Tucked away in a quiet office in Bergen, Norway’s second city, there’s a revolution underway. Here a small group of sensor-technology experts and software developers are putting the final touches to the first phase of a breakthrough set to transform the world of shipboard connectivity and maritime safety. This is the office of ScanReach, the first company bringing full wireless IoT-connectivity to vessels.

The team is poised to launch its company and technology at this year’s NorShipping in June. By this time, the low cost, high value, wireless plug and play technology will be approved and certified by DNV GL, adopted by several blue-chip collaborators, and will also have become an integral component of both the DNV GL Veracity and Kongsberg KognifAi digital platforms. And this is just the beginning. 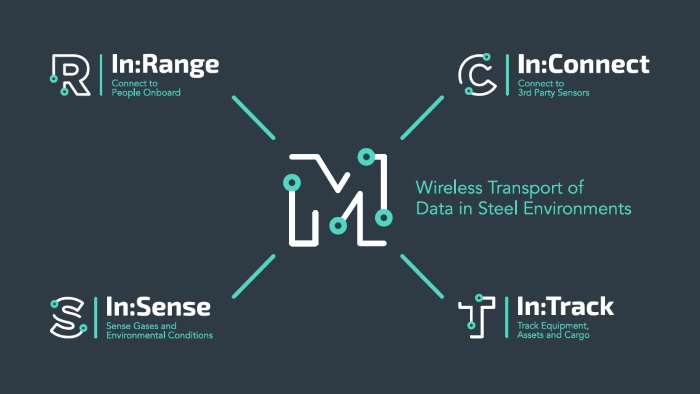 From a small start-up whose principals had a clever idea back in 2015, ScanReach has arrived at the point where its systems can now transform the maritime market, superseding existing ship and offshore safety procedures. The team’s smart, low-power, IoT wireless microsensor technology overcomes a challenge which, until now, has proved insurmountable to technologists and marine electronics engineers.

ScanReach has found a way to transmit sensor-based data through steel to provide a robust on-board emergency response system, tracking the condition and whereabouts of all persons on board in real time – with optimal efficiency and cost.

In addition to individuals, the ScanReach technology – based on a combination of frequency control, sophisticated algorithms and protocols – can monitor compartments and hard-to-access void spaces on a ship or offshore asset, as well as monitoring and wirelessly transmitting real-time ship operating data to a central control unit on the bridge or special control room.

Any changes to the monitored individual, space or component is immediately picked up by the closest microsensor and relayed automatically to alert senior personnel, who can then take remedial action if necessary. The information can also be shared with other remote locations including fleet management offices, emergency services, insurers and performance monitoring specialists.

The wireless system, named In:Range, works on a meshed network of microsensors each of which makes sure that the network is complete, rendering existing and expensive cable monitoring systems redundant. The plug-and-play system can be simply installed throughout a ship or offshore asset in a matter of hours, at a fraction of the cost of traditional arrangements, which often involve many kilometers of cabling and complex installation processes.

It is a unique technology, penetrating steel bulkheads to provide asset managers with a complete picture of persons on board, including their location and any risk to their wellbeing. Should a sensor fail as a result of fire or explosion, for example, the meshed set-up ensures that adjacent sensors pick up the failure which will becomes immediately evident to control unit personnel. The microsensors can also track any change in the conditions prevailing in void spaces such as temperature, pressure or the presence of gas. Inaccessible void spaces can be monitored just as easily as frequently used compartments, cargo tanks and holds.

Jacob Grieg Eide is Chief Business Development Officer at ScanReach. He studied naval architecture at Strathclyde in the UK before taking a Masters in industrial design.

“We are sitting on some of the world’s most disruptive safety technology,” Eide proclaims. “There are probably about 100,000 ships and many more offshore assets that could immediately benefit from our wireless sensor-based system to transform the safety of people and assets at sea.”

He refers to shipping economist Martin Stopford who, he points out, has repeatedly called for shipping to embrace smart technology to raise operating efficiency and streamline maritime links in the global supply chain. This ground-breaking technology now enables major gains not only in safety, but also makes possible huge strides in the efficiency which Stopford has been calling for, Eide says.

“In order to obtain onboard connectivity expensive and complex cabling networks are now obsolete,” he continues. “Our on-board wireless meshed network enables secure connectivity throughout the steel structure of ships and offshore units, and our system has already been successfully tried and tested through our cooperation with North Sea Shipping. Last April, we installed a system with a meshed network of more than 100 microsensors, and 120 personnel tags, throughout the North Sea Giant, one of the world’s most complex subsea construction vessels. The results have been great.”

Eide explains the background and the catalyst for the development. Shipping’s fundamental business model has not changed much for many decades and, until now, has not required a lot of detailed management from shore. But that era, Eide and his colleagues believe, is coming to an end.

Now, information and connectivity are vital in enabling shipping company managers to operate a fleet of ships in the same way as BMW executives manage a car factory. Ship operation, navigation and safety can become semi-automated, and the ocean leg can be neatly integrated with port operations at the beginning and end of a sea voyage, as well as landward links with other transport modes. Global logistics can become a door-to-door integrated supply chain from which more value can be squeezed.

Nor-Shipping will see ScanReach officially launch In:Range, In:Track, In:Sense and In:Connect, mesh-based connectivity systems designed for safety and secure information transfer respectively. In:Range tracks and monitors persons on board. Seafarers, contractors based on a ship or offshore unit, and passengers on an expedition cruise ship, for example, will wear ‘tags’ on their wrists and can be tracked in all parts of the ship or rig.

In the event of an emergency, their location on board and their condition are immediately evident and any absences at muster stations can be quickly and effectively noted and addressed. On board the advanced North Sea Giant, there are typically more than 120 persons – crew and contractors – and In:Range would have dramatic implications for their safety in potentially dangerous situations. Feedback from the system also provides valuable data allowing ship and rig operators to fine-tune their safety systems.

Following In:Range, the company will be extending its meshed microsensor systems to build intelligence and track other variables on board ships and offshore units. Systems which now use cables can now be remodelled to work on meshed microsensor networks and there are a wide range of possible applications. In addition to In:Range, ScanReach will launch solutions for tracking assets, cargo and equipment named In:Track. For sensing gases and environmental conditions in compartments and void spaces they will launch In:Sense. A solution for connection to third party sensors has also been developed making their wireless sensors quite complete.

Eide stresses that ScanReach’s technology is an open platform shipowners can build on to deliver maximum value.

He explains: “The value of any innovation can be gauged by its potential utility, and this edge-computing based solution – with the ability to extract data from any connected system or element – can be used for countless applications. The result is connected, smarter ships, enhanced efficiency and tremendous cost savings over conventional tech.”

As an example he notes that an undisclosed shipowner in the passenger vessel segment recently decided to test utilising ScanReach technology for water monitoring.

“They were going to install a cabled solution that would have carried a seven figure price tag,” Eide comments. “However, we were able to give them the option of simply fitting a low cost sensor in the relevant area, which could then be connected to the meshed system. It is effectively a ‘no brainer’ for forward-thinking shipping firms.

He adds that Bluetooth functionality will also soon be available. This will allow third-party sensors monitoring gas, for example, to become connected, possibly one at floor level and one at the top of a compartment. Any change in status would be noted. Similarly, the condition of cargoes which are prone to liquefy or combust spontaneously could be monitored, possibly with far-reaching insurance implications.

Clearly, the company has a broad target market, but what are its priorities? Eide says that its primary aim is to target companies for whom safety is top of the agenda and, in that respect, offshore energy companies and contractors are high on the list. But he is keen to stress that ScanReach is truly a game changer, about to impact the shipping industry with breakthrough technology “For the first time, ships will have full, reliable and high-quality IoT enabled by ScanReach’s ship-wide solutions. The safety and operational benefits of this technology are truly phenomenal,” he concludes. “Revolutionary, in fact.”
Source: ScanReach