The Korean Meteorological Agency has predicted a warmer winter early-next year, compared to its earlier forecast of colder weather in December on account of the La Nina effect.

The KMA highlighted a 40% possibility of higher temperatures in January and February next year compared to previous years, implying that the temperature in early-Q1 will likely be relatively milder. 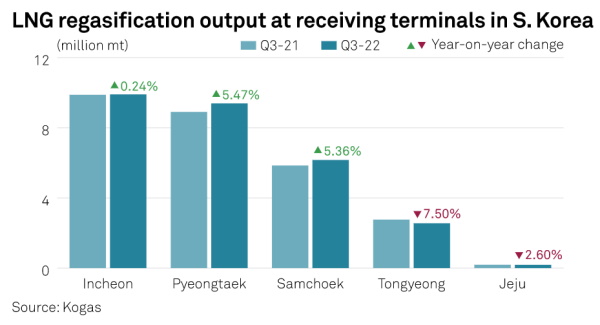 Kogas was heard facing high inventory levels at its major terminals in Incheon and Pyeongtaek, according to multiple market sources.

“The company asked for deferments, and some suppliers agreed,” a source at one of the producers said. “[I heard] they are in discussions to divert to other [South] Korean terminals.”

“I heard Kogas faced tank-top, with leakage level at around 93% at one of their tanks two to three weeks ago,” a trader based in Singapore said, adding: “They are considering leasing private import terminals like Gwangyang to manage their high storage levels.”

Another trader in Singapore said, “I doubt whether private LNG importers’ terminals can be rented out, as they also might have faced high inventory situations.”

Kogas owns five out of the seven regasification terminals in the country, which includes Incheon, Pyeongtaek, Samcheok, Tongyeong and Jeju — accounting for about 89% of the total capacity in the country. The company has a combined LNG storage capacity of around 11.6 MMcm, according to market sources.

The utilization rates at the Pyeongtaek terminal rose 5.47% on the year to around 9.39 million mt in the third quarter, while those at Incheon and Tongyoung terminals were higher by 0.24% and 5.36%, respectively, to 9.907 mil mt and 6.166 mil mt during the same period, according to the company data.

“There are some talks that they [could] resell some of the prompt December and January cargoes bilaterally,” a third trader based in Singapore said.

A South Korean trader based in Singapore said, “The overseas subsidies can resell the spot cargoes, but I am not sure whether the headquarter can approve the resales easily.”

Kogas did not immediately respond to a request for comment when reached out by S&P Global.

“If there is an overhang in supply, they might consider diverting the excess volumes to nearby countries, such as China or Japan; hence, the high inventory might be consumed once the cold winter weather kicks off,” an industry source based in South Korea said.

“The ‘tank-top’ issue has been taking place almost every winter, as the state-run entity put the high priority on the supply security,” another South Korean market source said earlier, adding: “China used to be the ‘last resort for most Asian LNG importers who tend to overly-purchase the winter LNG volumes ahead of the winter season. However, the situation this year looks more severe than in previous years.”

Against this backdrop, sluggish demand on account of COVID-19 lockdowns in China further dampen possibility of diverting excess cargoes.

“Tank-top’ [is] still ongoing, [we are] considering reselling, floating cargoes and leasing ship, or time swap,” a source at one of the Chinese state-owned companies said.

Meanwhile, there is still room to resell cargoes to local entities.

“Although Kogas is facing high inventory, certain buyers like SK E&S might need more spot cargoes due to the delayed restart of the US Freeport LNG,” a trader based in South Korea said, adding that all depends on the restart schedule, which is projected around mid-December.