On 1 September 2021, PAO Sovcomflot, SMART LNG (a joint venture between PAO Sovcomflot and PAO NOVATEK) and Far Eastern Shipbuilding and Ship Repair Center (FESRC, a subsidiary of Rosneft) entered into a trilateral agreement to cooperate on the development of a ship repair cluster in Russia’s Far East.

The signing ceremony took place on the eve of the VI Eastern Economic Forum as part of a trilateral workshop at the Zvezda Shipbuilding Complex (Primorsky Region).

The agreement was signed by: Andrey Shishkin, CEO of FESRC and Vice-President for Energy, Localisation and Innovation of Rosneft; Igor Tonkovidov, President and Chief Executive Officer of Sovcomflot, and Sergey Frank, Chairman of the Board of Directors of SMART LNG. 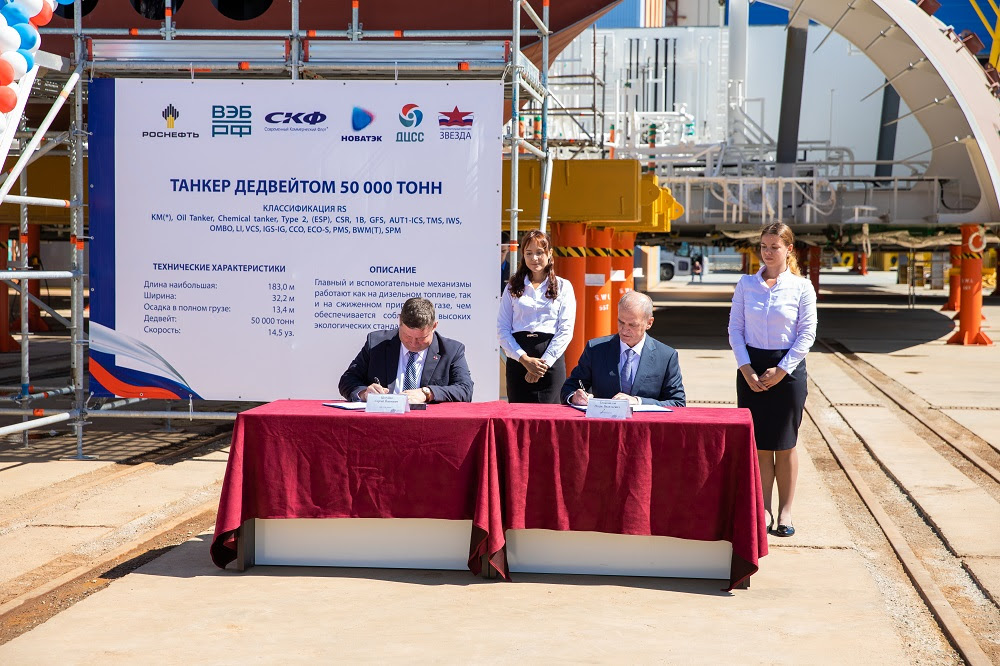 The agreement pertains to the expansion of cooperation between the parties on servicing and repairing vessels and vessel equipment using ship repair cluster’s facilities.

Cooperation between Sovcomflot, Russian energy companies and financial institutions made it possible to localise new civilian shipbuilding technologies in Russia and create the country’s first serial production of modern large-capacity cargo vessels, based at Zvezda. This will serve as the foundation for the further development of a shipbuilding and ship repair cluster in Russia’s Far East.

The same day at Zvezda, a keel-laying ceremony was held for a new 51,000-dwt MR product carrier ordered by SCF to transport gas condensate in the Baltic under a 20-year time charter to NOVATEK. The vessel is designed to use LNG as its primary fuel, which will enable a reduction in vessel emissions. In total, three such tankers have been ordered by SCF from Zvezda, scheduled for delivery in 2022–2023.
Source: PAO Sovcomflot