All eyes are on how fast Saudi Arabia can restore production after this weekend’s devastating strike on key facilities, which knocked out roughly 5% of global supply and triggered a record surge in oil prices.

Significant volumes could come back within days, people familiar with the matter said over the weekend, adding that it could still take weeks to restore full capacity. Industry consultant Energy Aspects estimated that the country will be able to restore almost half the lost production as early as Monday. Saudi Aramco said Saturday that it would provide an update in about 48 hours. It didn’t immediately respond to requests for comment Monday.

“We need to know if it’s a 48-hour outage or if it’s a four-week outage,” Ashley Peterson, a senior oil market analyst at Stratas Advisors, said on Bloomberg TV. “That’s really what’s going to drive prices.”

The estimated 5.7 million barrels a day of lost Saudi oil is the single biggest sudden disruption ever, surpassing the loss of Kuwaiti and Iraqi supply in August 1990 and Iranian output in 1979 during the Islamic Revolution, according to data from the International Energy Agency. 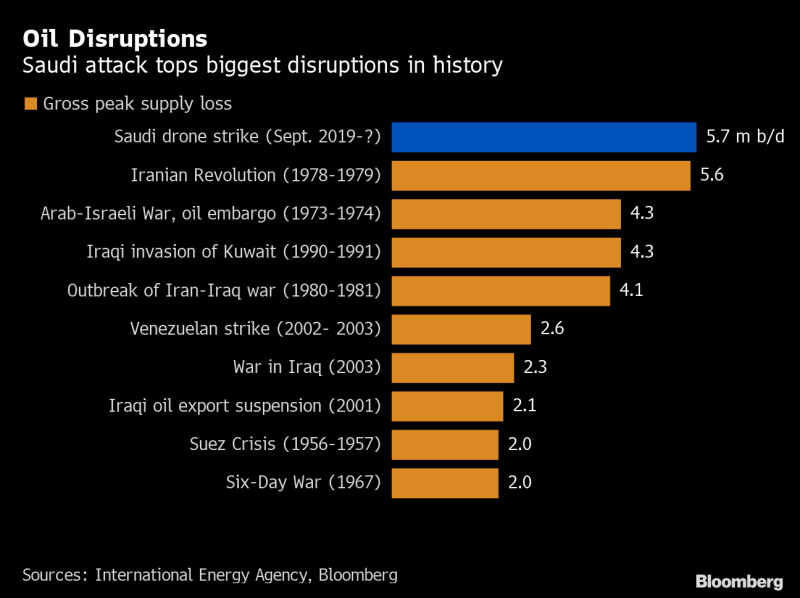 Here’s How Asian Governments Are Reacting to the Aramco Attack

In addition to the immediate loss of supply, the attack raised the specter of U.S. retaliation against Iran, which it blamed for the strike. While Iran-backed Houthi rebels in Yemen claimed responsibility for the strike, which they said was carried out by a swarm of 10 drones, several administration officials Sunday said they had substantial evidence Iran was directly responsible. President Donald Trump tweeted the U.S. is “locked and loaded depending on verification” that Iran was the real source.

“We expect oil to rise by more than 5% in the short term or more than 20% if impact is protracted,” analysts at Sanford C. Bernstein & Co. wrote in a note. “But much depends on what Aramco says around how quickly production can be restored.”

The attack Saturday struck the world’s biggest crude-processing facility in Abqaiq and the kingdom’s second-biggest oil field in Khurais, exposing a vulnerability at the heart of the global oil market.

“No matter whether it takes Saudi Arabia five days or a lot longer to get oil back into production, there is but one rational takeaway from this weekend’s drone attacks on the Kingdom’s infrastructure — that infrastructure is highly vulnerable to attack, and the market has been persistently mispricing oil,” Citigroup Inc.’s Ed Morse wrote in a research note.

Trump authorized the release of oil from the U.S. Strategic Petroleum Reserve, while the International Energy Agency, which helps coordinate industrialized countries’ emergency fuel stockpiles, said it was monitoring the situation.

The attack is the most serious on Saudi Arabia’s oil infrastructure since Iraq’s Saddam Hussein fired Scud missiles into the kingdom during the first Gulf War.

Saudi oil facilities as well as foreign tankers in and around the Persian Gulf have been the target of several attacks over the past year. The escalation coincided with the President Trump’s decision to pull the U.S. out of the 2015 nuclear agreement with Iran and re-imposed crippling economic sanctions against the Islamic Republic. The Houthis, who are fighting Saudi-backed forces in Yemen, have claimed responsibility for most of the strikes against Aramco installations.

Aramco will be able to keep customers supplied for several weeks by drawing on a global storage network. The Saudis hold millions of barrels in tanks in the kingdom itself, plus three strategic locations around the world: Rotterdam in the Netherlands, Okinawa in Japan, and Sidi Kerir on the Mediterranean coast of Egypt.

Before the attack, Saudi Arabia was pumping about 9.8 million barrels a day, almost 10% of global production. Aramco could consider declaring itself unable to fulfill contracts on some international shipments — know as force majeure — if the resumption of full capacity at Abqaiq takes weeks, people familiar with the matter said, asking not be identified before a public statement.

Instead of supplying some customers with the usual crude oil grades of Arab Light or Arab Extra Light, the company may offer them Arab Heavy and Arab Medium as a replacement, according to a person familiar with the matter.

A satellite picture from a NASA near real-time imaging system published early on Sunday, more than 24 hours after the attack, showed the huge smoke plume over Abqaiq had dissipated completely. But four additional plumes to the south-west, over the Ghawar oilfield, the world’s largest, were still clearly visible.

While that field wasn’t attacked, its crude and gas is sent to Abqaiq for processing. The smoke most likely indicated flaring, the industry term for what happens when a facility stops suddenly and excess oil and natural gas is safely burned off.
Source: Bloomberg