Coal-fired power beat out wind-powered generation in 2021 despite expectations wind would top the fuel mix for a second straight year. Coal has been on the decline for years but averaged 35.6% of the 2021 total fuel mix, up 5 percentage points year on year, while wind averaged 34.6%, up nearly 3 points, and gas at 20%, down 6.5 points, according to final SPP calculations for the year.

“A big reason for this shift is the large increase in natural gas prices in 2021 compared to 2020,” SPP spokeswoman Meghan Sever said. “This resulted in coal being a more economic option, and it replaced some natural gas production. Wind contributed significantly during the fourth quarter of 2021, but it still came in slightly under coal.” 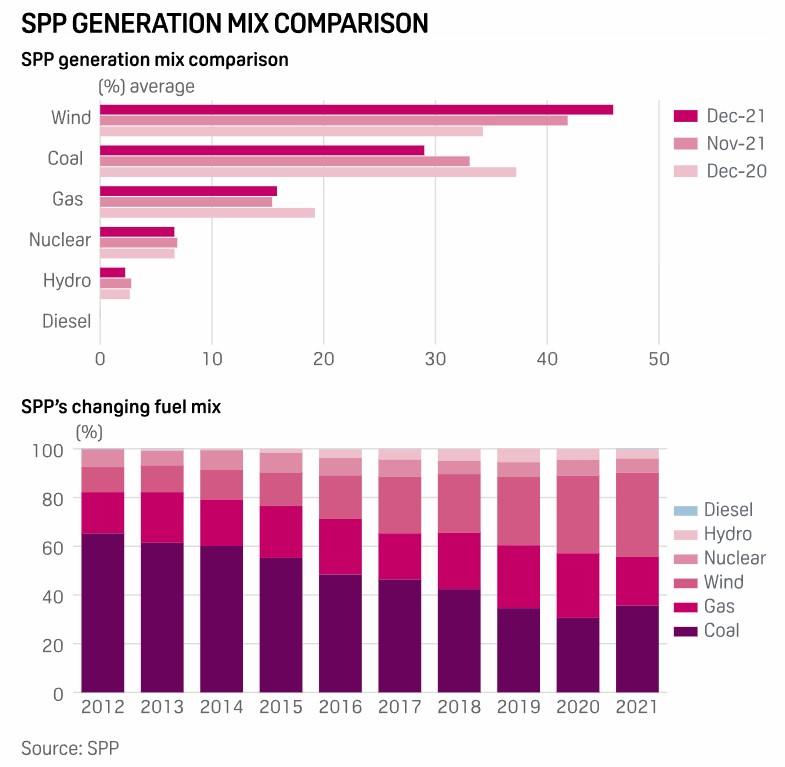 Natural gas prices were very high during the winter weather event in February but have stayed at an elevated level due to supply issues, Sever said.

“If natural gas prices stay at these levels in 2022, the natural gas to coal split will likely be similar to 2021, making it more difficult for wind to be the top producer next year,” Sever said.

Spot gas at Panhandle Texas-Oklahoma averaged $3.416/MMBtu in December, 44.2% higher year on year, after reaching an all-time high of $224.56/MMBtu on Feb. 13, according to S&P Global Platts pricing data.

Higher gas prices led gas generation to slip 3.4 percentage points year on year to average 15.8% of the total fuel mix in December, according to SPP data. At the same time, coal generation sank 7.8 points to average 29.4% of the mix.

Filling in the gap, wind generation climbed 11.7 points year on year to lead the fuel mix at 46% for December, the highest monthly average since March and a December monthly record, but it wasn’t enough to nab the top fuel spot for 2021. 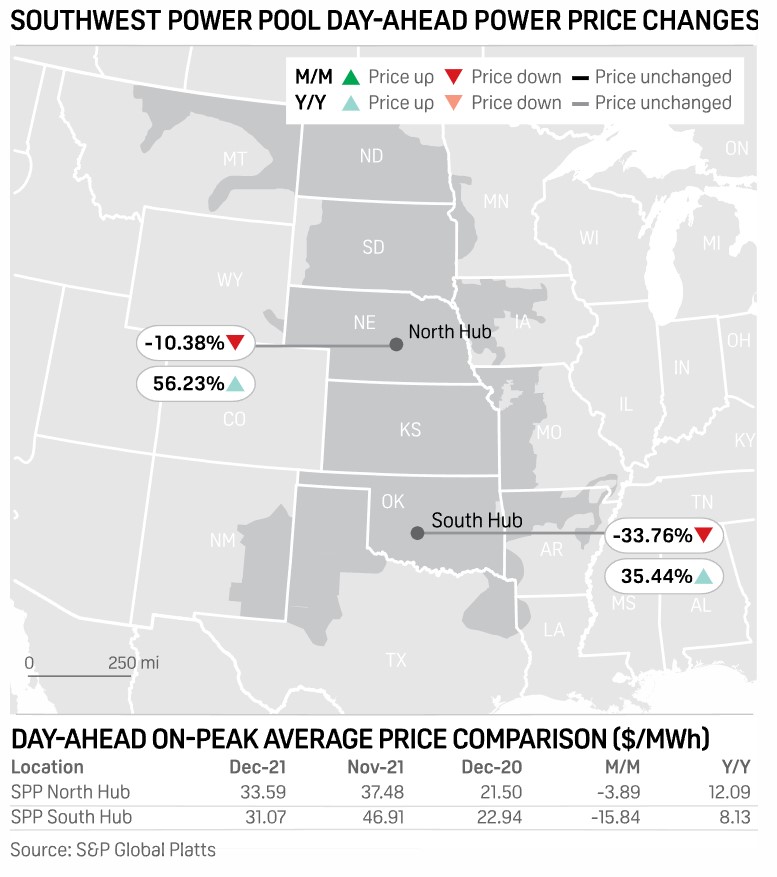 Power prices climbed even as peakload fell 4.4% year on year to average 31.265 MW in December. Population-weighted average temperatures were 26% higher than normal leading to 35% lower heating-degree days, according to CustomWeather data.

SPP loads trended near the bottom of the five-year range as warmer-than-normal weather limited heating demand in December and drove heating-demand to the lowest level December since at least 2005, according to Platts Analytics. 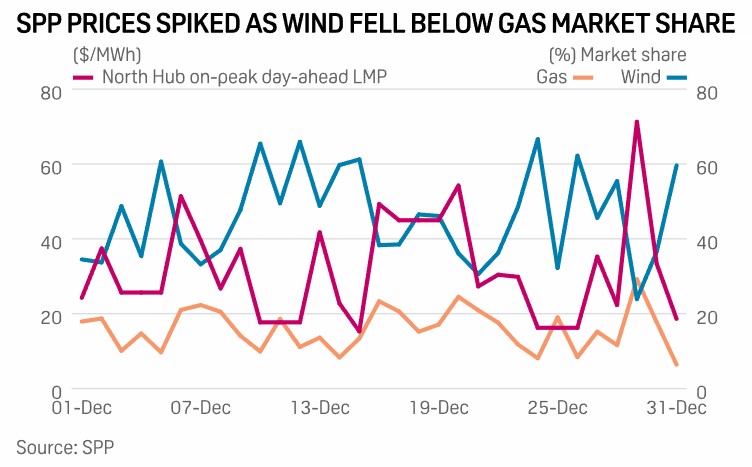 “Any day-to-day volatility in wind is magnified when it comes to prices by the relatively slow ramp-up or ramp-down of coal plants, inherent to the technology,” Giuliano Bordignon, power analyst with S&P Global Platts Analytics, said about strong wind generation combined with a limited dispatch of gas across SPP in December. “This means that price swings can be larger than in other months.”

Power forwards continue to trend well above year-ago packages following higher gas forwards, although both dipped month on month. With the lower gas forwards month on month, Platts Analytics expects SPP daily gas generation to average more than 111 GWh/d in February, which would result in a daily power burn of about 0.92 Bcf/d, assuming heat rates similar to February 2021. 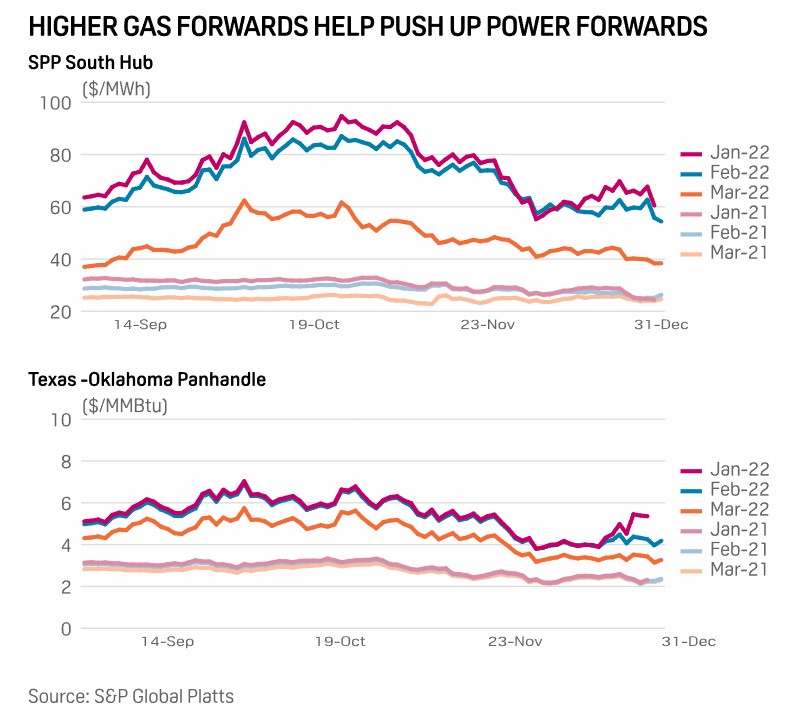 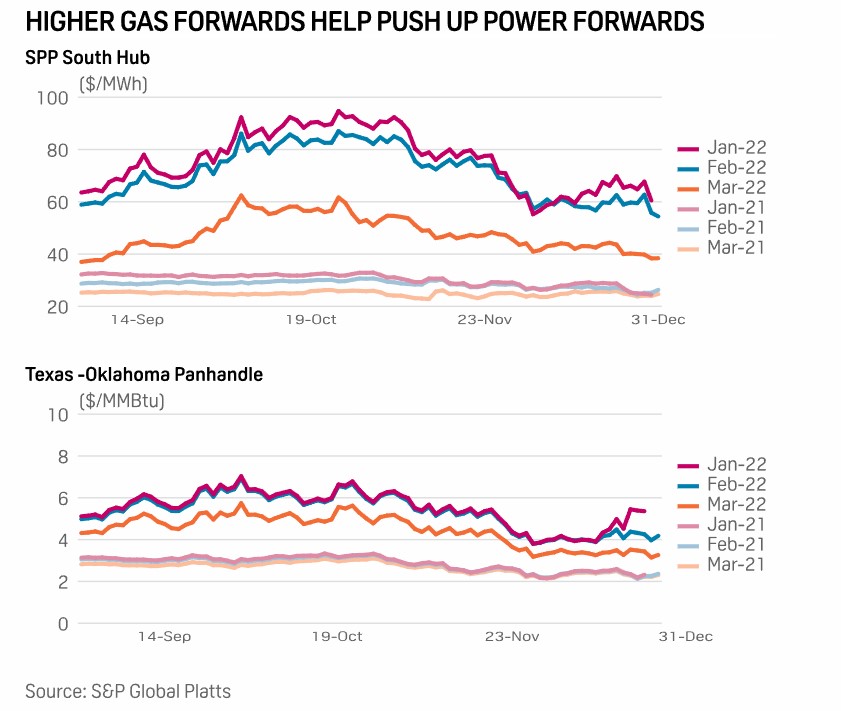