Stalling Chinese coal imports are not due to trade tensions

Although many of China’s major bulk imports, such as iron ore and crude oil, have seen strong growth so far this year despite the COVID-19 pandemic, imports of coal have followed the opposite trajectory.

Staggering high growth in January through April has been replaced with monthly coal import growth rates in May through August below the levels recorded in the same months of 2019.

This year’s coal import volumes have seen the lowest growth rate in the past three years. In the first eight months of this year, 220.7 million tonnes of coal have been imported by China, just 473 thousand tonnes more than in 2019, recording a 0.2% growth.

The strong start seen in the beginning of the year when imports saw a 33% accumulated growth rate in the first two months, was merely a consequence of the low volumes imported in the last months of 2019. The following months have seen much lower volumes with August imports at 20 million tonnes, the lowest import level of 2020.

“The drop in coal imports has resulted in less business for the dry bulk fleet. Between May and August this year, there were 26.2 million tonnes less imported compared to the same period last year. The drop in volumes means that ship owners lost an equivalent of 351 Panamax loads,” says Peter Sand, BIMCO’s Chief Shipping Analyst. 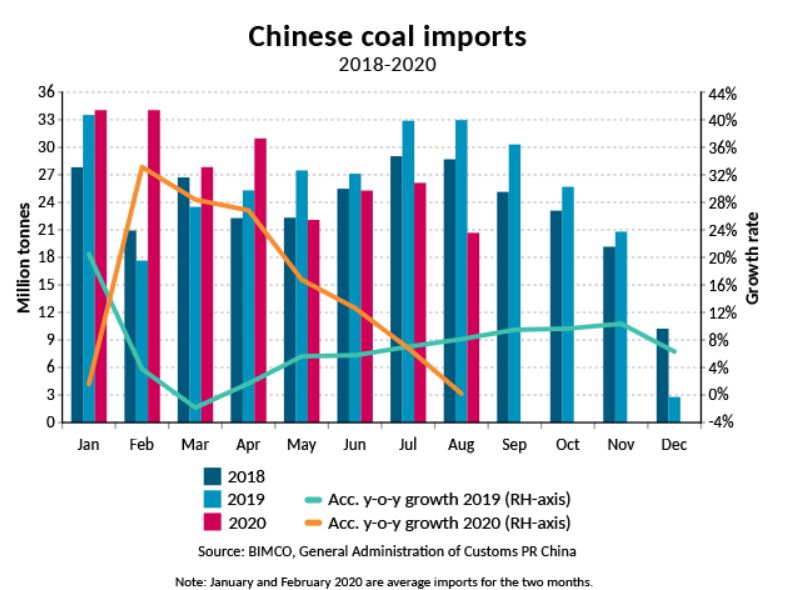 The vast majority of coal imported by China arrives by sea, primarily from Indonesia and Australia as the largest suppliers by far.

Indonesian imports account for the largest share of total Chinese coal imports. So far this year, China has imported 96.2 million tonnes from Indonesia, 45% of the total. Despite the Indonesian imports being 7 million tonnes lower than in the first eight months of 2019, they are up 2.5% from the same period in 2018. Indeed, a steady supplier of thermal coal to China.

In close second, imports of Australian coal account for 42% of total Chinese coal imports. Australian coal exports to China have dropped by 8 million tonnes from 2019 levels, sitting at 90.2 million tonnes in the first eight months of this year. However, compared with 2018 volumes, the accumulated volumes in the first eight months of 2020 are 3% higher. 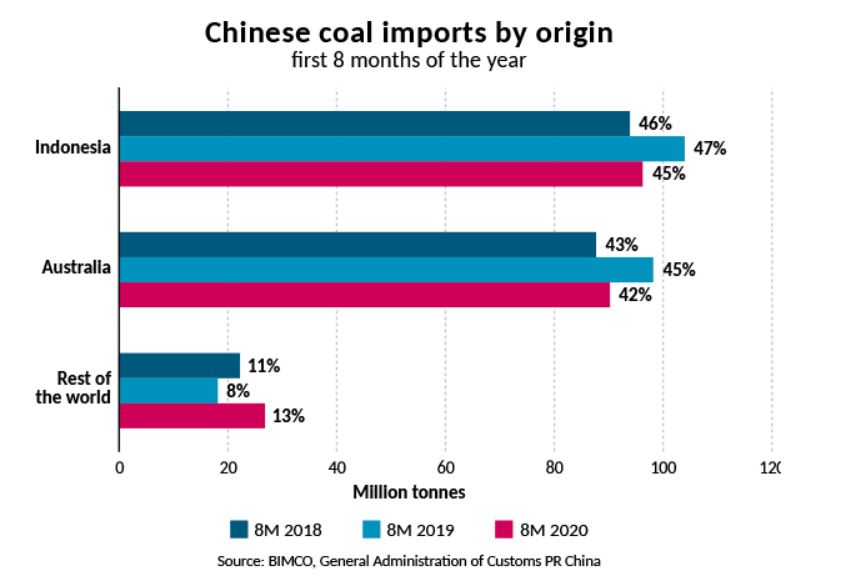 “Despite short sailing distances for the majority of Chinese coal imports, they still represent an important driver for the dry bulk market, and the lower volumes in recent months are a drag on the market,” Sand says, adding:

“In recent years, shipping has become particularly vulnerable to geopolitics and the tensions between Australia and China are now in the spotlight. So far, coal imports have yet to see any major impact, but if the relationship between the two continues to deteriorate, ship owners may see a boost in tonne miles if China replaces Australian coal with coal sourced from more distant countries.”.

Although strong growth rates in Chinese imports of iron ore and crude oil seem to depict a swift recovery in the Chinese economy, coal imports, together with Chinese coal output, portray a different story.