Ferry company Stena Line moves its Nynäshamn ferry terminal to the newly built Stockholm Norvik Port. On November 9th the terminal was officially opened with the first arrival of the vessel Stena Flavia at 7 a.m. The new ferry terminal is an important part of Stena Lines expansion plans in the Baltic Sea that includes the deployment of two new modern ferries and 30 % additional freight capacity on the Nynäshamn-Ventspils route in 2021.

Stena Line is one of the world’s leading ferry companies with 18 ferry routes in Europe. Three of them are operating across the Baltic Sea. Stena Line recently announced an expansion on the Nynäshamn-Ventspils route with the deployment of two large modern RoPax-vessels during 2021, adding both freight and passenger capacity. The move to Stockholm Norvik Port strengthen this position even further.

“The move to the new ferry terminal is an important part of our expansion in the Baltic Sea and enables us to continue to grow together with our customers. In January we expect the first of the two new vessels to start operating, adding another 30 % freight capacity to the route, says Johan Edelman, Trade Director Baltic Sea North at Stena Line. 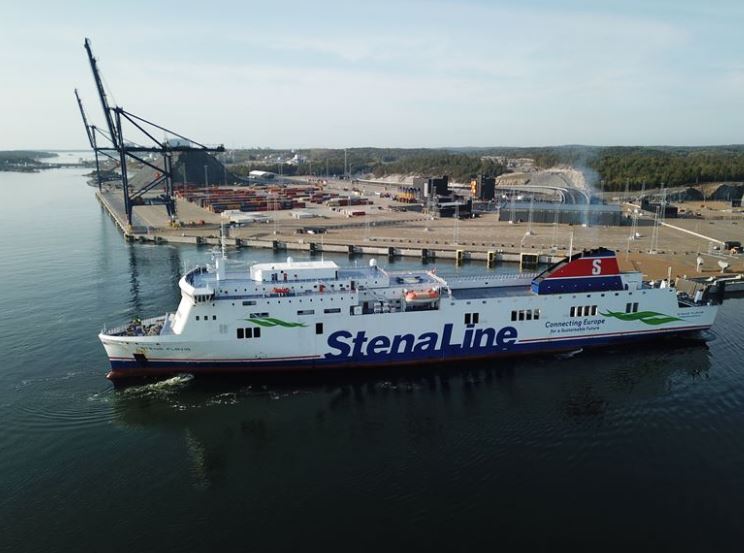 Stockholm Norvik Port is a brand new roro and container terminal with direct access to one of the fastest growing regions in Europe. The new modern ferry terminal will offer efficient and sustainable logistics solutions with increased capacity and warehouse cross docking facilities as well as strong intermodal connections to the rest of Sweden.

“With the strategic location of Stockholm Norvik Port, state-of-the-art infrastructure and great opportunities for storage and load handling, we have created completely new prerequisites for our customers. We warmly welcome Stena Line to Stockholm Norvik Port. We are very pleased with our many years of collaboration and also that Stena Line has chosen this commitment to the Baltic Sea’s new mega-port,” says Johan Wallén, Marketing and Sales Manager at Ports of Stockholm.
Source: Stena Line