The pound fell sharply on Wednesday on growing expectations that Prime Minister Theresa May will again fail to get her Brexit deal approved and could soon face a leadership challenge.

Sterling has weakened more than 1% this month as deadlocked cross-party talks expose deep political divisions over how, when and even if Brexit should take place.

May plans to put forward her thrice-rejected Brexit deal in the week beginning June 3, to try to secure an agreement before lawmakers go on summer holiday.

But Britain’s opposition Labour Party said it would not ratify the deal if a compromise agreement is not reached with the government.

Those comments fuelled speculation that May will soon be ousted and pressured the pound.

“Failure to pass the deal [in June] could well see May finally step down, opening the door for a more eurosceptic prime minister and a possible hard Brexit,” said Petr Krpata, an FX strategist at ING in London. 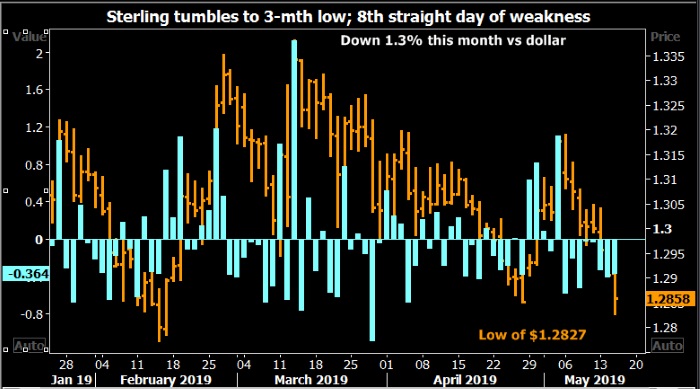 Sterling has fallen for eight consecutive days against the dollar despite mostly solid economic data in Britain in recent months.

A worry for investors is that months of inventory stockpiling by British companies before Brexit will show up this quarter.

British employment data on Tuesday showed wage growth in the quarter ending March was lower than expected, signalling the possible start of a turbulent period for the broader economy.

Volatility in currency markets is historically low and in recent weeks investors have curtailed their bets on big swings in the pound.