Sky-high valuations and signs that the flood of cheap cash washing around financial markets may be subsiding suggest the record-breaking run in shares is about to hit the buffers.

Banks including BofA, Morgan Stanley, Citi and Credit Suisse this week told clients to trim exposure to stocks. Some are predicting a sharp fall in prices.

Morgan Stanley is cautious on U.S. stocks and high-growth market segments that are very sensitive to rising interest rates, all the more so given September is a month when shares have typically tended to underperform.

In another possible warning sign, the equity risk premium — the extra return investors receive for holding stocks over risk-free government bonds — has turned negative for the first time since 2002, consultancy BCA Research noted on Thursday.

This week has already seen signs of nervousness, with MSCI’s World equity index down 1% from Tuesday’s record high.

The index has nearly doubled from March-2020 lows hit when pandemic hysteria triggered a firesale of assets. The gains have been oiled by vast amounts of stimulus from central banks as well as governments, while economic growth and corporate profits have recovered faster than expected.

Now the economic recovery may be running out of steam — as suggested by data from the United States and China — at the same time as bond yields could come under upward pressure from rising inflation and as policymakers begin a retreat from pandemic-era stimulus.

On Thursday, the European Central Bank took a small step towards dialling back bond purchases, following Tuesday’s decision from the Reserve Bank of Australia to stick with its tapering schedule.

Citi’s global markets strategist, Matt King, said his biggest concern was that the flow of public and private credit creation was on the cusp of turning negative, a significant moment for markets surfing the cheap cash waves.

The reduction in private-sector credit creation — which includes corporate and household debt — would increase market dependence on central banks as the “marginal sources of global liquidity”, just as policymakers take their foot off the pedal.

“It typically takes a positive delta (difference) to keep markets rallying — and immediate prospects for both the credit and the Covid deltas seem overwhelmingly negative,” he said.

“We cannot find any occasion when all the major components of the global credit impulse turned negative and there wasn’t a major sell-off somewhere,” he added. 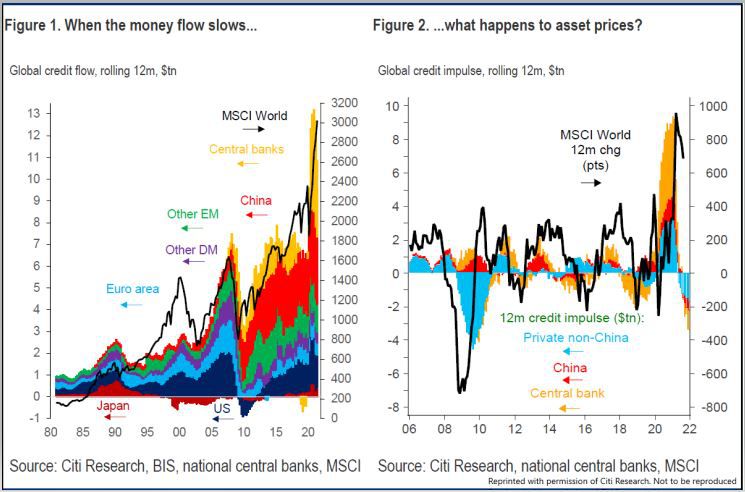 BofA strategist Savita Subramanian noted paintmaker PPG — among the companies whose fortunes are closely tied to the health of the economy — has just ditched its 2021 earnings guidance due to supply chain disruptions.

“Canaries are chirping,” she wrote in a research note, adding that her valuation model implies annual returns on the S&P 500 will average -0.8% for the next decade, the first negative forecast since the 1999 tech bubble.

“This may not end now. But when it ends, it could end badly.”

A put-call ratio on U.S. stocks signals investors are more bearish than at any time in 2021. 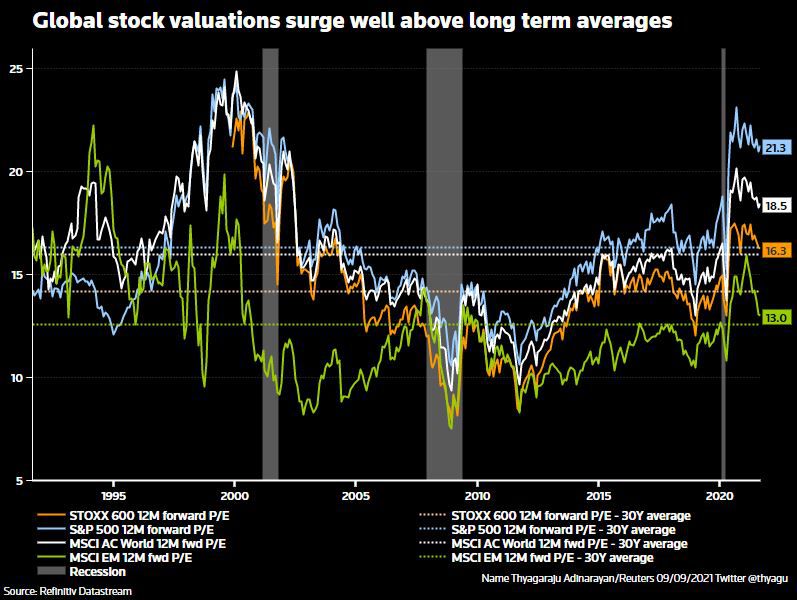 Others disagree that a market correction is imminent, saying fears of a peak in prices are overdone.

They point out that forces fuelling the rally — low yields and cash-flush investors — are intact. Small-time punters are pumping in cash too. JPMorgan estimates record year-to-date equity fund flows of almost $700 billion are dominated by retail investors.

As for the risk of a market selloff, Barclays analysts attribute the 2013 “taper tantrum” when markets tumbled to poor Fed communication, and say policymakers have since improved how they telegraph policy shifts.

They point out that by the time policy tightening actually started, markets had steadied.
Source: Reuters (Reporting by Tommy Wilkes and Saikat Chatterjee; Editing by Sujata Rao and Jane Merriman)