Closure of the Strait of Hormuz between Iran and Saudi Arabia would cut off most Middle East chemical exports, causing a severe chemicals supply shock, as well as a knock-on effect on demand from a big spike in oil prices.

The Strait is an important shipping route for chemicals produced in Iran, Kuwait, Qatar, the UAE, as well as sites along the east coast of Saudi Arabia.

Closure of the Strait would cut off chemical exports by sea from these sites to the rest of the world. Most product is transported by sea rather than road or rail in this region. 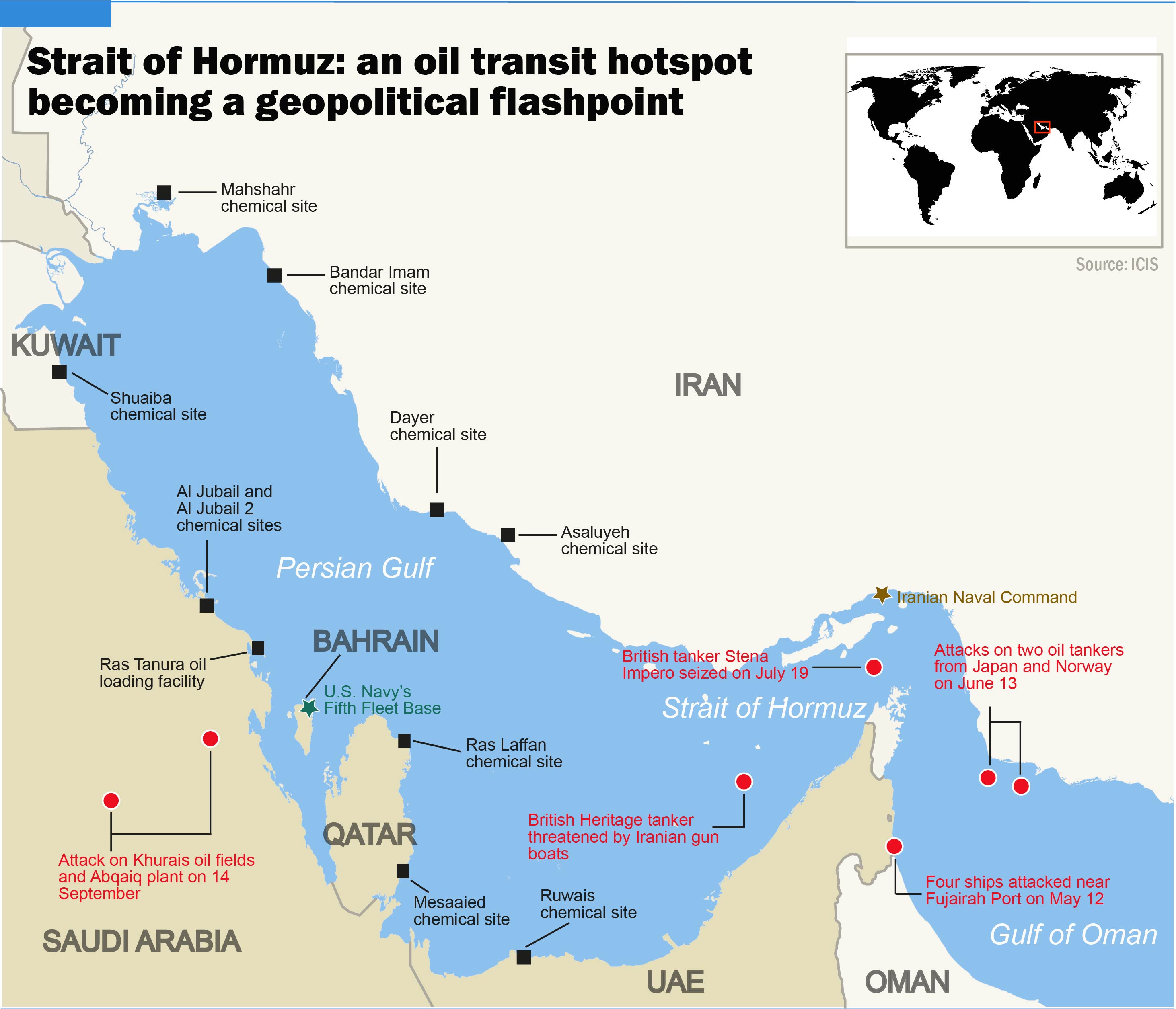 As well as the direct local impact, exports of chemical feedstocks such as natural gas liquids to other parts of the world could be curtailed.

The disruption would potentially be much more severe than that caused by the 14 September attacks on Saudi Arabia’s Khurais oil field and Abqaiq oil processing plant.

Chemical prices spiked but then fell back for most products because poor demand and ample supply from other sources compensated for any Saudi capacity losses. Insurance premiums have also risen for ships using the Strait, raising costs for chemicals shippers.

Closure of the Strait of Hormuz could have a more profound impact, with a higher proportion of supply disrupted and subsequent tightening of markets.

DEMAND SHOCK
The Strait of Hormuz is one of the world’s most important shipping lanes. Closure would likely cause an oil price spike. This could hurt the global economy at a time when growth is already slowing thanks to the US-China trade war, Brexit and other macro-economic factors. Higher oil prices suck money out of consumers’ pockets through increased fuel prices.

According to Sophie Udubasceanu, ICIS Global Crude Oil Editor, the Strait of Hormuz is , at the moment, the “elephant in the room,” keeping investors on edge and triggering questions over security of the ships travelling through.

She said: “The strait is one of the world’s major chokepoints, because it sees almost 21m bbl/day of crude, condensate and petroleum products passing through. That’s over 20% of the global petroleum related liquids consumption. There aren’t many ways to avoid it, only via pipelines in Saudi Arabia and UAE.”

A prolonged period of higher oil prices could even tip some economies into recession, hurting demand for chemicals further. Lower demand might reduce the impact of curtailed Middle East chemical supply to some extent.

John Richardson, ICIS senior consultant for Asia, said: “There would be an economic effect from oil prices potentially spiking to $100/bbl at a time of a trade war and potential recession in Europe. Clearly there would be a supply effect – less feedstock supplies for crackers outside the Middle East and less chemicals directly from the Middle East. But the impact on demand would also be very, very bad.”

ESCALATION
So far there has been no military response to the 14 September attacks. This could be because Saudi Arabia and the US would have a lot to lose from an escalation.

With the rise of shale gas and oil, the US is less reliant on Middle East oil than it once was. Being drawn into a conflict there could be expensive for the US financially. There would also be the risk of military response leading to another wider Middle East conflict.

Saudi Arabia is trying to diversify its economy beyond oil and needs foreign capital, expertise and partnerships to do so. These efforts would be thwarted by more instability in the region.

Richardson believes there is a less than 50% chance of this conflict escalating. He said: “[US president Donald] Trump doesn’t want a war ahead of an election. But by pulling out of the 2015 nuclear deal – which wasn’t perfect – he has pushed Iran into a corner and Iran feels it has less to lose by ramping up military action.”

A US study, supported by the UK, France and Germany, claims the attacks were orchestrated by Iran. Houthi rebels in Yemen said they were responsible for the bombings whilst Iran has denied all responsibility.

Saudi Arabia’s minister of state for foreign affairs, Adel al-Jubeir, this week told the BBC that all options are being considered, including military action against Iran.

Speaking at the United Nations meeting in New York on 25 September, US Secretary of State Mike Pompeo told reporters the country wanted “a peaceful resolution with the Islamic Republic of Iran”.
Source: ICIS, article by Will Beacham (https://www.icis.com/explore/resources/news/2019/09/26/10422706/strait-of-hormuz-closure-would-cause-chemicals-supply-shock-hurt-demand)