Why do financial markets behave the way they do?

Financial markets generally react to global and local events such as oil price wars or changes to a country’s inflation rate, which can influence consumer behaviour. However, economic events or conventional indicators don’t always explain why markets behave a certain way.

Some people believe that certain market fluctuations are caused by random or seemingly unrelated events – for example, the Chinese zodiac. Today, a variety of unofficial, unusual indicators are sometimes used alongside traditional gauges. While they are in no way meant to replace comprehensive technical and fundamental analysis, they may provide some interesting insights. Equally, it’s possible that the insights these unusual indicators provide are based on nothing more than coincidental correlations.

The effects of coronavirus have clearly been felt on the stock market, but some companies, including Netflix, have been thriving amidst the chaos. Netflix’s share price has soared since the start of 2020 (up by more than 45%), while subscribers increased by a record 15.8 million in the first quarter of the year.5 Many are attributing the company’s uptick in performance to the fact that more people have stayed home due to the global shutdown.

As for streaming services’ popularity during tough market conditions, research suggests that viewing time increases by up to 61% when a disruptive event such as Covid-19 happens.1 In 2019, Netflix users streamed an average of two hours of content a day, which rose to more than three hours during quarantine (for a combined daily total of nearly 204 million hours).2

If most people have returned to work by the end of 2020, the markets are likely to start recovering. As a result, the company expects to see a reduction in subscriber growth in the next two quarters, while there could also be a decrease in Netflix streaming hours. 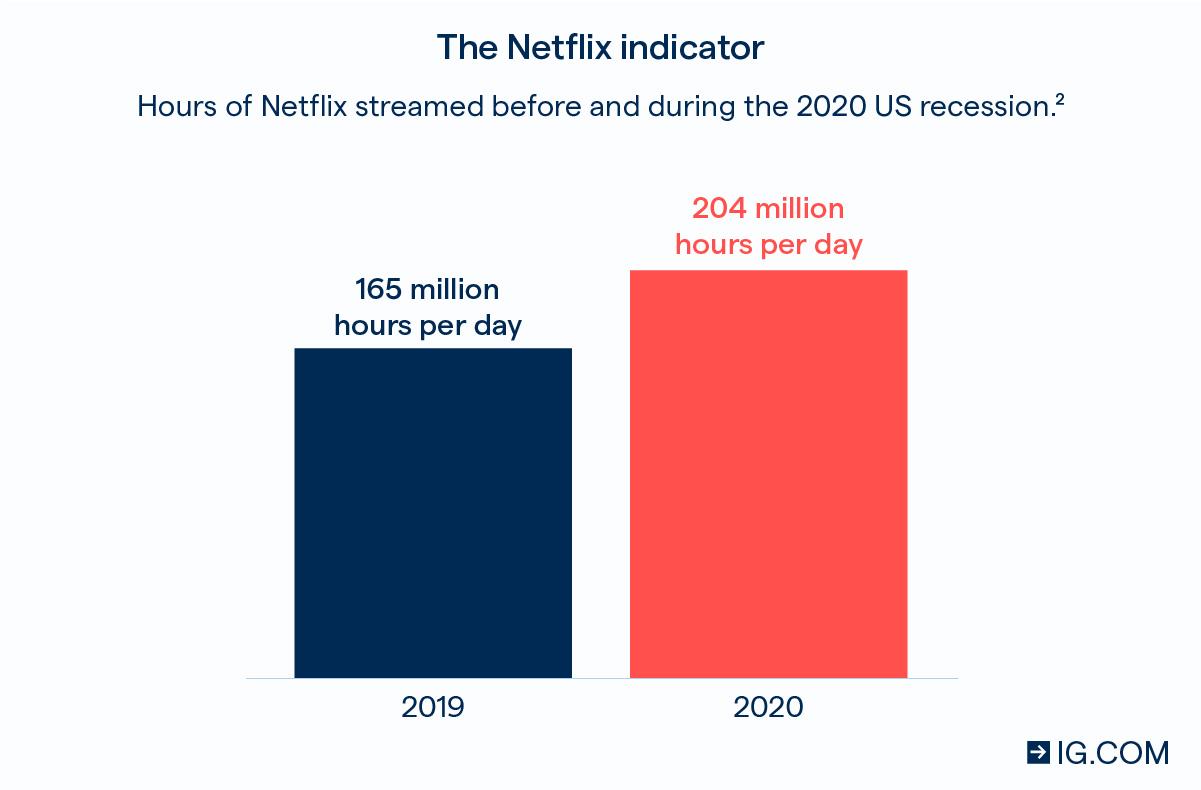 Those who follow the Chinese zodiac believe that the Year of the Dragon (last: 2012, next: 2024) brings good luck and prosperity – and also stronger market returns. In fact, since 1904, the Dow Jones has generated an average of 7.7% in returns during the Year of the Dragon.6 The average return of the index since its inception in 1896 has been just over 5.4%.7

This year (2020) is the Chinese Year of the Rat. The last time we moved into this zodiac was 2008, when feng shui masters predicted poor share price performance and recommended a stronger focus on commodities such as gold.

Is there a relationship between what happened in 2008 and at the start of 2020? Well, the Covid-19 crisis saw commodity trading volume (gold, crude oil, etc.) increase by 94.8% from February to March 2020, while shares trading was down by 17.3% over the same period.8 Further, both the FTSE 100 and the Dow Jones saw poor performance during these rat years.

However, while there are some parallels between different years of the Zodiac in terms of market performance, it is unlikely there is a causal relationship here. Instead, it is likely that the observed effect is nothing more than a coincidence, or can be explained by normal business cycles. 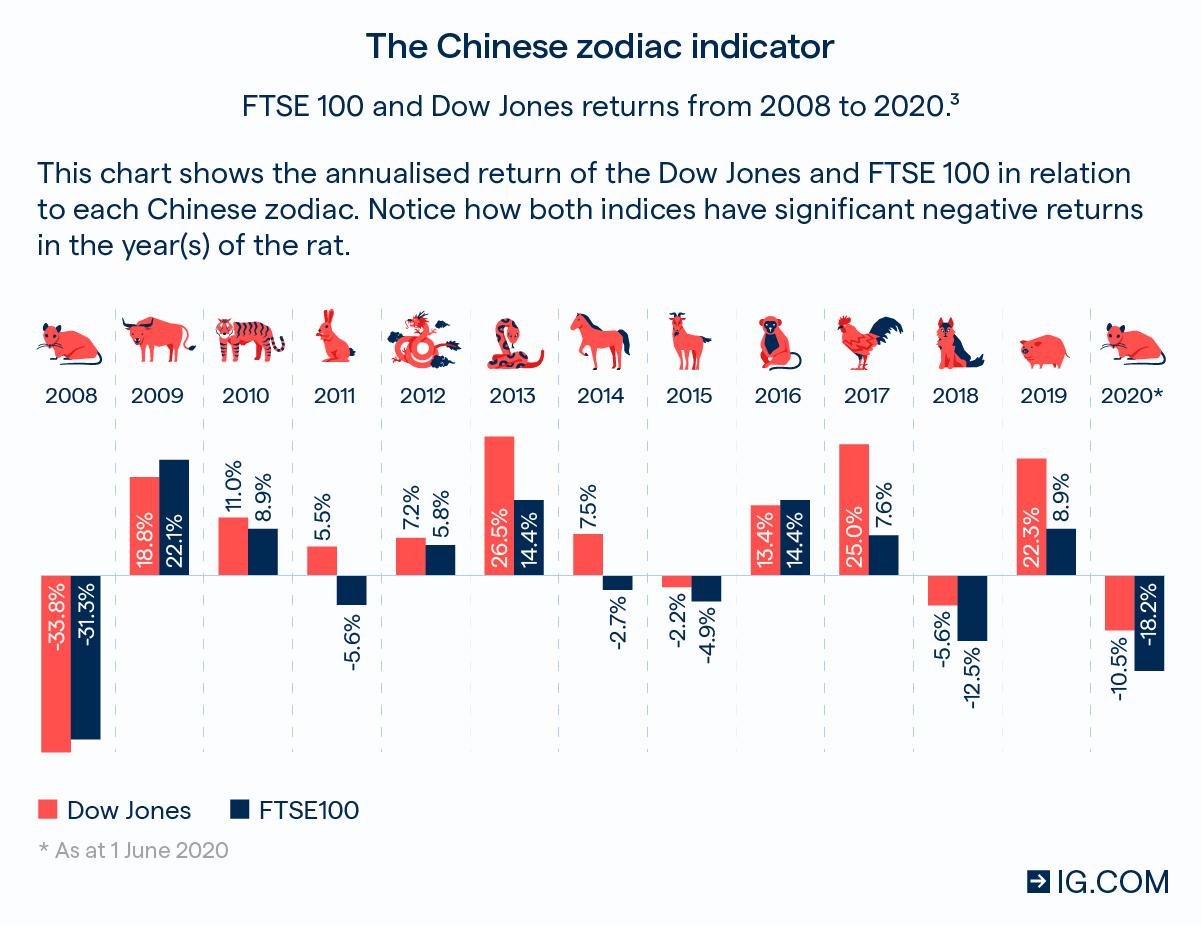 This strange economic indicator is said to imply market recovery following a recession. During hard times, consumers tend to buy more canned foods and budget lines in an attempt to save money. So, when there is a big shift in the value of sales, some traders and investors deduce that the tide is turning, as people have the money to buy fresh (more expensive) alternatives.

In April 2009 – in the midst of the Great Recession – the value of sales of baked beans in the US rose by more than 21% compared to the same month in 2008. Grocery store budget lines also showed a near 23% increase when measured over the same period. By June 2009, the recession was coming to an end and growth of only 9.9% and 8.7% was reported for June and July (compared to the same months in 2008).4

In March 2020, due to the Covid-19 crisis, the US entered into recession after 128 months of economic growth. Once again, consumer flocked to the stores to stock up on staples such as baked beans, powdered milk and flour for the quarantine period. The increase in sales of some of these products was as high as 245% (March 2019 compared to March 2020).10 This trend wasn’t limited to the US, though. A canned food producer in the UK saw a year-on-year sales surge of 72.5% in March 2020. 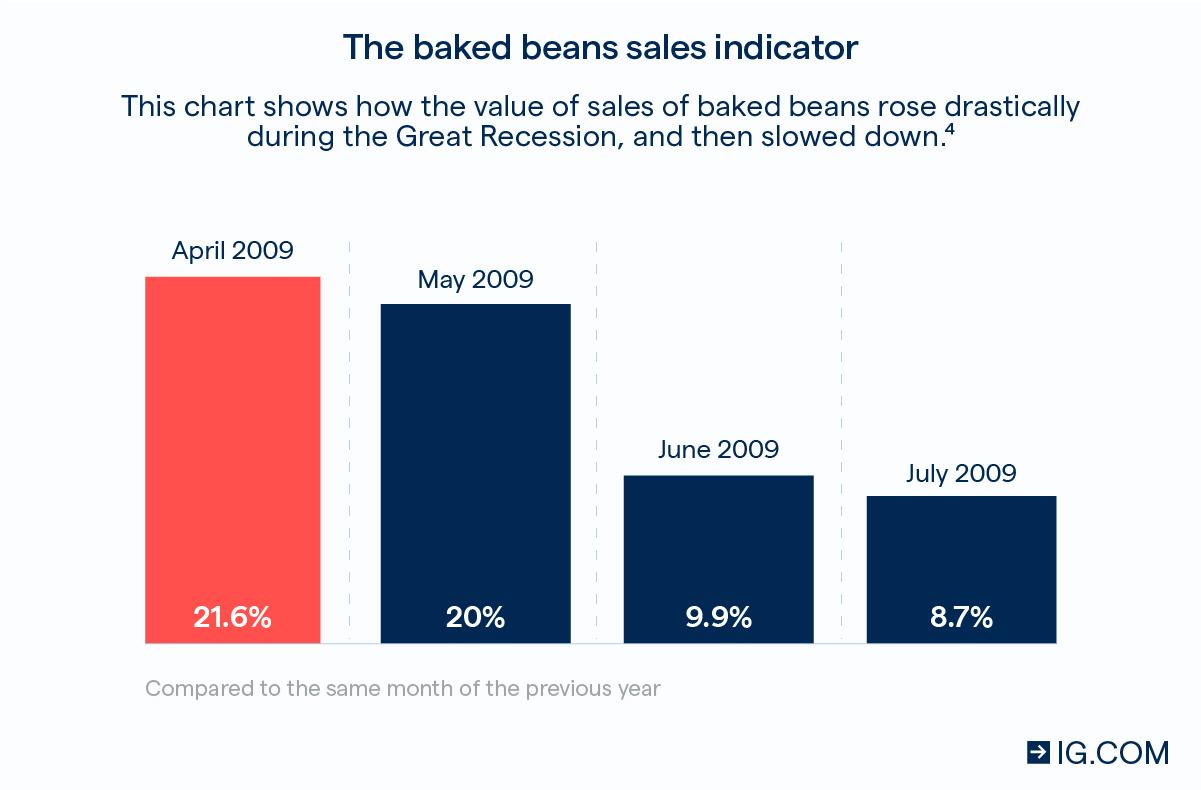 Some believe the nationality of the model on the cover of Sports Illustrated (annual swimwear edition) is an indicator of how the US markets will perform in the year ahead. The theory is that American models predict good news for the S&P 500, but that other nationalities spell less favourable returns for the index.

Examples of this phenomenon proving true can be seen in 2011, 2012 and 2013. A Russian model was chosen in 2011 and the S&P ended the year with a miniscule decline of 0.003% – the smallest annual market move for the index since 1950.12 In the two years that followed, an American model graced the cover and the S&P posted an increase of more than 13% and 29%, respectively.3

The last time the swimwear edition was released was in 2019. The magazine chose three American models for the cover and the S&P 500 returned just below 29%. 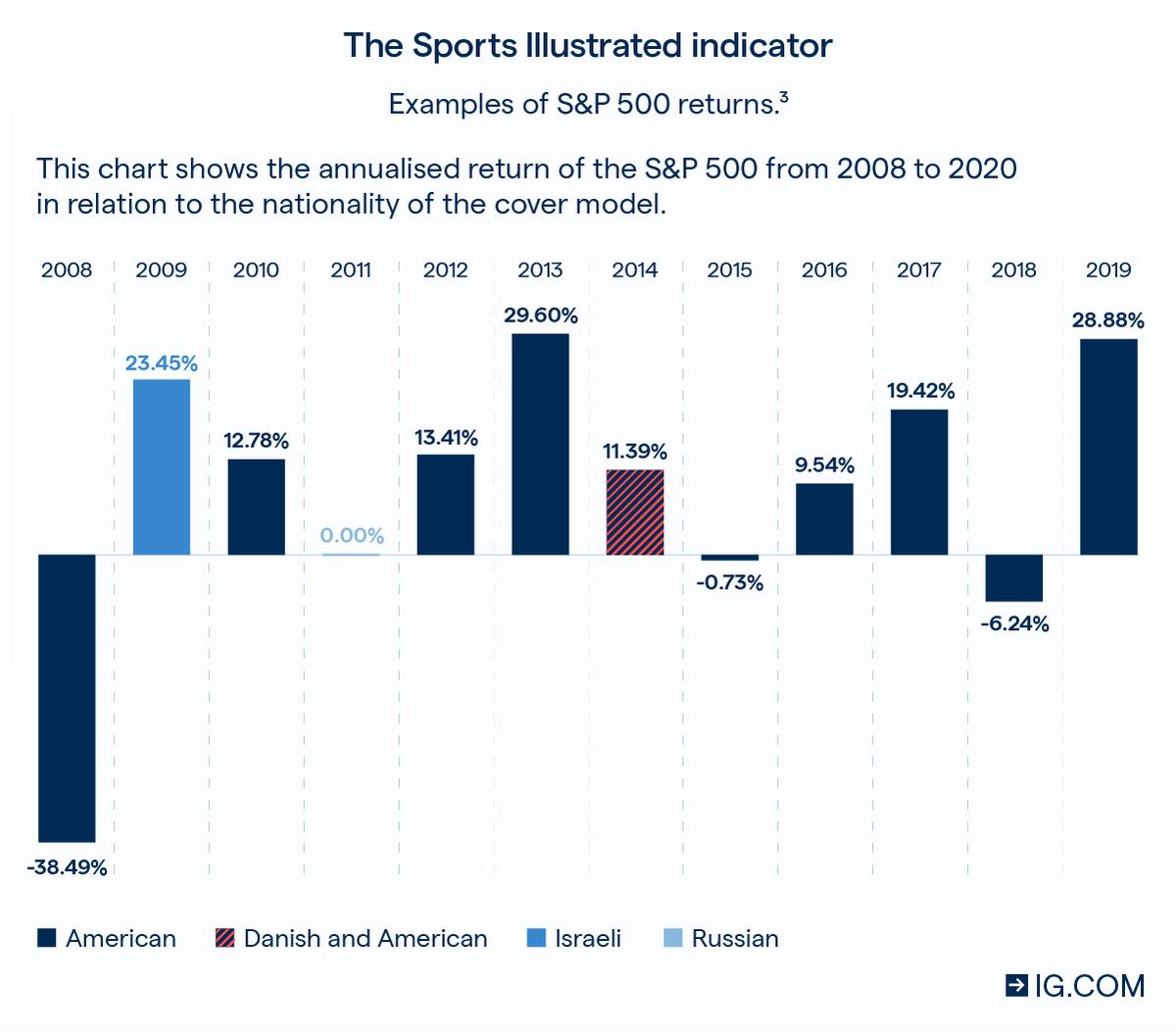 Did Japanese whisky prices in 2019 warn us about the 2020 US recession? Well, they may have. The theory stems from the belief that when high-end products become even more expensive, the business cycle for that product is peaking. And, when that happens, markets may be in for a bumpy ride.

Remember, this indicator is based on a random correlation and has not been proven. 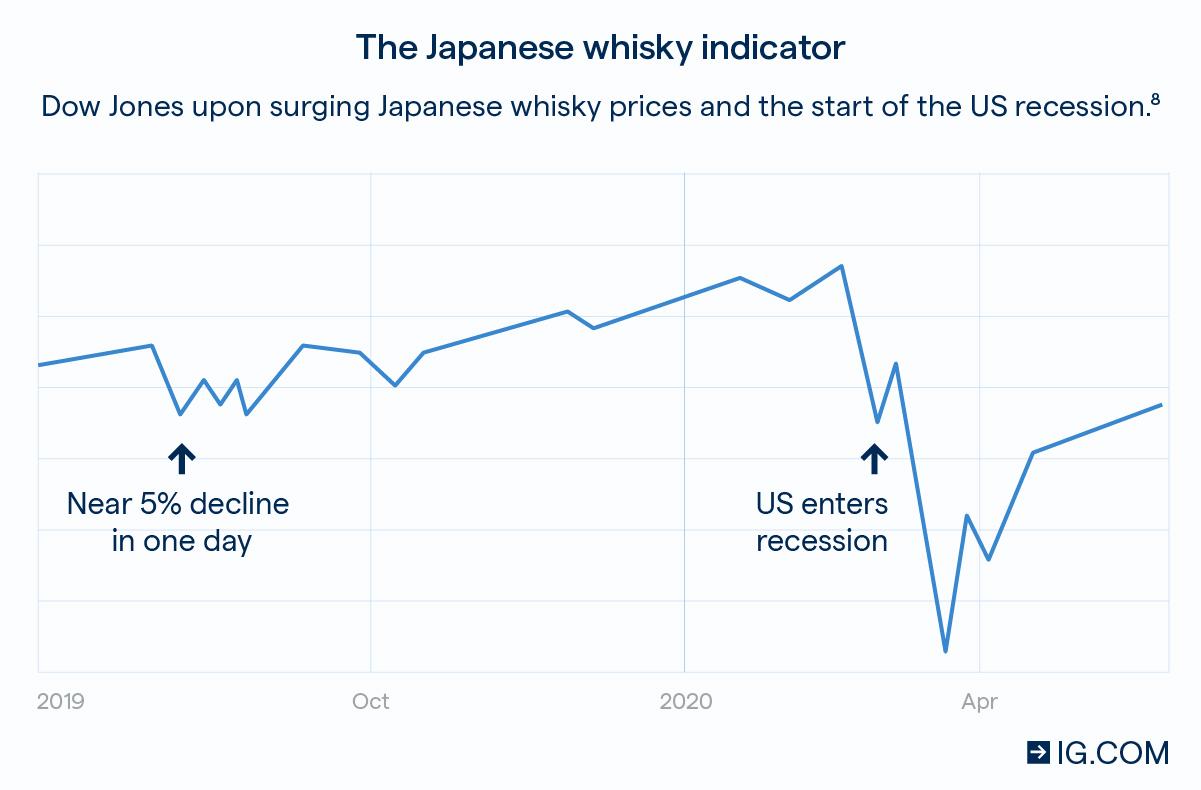 It’s important to know that you probably should not use the unusual indicators listed here to inform your trading or investment decisions. There are a few steps to take if you want to predict market movements more accurately. The first step is to research the market and make sure you understand what causes price fluctuations.

For example, if you want to trade the S&P 500, it’s important to know how indices work and learn more about the sectors represented in the index. Once you’ve done this, you should do thorough technical analysis and take the appropriate fundamental factors into account. Only then could you consider if there is any correlation between one of the unusual economic indicators and the market you’re trading.

Remember that you also need a good trading plan, which will outline exactly what your aims are, how much capital you have at your disposal and what your appetite for risk is.

Making a prediction about market recovery in any situation can be challenging, as there are many variables to consider. However, you can look at historical events and identify the statistical likelihood of the a market rebounding within a certain amount of time.

You can use IG’s charts and technical indicators to help you identify recognisable patterns within financial markets. Remember that market fluctuations can happen completely unexpectedly, which is why your trading plan is so important.

How to use traditional economic indicators