In line with its own sustainability efforts, Strategic Marine revealed its offshore support vessels of the future at Offshore Southeast Asia (OSEA) 2022 in Marina Bay Sands.

Considering the recent United Nations Climate Change Conference (COP27), which focused on the future of energy, the new generation of vessels must also reduce emissions and carbon footprint. Mr Chan stressed the importance of reducing the carbon footprint during the asset’s operating life as well as during construction.

Commenting on the designs of these vessels during a presentation at the Knowledge Sharing Theatre in OSEA, he shared: “We aim to reduce operating costs, impact on the environment, as well as improve operational flexibility and safety.”

Technology and ship design are two ways Strategic Marine incorporates sustainability into shipbuilding. The Generation 4 FCB and StratCat 27 CTV, for example, have improved hull forms that improve engine efficiency or reduce emissions. Aside from this, the StratCat 27 has environmentally friendly features such as a green passport for recyclability and is coated with an anti-fouling paint that is silicon-based, which far from compromising the speed of its hybrid engine, helps the vessel to achieve half a knot increase in speed instead. Currently, a pair of hybrid StratCat 27s are under construction and their delivery in 1Q2023 will position Strategic Marine to be the first shipyard in Asia to introduce Hybrid CTVs. 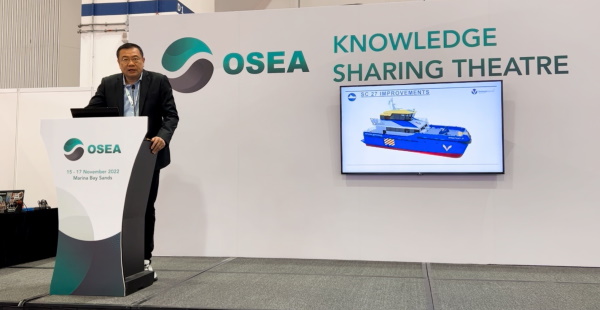 A vessel type dedicated to crew transportation, FCTV, has also been presented by Strategic Marine to operators seeking lower operating costs than helicopters. The FCTV is a catamaran powered by waterjets and compared to helicopters, it consumes significantly less fuel.

OSEA, the largest offshore energy event in Asia, runs from 15 to 17 November. Strategic Marine is one of the exhibitors at this event, and has a booth located at BC3-01.
Source: Strategic Marine

2022-11-18
hellenicshippingnews...
Previous: VTTI and UAB-Online expand international collaboration to ATB terminal in Malaysia
Next: WISTA International and the Maritime SheEO officially announce a MoU in India