Stronger gasoil export margin, and slower than expected domestic demand recovery is likely support China to increase outflow of the barrel to over 1 million mt (240,000 b/d) in August, which can be a one-year high, refinery sources with knowledge about the matter and analysts said on Aug. 4.

At the same time, Chinese refineries are likely to cut gasoline exports to as low as 400,000 mt this month from an average of about 930,000 mt in the first half of the year, while jet fuel outflows as the usual levels of below 1 million mt as to optimize usage of the precious oil product export quotas, the sources added. 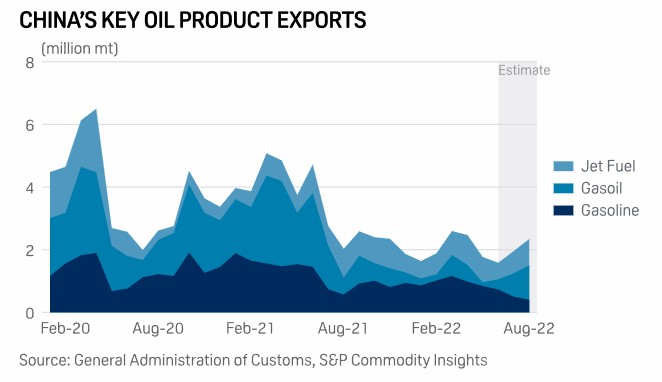 Some refineries, led by those in northeast China, told S&P Global Commodity Insights that they have lifted gasoil exports for August and cut gasoline outflow.

Norinco’s Huajin Chemical in the same region, the northeastern China, also resumed gasoil exports with newly gain 100,000 mt quota to send out 80,000 mt of gasoil in August, a source with knowledge of the matter said and added price of the barrel in Asia market is about Yuan 1,500/mt ($29.8/b) higher than that in domestic market.

“Wise to use limited quotas to increase gasoil exports as its margin is stronger than others. And better to export now rather than later because product cracks are narrowing recently,” a Beijing-based analyst said adding that gasoil’s exporting margin for Chinese firms is likely at $25-$30/b, wider than the above $10/b for gasoline.

The Platts FOB Singapore 10 ppm sulfur gasoil cargo crack against front-month cash Dubai has averaged $35.27/b in August through till Aug. 3, diving 16.42% down from an average of $42.20/b over July, S&P Global data showed, demonstrating the recent decline in cracks of the distillate.

Meanwhile, the Platts FOB Singapore Jet/kerosene cargo crack against Dubai is averaging $25.74/b in August, plunging 18.93% from an average of $31.75/b through July, S&P Global data showed, also reflecting a downward trajectory

Beijing is keen to cut the country’s oil product outflows by issuing less export quotas to ensure enough domestic supplies and fight against global inflation in a short term while reducing emission to meet the country’s “net-zero” target in a long run.

Due to tight export quota availability, China’s gasoil exports had even fell to a seven-year low at 120,000 mt in May before the flow slightly recovered to 330,000 mt in June, according to data from General Administration of Customs. Market sources estimated gasoil outflows in July could gain further to about 600,000 -750,000 mt.

At the same time, domestic gasoil demand recovery is slower than expected with several state-owned refiners told S&P Global that they are under inventory pressure.

In addition, “gasoil demand from the construction sector is also poor due to cash flow problems, while bad PMI suggested less transportation consumption from the manufacturing sector,” a Beijing-based analyst said adding the wide lockdown in April-May caused profound and lasting impact.

Tens of thousands of people have refused to pay their mortgages for uncompleted apartments since early July, slowing down property construction in China. The country’s manufacturing sector flipped back to contraction territory with the official PMI at 49 last month from an expansion of 50.2 in June.

This suggests less policy push for an oil demand rebound. China is unlikely to hit its 5.5% GDP growth target for 2022 — Platts Analytics forecast the world’s second-largest economy to expand 3.3% in the year.

The consumer transportation fuel gasoline and jet fuel, however, have seen healthy recoveries during the ongoing summer holidays from Q2 amid an unusually hot weather, despite sporadic movement controls threaten that growth, domestic market sources and analysts said.