Stuck at sea: How to save the world’s seafarers and the supply systems they support

Clapping for essential workers on suburban streets cannot be heard at sea, where hundreds of thousands of crew members are stranded on ships they can’t leave, risking their lives to put food on our plates.

Our complex global supply system would grind to a halt without them, as merchant ships transport about 90% of global trade by volume, from food and medical goods, to energy and raw materials. In 2018, world seaborne trade volumes rose to an all-time high of 11 billion tonnes.

But as the pandemic continues, the mental health and safety of crews are under threat, imperilling the global economic recovery from COVID-19, according to a growing swell of leaders and organizations, including the World Economic Forum.

Meetings of the International Maritime Organization (IMO), the International Labour Organization (ILO), heads of business, government ministers and workers’ representatives will begin on June 22 to chart a way through the crisis. At the heart of the gathering will be a call for urgent action to rescue these forgotten essential workers, who have been working much longer than their contracts usually allow. 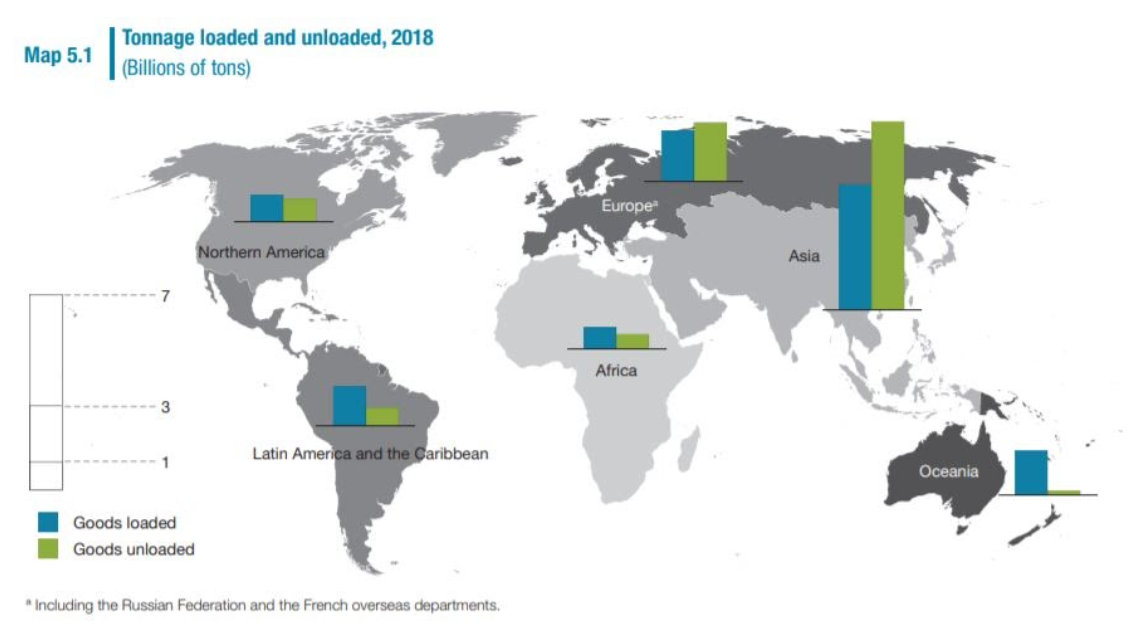 ‘Serving those who serve us’

Since the coronavirus crisis began, as many as 1 in 6 of the 1 million crew on 60,000 cargo ships at sea have been marooned. Crew changes were suspended in March as a short-term solution to avoid disruption to the supply system.

The men and women still working on board are unable to disembark, with border closures, grounded aircraft and travel restrictions all preventing them from returning to their home country and families.

And they don’t know when they will.

“The transport industry’s imperative is keeping people safe, while keeping food and other goods moving in service to society,” says Margi Van Gogh, the Forum’s Head of Supply Chain and Transport Industries, also coordinating the Industry Action Group with a cohort of CEOs.

“Cohesive action at a global level is needed to keep fatigued seafarers safe – protecting the lives and livelihoods of these men and women who keep the fragile, interconnected global supply system functioning is the best way we can now serve those who serve us,” said Van Gogh.

The plight of seafarers has become a “humanitarian and safety crisis”, said UN Secretary-General António Guterres, calling on countries to repatriate their citizens.

“All involved governments must give full effect to the recent call of the UN Secretary-General, to alleviate the hardship on these heroes of the transportation world and their families, and to avoid the possibility of disruptions in trade.”

Palle Laursen, the chief technical officer of Maersk, the world’s largest container shipping company, told CNN more than a third of the 6,600 seafarers currently at sea have been serving “well above their normal contract length”.

“Fatigue and issues with mental health are increasing. For safety, regulatory and humanitarian reasons, crew changes cannot be postponed indefinitely.”

Some seafarers have been onboard for more than a year, according to Dave Heindel, the International Transport Workers’ Federation (ITF) Seafarers’ Section Chair. Many have been prevented by governments from coming ashore even for a walk and in some cases, he says, refused emergency medical care.

In April, it took a joined-up response from the ITF, the International Labour Organization (ILO) and the International Maritime Organization’s Seafarer Crisis Action Team (tasked with monitoring, coordination and support) to save the life of a 45-year-old Russian seafarer who was having a stroke, after repeated requests from the cargo ship to enter port were refused.

One container ship officer anonymously told the BBC: “Morale is quite low, especially because you can’t go out ashore and, without that, by definition it’s cabin fever.”

“You have had to make, and are continuing to make, many sacrifices,” said Pope Francis in a recent video message of solidarity. “Long periods spent aboard ships without being able to disembark, separation from families, friends and native countries, fear of infection – all these things are a heavy burden to bear, now more than ever.”

As of mid-June, as many as 300,000 seafarers a month need international flights to enable the changeover of crews, according to IMO and the United Nations Conference on Trade and Development (UNCTAD).

Half of those have been stuck on ships, in some cases for 15 months (compared to the 11 months maximum, under the ILO’s 2006 Maritime Labour Convention). The other half are waiting to embark and, as they only earn money at sea, are struggling to feed their families.

Global maritime charity Stella Maris conducted a survey of the impact of COVID-19 on seafarers. The majority of the 363 respondents, mainly from the Philippines, said their most urgent need was to secure a new contract and return to work, while 69% said the pandemic has had a “significant financial impact on them”. They also said it had affected their emotional, mental and physical wellbeing.

Added to stranded seafarers are the 70,000 cruise ship staff waiting to be sent home and crews on commercial fishing vessels which need to be changed.

While the length of contracts vary, seafarers typically work between four and six months on ships, before a period of leave, according to the IMO. At sea, they work seven days a week, for up to 12 hours a day, on tasks that need them to stay alert.

“Thousands of seafarers stranded on board ships have already expressed their exhaustion, fatigue, anxiety and mental stress,” says the IMO. “And a physically and mentally fatigued seafarer has a much higher risk of being involved in a marine casualty.”

In March, the ILO called for seafarers to be given key or essential worker status, and to be exempted from travel restrictions during the COVID-19 pandemic.

In May, a coalition of industry associations, including the ITF, the International Chamber of Shipping (ICS) and the Federation of National Associations of Ship Brokers and Agents (FONASBA), published its 12-step protocol, advising governments on how to facilitate ship crew changes during the pandemic. It was backed by the IMO and had input from the International Air Transport Association (IATA).

Crew changes took place in 50 countries that month, according to the International Chamber of Shipping. The Netherlands, UK, Germany and Canada are among those who have waived visa restrictions, while Singapore completed its first crew change on 8 June.

But the refusal of other countries to get on board was seen as putting lives and the supply system at risk, and after months of insufficient government action, the ITF drew a line in the sand, making 16 June the date after which workers could no longer be made to extend their contracts and stay at sea.

The ITF has said “enough is enough” and is offering to help seafarers leave ships and return home, under the Maritime Labour Convention.

“Most countries that have managed to contain the virus are now easing their restrictions, with the aim to restart economies. This very much depends on the goods ships and seafarers carry, but at the same time, they are unable to implement the necessary measures to facilitate crew changes.”

But if the crew disembark with no replacements, it also puts businesses at risk, notes Van Gogh: “Those vessels can’t sail and the entire supply system grinds to a halt in different trade routes. So we need a negotiated, well-brokered crew exchange solution.”

Resolving the logjam requires a coordinated global response to tackle the twin challenges of ensuring workers are treated with the respect they deserve, while ensuring the supply system operates smoothly to drive the economic recovery from COVID-19.

As Van Gogh says: “This is the moment to take a hard look at whether we really do uphold human rights throughout global supply chains and can move forward together to achieve the Davos Manifesto’s principles of stakeholder capitalism.”

On 25 June, the International Maritime Organization (IMO) will be marking the Day of the Seafarer by calling on all countries to officially designate seafarers as “key workers” and ensure crew changeovers can take place safely.

“It’s an immediate response. We’re not talking about opening countries up to travel and tourism, we’re talking about a specific, easily identifiable group of people, who’ve made an immeasurable contribution to making this [pandemic] as bearable as it can be. And they’ve got to recognize this,” says Jonathan Williams, General Manager at the Federation of National Associations of Ship Brokers and Agents.

The airline industry is already on board to help get workers home, with talk of transport corridors and designated airports. IATA’s Director General and CEO Alexandre de Juniac says: “If governments identify airports that seafarers can use for crew changes and make appropriate adjustments to current health and immigration protocols, airlines can help keep global logistics moving.”

When shipping industry leaders come together in Geneva next week, they will urge governments to act quickly to waive visas for seafarers and arrange flights to get them home before the crisis deepens. The ITF has a seven-point list of requirements.

“The global community has to act responsibly as the seafarers and the industry have demonstrated throughout the crisis,” says the ITF’s Steve Cotton.

Other leaders have also called for swift action.

“We cannot take these heroes of global trade for granted anymore. Seafarers do not represent a risk; their job keeps them in quarantine and socially distant,” says the Secretary General of the ICS, Guy Platten.

“Government leaders must cut through the bureaucracy, lift the continuing imposition of travel restrictions on these key workers and focus on this issue now. The solutions do not need money; they do not need complicated negotiations, this is simple.”

“Taking care of the people who move our goods and enable trade leads to job creation. This is central to securing lives and livelihoods,” says Van Gogh. “Cohesive global leadership from public, private and civil society leaders is necessary to solve this deepening crisis. Cohesive leadership is also vital for the ‘Great Reset’, enabling us to build back better – a sustainable global supply system is at the heart of this.”
Source: World Economic Forum