The Suez Canal remains blocked by the Ever Given cargo vessel for a sixth consecutive day, with more than 320 ships — including crude, product and chemical tankers, dry bulk carriers and container vessels — waiting to transit the canal from both sides as of March 28, according to data from S&P Global Platts’ ship tracking and trade-flow service cFlow.

By 1200 GMT, there were at least 28 crude tankers estimated to be carrying around 26 million barrels and 24 product and chemical tankers holding around 1 million mt waiting to navigate through the canal, according to cFlow. Some ships have started to divert from their original trade routes and head the long way around the Cape of Good Hope.

The rerouting to the cape could add as many as 20 days to a voyage from the Middle East Gulf to Rotterdam that would normally go via Suez.

Another two tugs will be added to the 11 tugs already trying to free the Ever Given, the ship’s technical manager Bernhard Schulte Shipmanagement (BSM) said March 27.

“11 tugs have been working throughout the day alongside the ongoing dredging operations which continue to remove sand and mud from around the port side of the vessel’s bow,” BSM said in a statement.

Shipping and offshore agency Leth Agencies, which has operations at the canal, said Suez Canal Authority was planning another re-floating attempt on March 28 around 1600 local time (1400GMT). 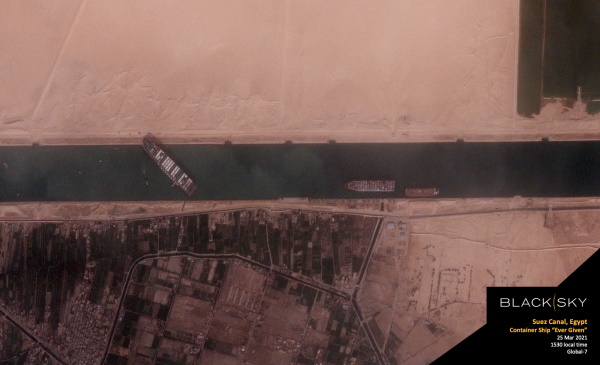 It appears the Ever Given became stuck due to strong wind. The ship is under a time charter agreement with Taiwan’s Evergreen Marine.

“At the time of the incident the Ever Given was transiting northbound through the canal en route to Rotterdam, Netherlands with two canal pilots onboard,” BSM said. “Initial investigations suggest the vessel grounded due to strong wind. Once re-floated, the vessel will undergo a full inspection and BSM will cooperate fully with the authorities in any investigations.”

Shipping giant Maersk said in a statement it expects it will take three to six days to clear up the backlog of vessels accumulated up until March 27, should convoys run continuously after the canal is unblocked. Maersk said it and its partners had 27 vessels waiting to enter the canal on March 28, with two more expected to reach the blockage by the end of the day. It has redirected 15 vessels around the Cape of Good Hope, which will add sailing time equal to the current delay of sailing to Suez and waiting, it said.

Royal Boskalis Westminster, a Dutch dredging and heavy lift company, has been hired to help refloat the giant Ever Given container.

Trade for crude oil, refined products, LNG, steel has already been hit, with some discharge and loading delays already caused and these could worsen if the blockage persists longer.

The Suez Canal has a daily capacity of approximately 50 – 85 vessels, with vessels entering from both sides. The Suez Canal transported 5 million b/d of crude and oil products and 31 million mt of LNG in 2019 – before trade was impacted by the pandemic — according to Platts Analytics and data from the Suez Canal Authority.
Source: Platts