Suezmax Tanker Owners Can Find Hope for 2019, Unlike their VLCC Counterparts

As the tanker sector is still trying to recover part of the lost ground of the past couple of years in terms of earnings, shipbroker Charles R. Weber, in a recent research analysis, noted that supply fundamentals are bound to improve in the near future, at least for some segments, since VLCCs are about to post their biggest fleet growth since the ’80s, not leaving much room for hope.

According to the shipbroker, “Suezmax demand surged 12% y/y during the first nine months of 2018, easing the extent of an epic disjointing of fundamentals created by 7% decrease in demand between 2015 and 2017 coinciding with a 17% net fleet expansion.  The improvement has already been well reflected in spot market earnings the class has observed: spot market earnings surged from a record quarterly low of ~$5,563/day during 1Q18 to ~$15,464/day during September and over $23,000/day today. Despite the improvement, total demand during 3Q18 remained just shy of the previous record set during 1Q15 – with the earnings improvement of late underscoring the importance of diversity when it comes to the geographic distribution of trades.   Indeed, diversifying both the geography of both loading and discharging points reduces the class’ overall efficiency and stimulates competition for units between loading regions”.

CR Weber said that “at the start of the decade, the West Africa and Black Sea markets collectively accounted for 55% of the Suezmax loading profile.  Declining trans‐Atlantic crude exports from West Africa and growing trades from the region to Asia have allowed VLCCs to cannibalize Suezmax demand there. Suezmax demand gains in the Black Sea market, meanwhile, have been modest. During the first nine‐ months of 2018, the two regions collectively accounted for just 35% of total‐ Suezmax demand”. 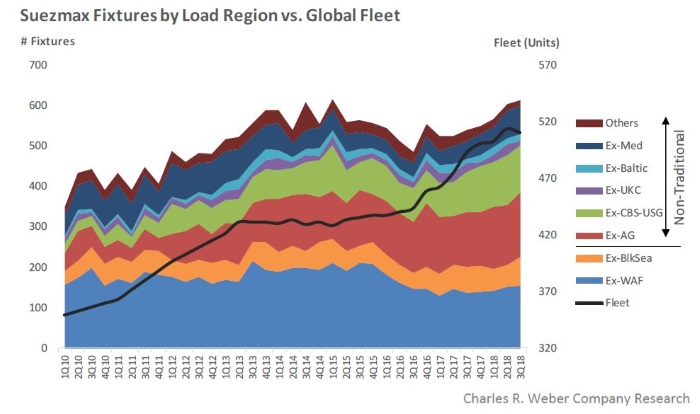 The shipbroker says that the diversification of Suezmax trades can be viewed as having occurred in two stages. Ironically, neither stage was expected when their respective preceding newbuilding ordering sprees were penned. In the first stage, “Suezmax supply growth, already high from the boom of the 2000s, accelerated further as owners identified the class as the most stable and extolled the virtues of taking advantage of that fact and seemingly attractive newbuilding prices (compared with the pre‐crisis highs of the mid/late 2000s).   These units began delivering just as trans‐Atlantic West African crude volumes commenced a structural decline due on rising domestic US crude production and a round of refining capacity rationalization on the US east coast.     Meanwhile, a lack of interest in Aframax newbuidlings as the Suezmax fleet was being over‐ordered created disparities between the two classes that opened up the larger class to markets traditionally serviced by the smaller Aframaxes.    Thereby, owners alleviated Suezmax woes sufficiently that the class was not excluded from the earnings rally of 2015”.

In Stage 2, “having failed to create oversupply levels akin to the 1970s and 1980s and clearly not content with that fact, owners embarked on yet another newbuilding spree.   These units started delivering in earnest in 3Q16  ‐‐ following four consecutive quarters of declining demand.    Meanwhile, the demand growth rates in traditionally Aframax markets, petered out.   As this follow‐on round on newbuilding deliveries wore on and created the worst fundamentals setup witnessed in decades, earnings continued to erode and between 3Q16 and 3Q18, spot Suezmax earnings averaged below OPEX, at just ~$9,528/day. The poor performance of this period belies though an impressive improvement in demand trends, which only recently reached levels sufficient to support earnings in a meaningful and substantial way.  The new demand gains are almost exclusively in the Atlantic Americas and the Middle East.  In the former, crude exportsfrom the US have maintained the directional growth of regional demand, offsetting softer intraregional demand from freight rate differentials that disfavored Suezmax tonnage for Aframax trades.  With US crude exportsserviced by the class being long‐haul, associated ton‐mile gains were substantial.   Meanwhile, in the Middle East, demand has been stronger due to both Suezmax suitability for certain trades (like Basra Heavy cargoes and India‐bound voyages) and low freight rates being offered by the slew of newbuilding units not absorbed by East‐West clean trades on maiden voyages seeking cargoes from the region”, CR Weber noted.

Meanwhile, regarding the 2019 estimates of the tanker market, “the million‐dollar question at the moment is whether the rebound in earnings being observed now is reflective of the supply/demand equation having passed an inflection point.  In the affirmative, this would imply that earnings are set for directional gains through the coming quarters. The answer isfar from clear‐cut, however, and though 4Q18 appears set for earnings at least at two‐year highs, much uncertainty surrounds the view for 2019. On the supply side, fleet growth has moderated.  After posting net growth rates of 5.7% and 8.4% during 2016 and 2017, respectively, 2018 is projected to conclude at 2.0%, followed by 2.9% during 2019.    While the moderation is a positive development and allows demand to catch up, any further fleet growth in the near‐term is unconstructive.    Also, even as Suezmax fleet growth is moderating, VLCC fleet growth is projected at 7.7% for 2019 (the loftiest annual growth rate for the class in 43 years), which risks derailing the fragile recovery that class is observing, with trickledown effect on Suezmax earnings”, the shipbroker said. 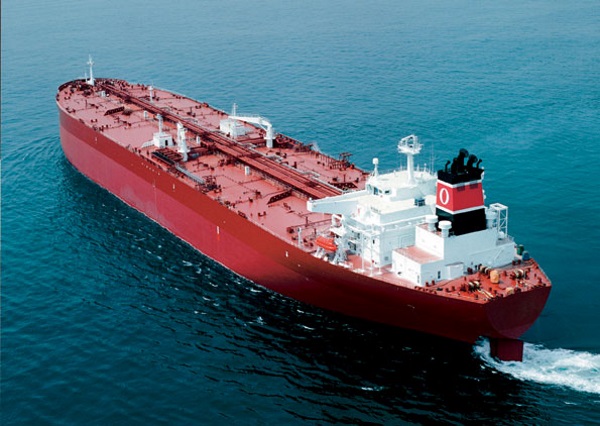 Finally, according to CR Weber, “on the demand side, growing US crude exports remains a key prospect.  The EIA projects that US crude production will accelerate by 1.2 Mb/d to 12.2 Mnb/d by 4Q19 from 3Q18.  Meanwhile, over the same space of time, domestic refinery inputs are expected to grow by just 0.1 Mnb/d.  Factoring for regional production and refining disconnects and other items, the implied growth in exports could be ~745,000 b/d.   If Suezmaxes retain the 30% share of US crude exports thereof that they have enjoyed over the past ten months, and assuming demand elsewhere is unchanged, Suezmax demand growth could clock in as high as 5.9% y/y during 2019.  A larger share of West African exports being absorbed by VLCCs amid Iran sanctions could offset much of that, however.  Moreover, the runway to US crude production at 12.2 Mb/d is likely to be bumpy with periodic highs and lows. By the close of 2019, however, we expect that Suezmaxes will be included in concerted rallying of crude tanker earnings as global refiners boost uptakes to produce IMO 2020‐compliant bunker fuels.  The extent of this, too, is increasingly tenuous, however, as scrubber adoptions is already surprising to the high side—particularly among the most bunker‐intensive maritime segments”, it concluded.
Nikos Roussanoglou, Hellenic Shipping News Worldwide