In the July STEO, EIA revised its forecast for 2019 Henry Hub natural gas prices down from the June STEO following three consecutive months of price declines. Prices in June averaged $2.40/MMBtu and have declined by 19% since March. 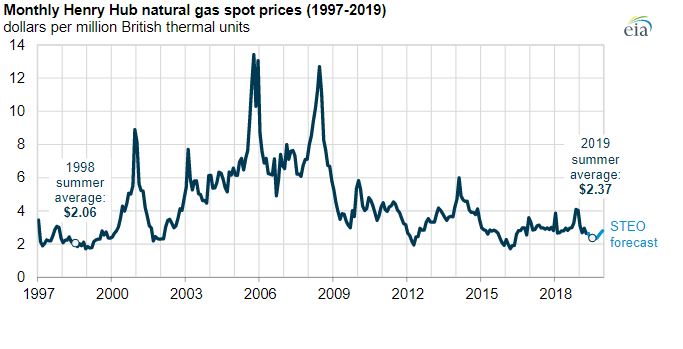 Spot prices at key trading hubs across the country have traded close to the Henry Hub basis. Prices at the Transcontinental Pipeline Zone 6 trading point for New York City and the Chicago Citygate were both at $2.12/MMBtu, the lowest June average price and a decrease of 25% and 23%, respectively, from June 2018. The PG&E Citygate near San Francisco had the highest June average price at $2.59/MMBtu, a 14% decrease from last June. 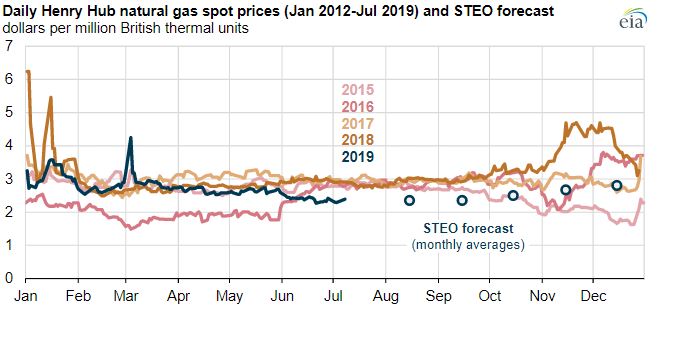 The recent natural gas price declines reflect relatively mild weather for the start of summer that led to lower than expected natural gas-fired electricity generation, which allowed natural gas inventory injections to outpace the previous five-year average rate. Between April and June, cumulative net injections into underground storage fields have exceeded the five-year average by 41%, reducing the current five-year average deficit by more than 300 billion cubic feet (Bcf). In addition to the recent price declines, the lower price forecast reflects EIA’s updated assessment of U.S. drilling activity and average well productivity, both of which are higher than previously assumed.

However, if summer temperatures are warmer than expected, electricity consumption, natural gas-fired electricity generation, and, ultimately, natural gas prices could be higher than forecast.

EIA expects that as supply growth begins to moderate in late 2019 and in 2020, natural gas prices will likely increase. EIA forecasts that Henry Hub natural gas spot prices will average $2.50/MMBtu in the second half of 2019 and $2.77/MMBtu in 2020.
Source: EIA