Summer U.S. natural gas prices are the highest since 2014

In June, the U.S. natural gas spot price at the Henry Hub averaged $3.26 per million British thermal units (MMBtu), the highest price during any summer month (April–September) since 2014. Prices in July have increased from June, averaging $3.67/MMBtu through the first two weeks of July. Spot prices for July 14 in every one of the more than 175 pricing hubs tracked by Natural Gas Intelligence exceeded $3.00/MMBtu. These hubs include supply hubs that have traditionally traded at notable discounts to the Henry Hub, such as the Eastern Gas South hub (formerly known as Dominion South), located near production activities in the Appalachia Basin, and the Waha hub, located near production activities in the Permian Basin. 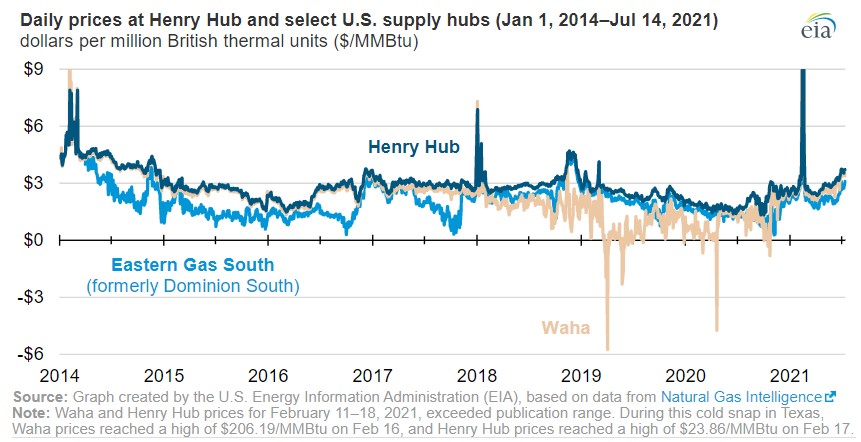 Tighter U.S. natural gas supply and demand balances in recent months contributed to price increases. This summer, more natural gas exports—both those sent by pipeline and those sent as liquefied natural gas—have reduced the supply available for domestic consumption. Warm weather this summer has also increased natural gas consumption for electric power. According to the National Oceanic and Atmospheric Administration (NOAA), June 2021 was the hottest June on record for the United States. Drought conditions in the western United States, in particular, have contributed to increased natural gas-fired generation to offset decreased hydroelectric generation. According to our Hourly Electric Grid Monitor, natural gas-fired generation in the Northwest averaged 240 gigawatthours (GWh) in June 2021, an increase of 50% compared with last year. During the same period, hydroelectric generation fell 20% to 410 GWh.

Less natural gas has been injected into working storage in the United States than average this summer, exerting further upward pressure on prices. According to our latest Weekly Natural Gas Storage Report, working natural gas in storage began the injection season (April 1–October 31) at 1,784 billion cubic feet (Bcf), only 24 Bcf less than the five-year average. U.S. working natural gas inventories are now at 2,629 Bcf, 189 Bcf below the five-year average and 543 Bcf below last year’s inventories at this time.

According to our latest Short-Term Energy Outlook, we expect that tight U.S. natural gas market balances will continue through the rest of 2021. We forecast the spot price at the Henry Hub will average above $3.00/MMBtu through March 2022 and will average $2.96/MMBtu in the second half of 2022.
Source: EIA