Djibouti is the latest country to benefit from a national training workshop* (held 2-5 August, 2021) on implementation and enforcement of the International Convention for the Prevention of Pollution from Ships (MARPOL). The workshop particularly emphasized the importance of MARPOL Annexe V, which focuses on prevention of pollution by garbage from ships and prohibits disposal of plastics and restricts disposal of other ship-generated solid wastes at sea.

The workshop, held in Djibouti City and delivered in French, also underscored the importance of ratification of Annex VI regulations to prevent air pollution from ships. Full and effective ratification and implementation of the convention could help improve the air quality in and around the Gulf of Aden and the Red Sea. 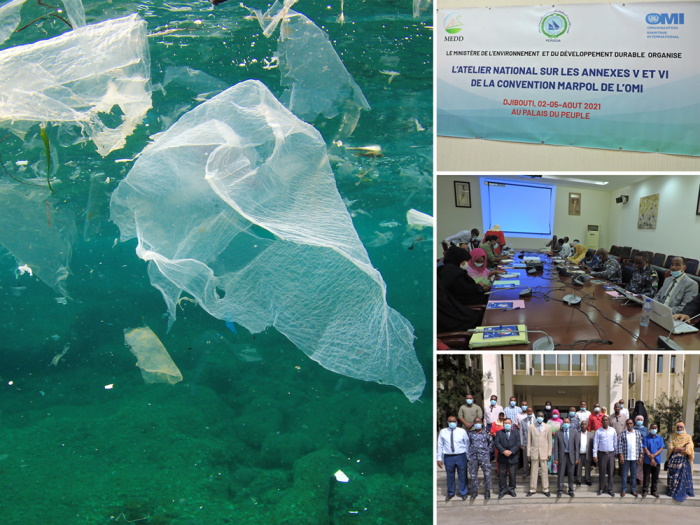 An IMO representative from the Marine Environment Division gave a presentation on implementation of MARPOL Annex VI and recent developments within the IMO. A representative from The Regional Organization for the Conservation of the Environment of the Red Sea & Gulf of Aden (PERSGA) updated participants on ongoing efforts to designate the Red Sea and Gulf of Aden as a Special Area under MARPOL Annex I and Annex V.

Officials responsible for the prevention and control of pollution from ships were trained on the management and operations of ship-generated waste reception facilities at Djiboutian ports as well as given information about port reception facilities around the world under the Global Integrated Shipping Information System (GISIS). In addition to encouraging Port State Control to implement and enforce MARPOL more consistently, the workshop worked to improve the overall knowledge of participants about the MARPOL Convention and its current requirements as well as recent developments.

Participants had an active discussion about factors affecting full implementation of MARPOL, including incomplete transposition of the convention and its amendments into national legislation. Recommendations to address the existing barriers and the need for activating the “Special Areas” status of the Red Sea and Gulf of Aden were also on the agenda.
Source: International Maritime Organization (IMO)