India’s sustained uptrend in oil consumption came to a halt and slipped into the red in April from March levels as rising domestic retail fuel prices on the back of surging crude took a toll on gasoline, diesel and LPG demand, but analysts said the trend could get reversed in May.

They noted that despite the month-on-month slowdown in oil products consumption in April, year-on-year demand posted solid growth and fundamentals for sustained demand revival were intact, with India expected to post robust year-on-year demand growth for the whole of 2022.

“Middle distillates will account for more than half of 2022 growth, partly due to a slow recovery last year. But there are still risks of downward adjustments as the Russian-Ukraine conflict continues to evolve and the worry of a global or regional economic recession has been growing,” said Lim Jit Yang, advisor for oil markets at S&P Global Commodity Insights.

Domestic oil products demand fell 4% month on month to 18.64 million mt, or 4.9 million b/d, in April, data from the Petroleum Planning and Analysis Cell showed. The rise in crude prices due to the Ukraine-Russia conflict pushed up domestic prices of transportation fuels and other oil products in India.

“Diesel sales, which broadly mirror the strength of an economy given its primary use in transportation and industry, saw monthly volumes in April drop as high prices bit into the price-sensitive transport sector. Diesel prices on an average across the country were up nearly 4% over March,” he added. 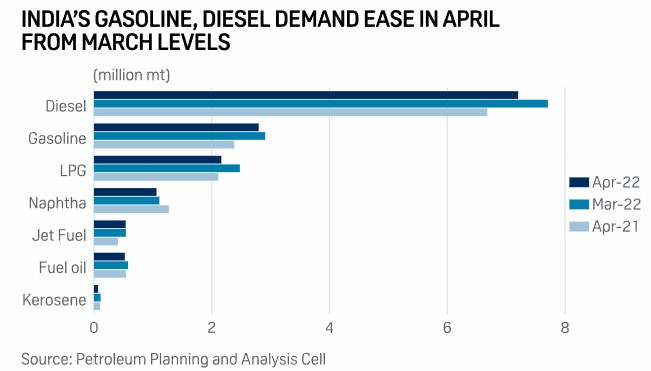 Over January-April, demand for oil products rose 4.7% year on year to 73.25 million mt, or 4.8 million b/d, as economic activity improved after the country’s third wave of COVID-19.

Demand for diesel and gasoline rose 1.9% and 5.1% in January-April, respectively, while the demand for naphtha fell 6.6% year on year. Demand for jet fuel and LPG also rose in the four-month period by 12.3% and 5.4%, respectively.

Analysts said oil products demand in May is expected to be higher because of initial signs of demand rebounding.

“May also marks the start of the harvesting season, which traditionally sees a demand spurt from the agriculture sector,” Kapoor said.

“Preliminary sales reports show that petrol grew 14% and diesel sales by 2% during the first half of May when compared with the same period in the preceding month as prices settled and with the summer season setting in, more and more Indians are taking to the road as travel and tourism pick up pace,” he added.

Air travel, and by extension aviation fuel usage, has been one of the biggest casualties of pandemic-induced restrictions. Demand has since picked up but with airlines yet to resume full-scale operations as some global travel restrictions are still in place.
“Aviation turbine fuel sales recorded a whopping 85% increase in the first half of May from the same period a month earlier, mirroring a sharp uptick in air travel,” Kapoor added.

According to Platts Analytics by S&P Global Commodity Insights, India’s oil demand is expected to grow by 245,000 b/d year on year in 2022, revised up by about 20,000 b/d from an earlier outlook, due to better-than-expected demand trends. But year-on-year oil demand growth could ease to 195,000 b/d in 2023.

Gasoil demand is set to improve as manufacturing activity regains momentum, while jet fuel use will also improve as international flights start to pick up, though they are likely to remain well below capacity, Platts Analytics added.
Source: Platts