Tall Order For Us Shale To Beat 2017 Returns

The return on investment from oil and gas wells in the most popular shale hotspot in the Permian Delaware basin peaked in 2017, according to a new study by Rystad Energy.

To better understand the profitability of modern shale wells across the most prospective US liquid basin, Rystad Energy has analyzed the historical well vintages in the Wolfcamp A zone in the Delaware basin from 2014 to 2018.

At first glance, these Delaware wells seem like a sure bet for investors, providing over 20% net return on average*. However, the corporate-level financials don’t tell investors the whole story, which is why Rystad Energy has begun analyzing wells by their “vintage” – an aggregate sum of the wells that were brought into production in a single year. 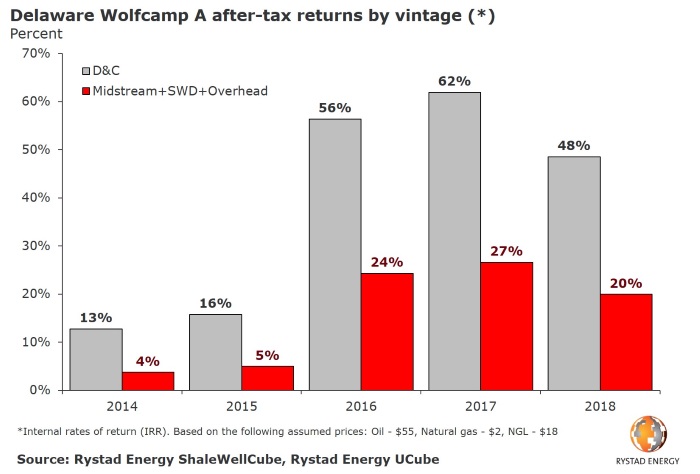 “It will be a tall order for Wolfcamp operators to beat their 2017 after-tax well results. The 2017 vintage was arguably the best in the history of the Delaware Wolfcamp A play, and it also got a boost by higher oil prices in 2018,” says Artem Abramov, head of shale research at Rystad Energy. “In turn, the vintage from 2018 faced both modest service cost inflation and a decline in oil prices throughout the fourth quarter of 2018, which resulted in a degradation of after-tax returns*. Nevertheless they remained at a level of 20% and above, with overhead costs included.”

While the vintages from 2014 and 2015 have already recovered a major part of their lifetime present value and cash flows, this is not yet the case for more recent vintages. Our analysis shows that the after-tax return for the 2018 vintage has a higher sensitivity to oil and gas prices, especially since the wells drilled in 2018 have been producing for less than 12 months.

“Last year’s vintage still has a chance to deliver higher after-tax returns than the 2016 vintage. This would require an oil price of $75 per barrel, or alternatively an oil price of $65 per barrel along with a gas price of $3 per million British thermal units. Conversely, if the oil price collapses to $35 per barrel, the vintage will not deliver even 10% after-tax return in the considered gas price range,” Abramov added. The odds of the 2018 vintage outperforming the vintage from 2017 are considerably lower, he noted, as that would require the oil price to climb to $80 per barrel.

While the economics of recent vintages in the most prospective US liquid basin remain exceptionally robust, Rystad Energy notes that these returns still do not correspond to fully-burdened returns. For a complete picture, we also need to take into account land cost, where the variability between early and late entrants is expected to be significant.