Delivered tonnage of crude oil tankers have grown by +37%, whereas total fleet demolitions for 2019 have slumped to the lowest in a decade with a reduction of 52% from the year before.

Newbuilding orders have remained low through the year with contracted tonnage down by 48%.

Amidst a market filled with uncertainty and geopolitical unrest, BIMCO maintains its bearings and turns to the market fundamentals to cut through the mist of market speculation and uncertainty-driven hype. Shipping is fundamentally about the balance between the supply of ships and the demand of markets and delivery and demolition numbers indicate fundamental oversupply in the coming years.

“Through the first nine months of 2019, delivery activity has picked up substantially from last year, particularly in the crude oil tanker segment where deliveries are up 37% year-on-year. In the same period, there has been a 52% reduction in demolitions. When combining the two, the issue of troubling overcapacity is once again looming on the horizon,” says BIMCO’s Chief shipping analyst, Peter Sand. 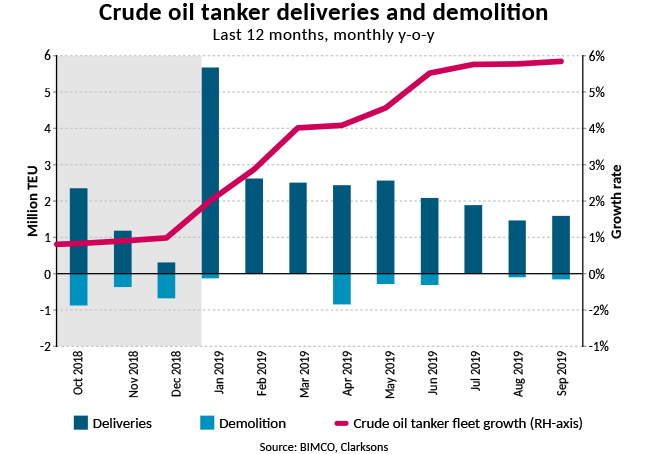 Crude oil tanker deliveries up by 37%

Deliveries have soared in the crude oil tanker fleet. During the first nine months of the year, 23 million (m) deadweight tonnes (DWT) has been delivered, which is an increase of 37% in tonnage delivered year-on-year (y-o-y). Total tonnage of dry bulk deliveries has increased 28% y-o-y to a total of 29m DWT.

Many shipowners opt for delivery in January, in order to nominally decrease the birth age of the ships, which partly explained the many deliveries in January 2019, where 12 Very Large Crude Carriers (VLCC) with a total of 3.7m DWT were delivered.

“In total, 53 VLCCs, adding up to 16m DWT, have been delivered through the first nine months of 2019. Alongside a slump in demolition activity, the total crude oil tanker fleet has grown at a staggering rate of 5.4% from January to September,” says Peter Sand.

“From a purely analytical perspective, a healthy amount of tonnage, dependent upon deliveries, has to be scrapped each year to maintain a fundamental balance between supply and demand.”

“In the first nine months of 2019, we have seen the lowest amount of tonnage being demolished in more than a decade, which sets the industry on a worrisome course towards even greater imbalance of supply and demand,” Peter Sand comments. 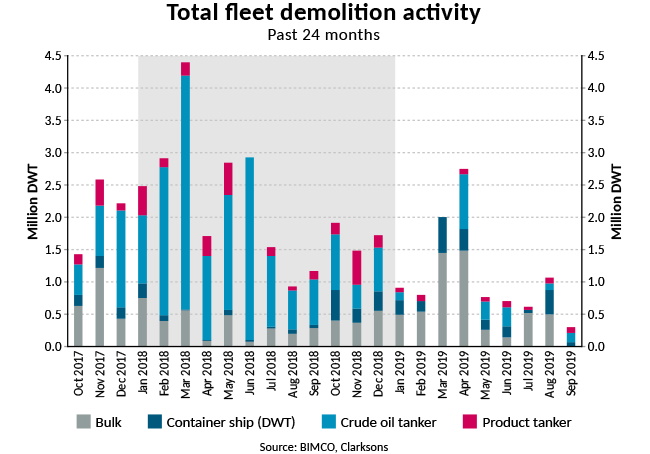 Demolition activity grinded to an almost complete halt in September with only 300,000 DWT sent to the scrapyards.

In the fourth quarter of 2019, the commercial shipping markets have seen freight rates shooting through the roof, particularly within the crude oil tanker segment and to some extent, also within dry bulk shipping. Recent attacks on the Saudi Arabian Abqaiq oil installations and the tightening of US sanctions on Iran have caused average VLCC freight rates to reach to 307,888 USD per day on 11 October 2019. The freight rates have since declined, but remain very high.

The more profitable rates in some segments and opportunistic thinking in the lead-up to IMO 2020 are keeping more ships afloat for the time being.

“While many shipowners are profiting in the short-term from market uncertainty, the medium-term outlook is contrastingly gloomy when focusing on the supply and demand fundamentals. Profitable freight rates in the mid-term future will certainly be impeded if ships, that were otherwise headed for scrapping, are kept in the fleet.”

If the past five years are anything to go by, the market should not anticipate a spectacular pick-up in demolitions during the remainder of 2019, as demolition activity is usually higher in the first half of the year.

Activity on the contracting side remained subdued throughout 2019 with all segments posting decreases compared to last year. Overall, contracting activity is down by 48% compared to the first nine months of last year, when measured in tonnage.

However, this should be viewed in the light of the heavy contracting activity in 2017-18, that will surely affect the markets in years to come.

“I think, shipowners might refrain from undertaking more newbuilding contracts as a result of the upcoming IMO 2020 Sulphur Cap, which is already a capital-intensive affair with regards to fleet retrofitting of SOX-scrubbers and higher expected bunker costs for owners opting for compliant fuels,” says Peter Sand. 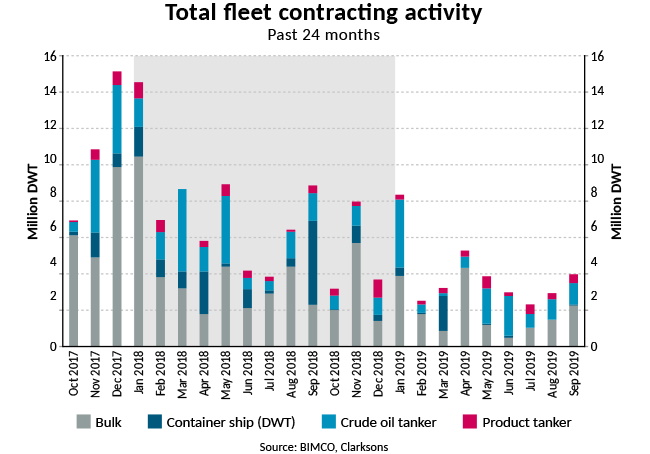 Focus on what matters

BIMCO has continuously underlined the irrelevance of the fleet-to-orderbook ratio, which is becoming increasingly outdated. A decade back, the ratio may have been relevant when the fleet and orderbook were of a comparable size. Instead, focus should nowadays be oriented towards the fleet development, carefully taking account of deliveries and demolitions.

With the IMO 2020 Sulphur cap (IMO2020) less than 77 days away, the commercial markets of the shipping industry are facing relatively high fleet growth, which may trouble the industry’s hopes of passing on the increased fuel bill.

Trade wars, protectionism and slowing global growth are factors that will negatively affect the seaborne demand growth in the upcoming years.

BIMCO urges owners to remain collectively committed in ensuring the balance of market fundamentals and not get lost in market hype and speculation.
Source: Peter Sand, Chief Shipping Analyst, BIMCO

Previous: Aframax: Demand & Supply Trends
Next: Ship Financing Down to Its Lowest Level Since 2008 as Banks Continue to Exit the Sector