The tanker market is the current “pariah” of the shipping industry, in terms of the rates it endured during the first half of the year. In its latest weekly report, shipbroker Gibson said that “the first half of last year may have seen extreme fluctuations as a result of Covid-19 and the oil price war, with the past six months being rather unassuming in comparison. Nonetheless, 1H2021 witnessed rates and earnings on some trades at lows not seen over the past twenty years. This extreme weakness has certainly given the tanker market some hope to be optimistic that the worst is now behind us. The industry is now much better positioned than at the start of the year, given the successful rollout of vaccines across the developed world and the demand recovery that accompanied it, although rates still remain abysmal”.

According to Gibson, “in terms of consumption, in June the IEA estimated that 2021 oil demand will increase by 5.4mbpd and data suggests that seaborne volumes of crude have increased in recent months.Product demand is also expected to improve as Covid restrictions are eased globally, although this could be uneven amid shifting patterns of consumption both due to the pandemic and the energy transition. Likewise, this improved demand could yet be held back by slower vaccination rates in Asia and the developing world, prolonging movement controls”. 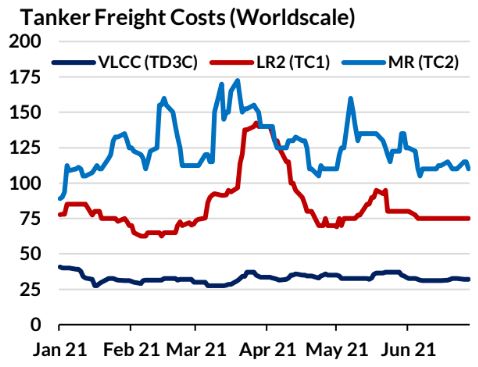 The shipbroker added that “the crude tanker market has suffered over the past six months, with typical freight volality in winter months being a rare event. TD3C struggled to gain ground and hovered in the low-mid 30s, which reflected in dismal VLCC earnings. Suezmaxes performed in a similar fashion, although they had a brief rally off the back of the short lived Suez Canal blockage in late March. Aframaxes too have experienced some volatility due to extreme weather conditions in North West Europe, Mediterranean and the US Gulf but generally earnings have remained in line with the broader tanker market. Owners will be hoping for a change in fortunes moving into the second half of 2021”.

Meanwhile, “product tankers have fared better in comparision. Atlantic routes benefited from extreme weather patterns earlier in the year and from the Colonial Pipeline outage in early May. East of Suez rates remained somewhat firm until late March/early April, helped by refinery closures/outages and the temporary closure of Suez canal; noneless, they too have come under downward pressure in recent months, following renewed infections in Asia. Overall, as the market faced each major and unexpected event, sufficient slack existed to absorb the disruption and limit any expected rate rises”, Gibson said. 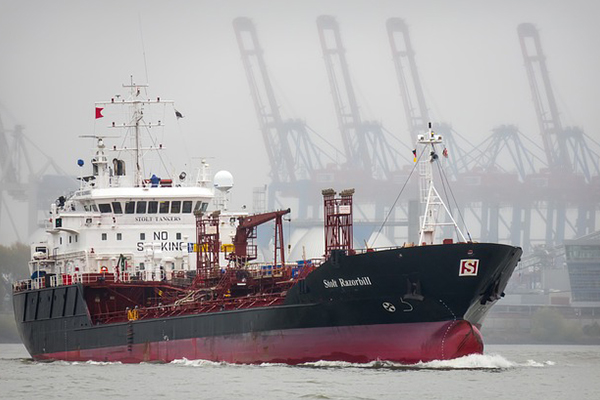 The shipbroker added that “regulatory and enviromental developments saw the IMO MEPC 76 meeting agree a set of measures to lower the GHG emissions of shipping, although this drew criticism for lacking ambition. Likewise, details will soon emerge on the the EU’s plan to include shipping in the Emission Trading Scheme (ETS). How this plays out in practice and the implications for vessel’s trading will have to wait to be seen but shows the shift from consultation to policy implementation for shipping in terms of dealing with emissions and it’s enviromental impact. More is likely to follow”.

“For oil markets, perhaps one of the most noticable trends so far in 2021 has been the rally in global oil prices, with Brent and WTI now firmly above $70/bbl. However, ultimately this does not necessarily suggest strength in oil demand and simply reflects the ability of OPEC+ to limit production. Whilst the recent disagreement among OPEC+ members to agree new output limits could yet drive the oil price further, particularly if demand continues to recover strongly. Higher oil prices are likely to support nonOPEC production, particularly in the US and there is emerging evidence this is already happening despite financial constraints and growing environmental pressure. The IEA estimates show the US oil supply could grow by 1.2mbpd over the next 18 months”, Gibson said.

“Looking ahead, many will hope improving oil market fundementals translate into an upturn in tanker rates. Tanker values are on the rise,with VLCC newbuilding prices the highest since May 2014. With scrap prices also at their highest since September 2008, this should aid demolition, although activity here has been unexpectedly low so far this year. Hopefully, the damaging effect of Covid-19 on oil demand will fade with time; netherlesless, the industry will continue to face the challenges ahead in terms of the enviroment and emissions”, the shipbroker concluded.
Nikos Roussanoglou, Hellenic Shipping News Worldwide