The tanker market seems to be plagued with yet another prolonged period of uncertainty, after the latest developments in Ukraine. In its latest weekly report, shipbroker Intermodal said that “the last 20 days the tanker market is taking another hit of uncertainty prior fully recovering from the pandemic. When uncertainty hits the market various opportunities are being created for the tanker Owners, that have already been under a lot of pressure for quite some time now. Vessels that were stranded waiting to load/discharge or had orders to load or discharge in Ukraine/Russian ports have amassed delays, creating shorter tonnage lists and therefore a more bullish sentiment along with bunkers that simultaneously were going off the roof. At the same time, owners who are willing to call Black Sea / Russian ports still get a premium”.

According to Intermodal’s Tanker Broker, Mr. Dimitris Kourtesis, “last week, P.O.T.U.S. announced that The U.S.A. will ban and stop importing gas / oil directly from Russia – rocketing Oil above $130 per barrel to later correct and settle just below $100. Discussions have started in order for the U.S.A. to find some middle ground with Venezuela and discuss terms on how and when they could lift sanctions to balance out some of the Russian oil. Taking such a decision, it will merely affect the oil market anytime soon, as due to sanctions, Venezuela hasn’t had the resources to do the necessary maintenance/upgrade to equipment, thus, means that the production capabilities will need a minimum of one year to actually start making a difference. Worth to mention that the U.S.A is about 7% dependent only on Russian gas and oil in contrast with Europe being heavily dependent on Russia for their energy resources, about 30% oil and 40% on total gas imports”. 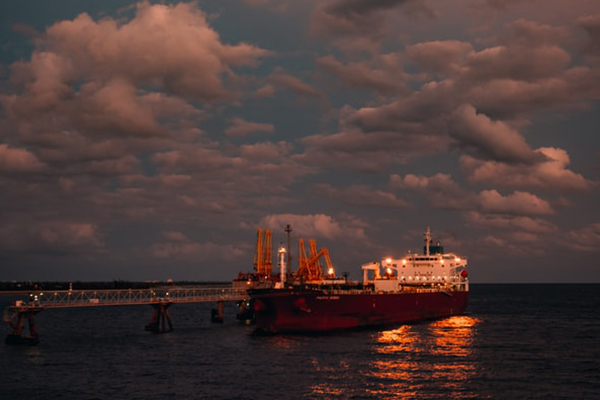 Mr. Kourtesis added that “limited cargoes for V’s loading AG and WAF most of them are being fixed on private basis, run to China (TD3C) after losing some points on Monday currently stand at WS43.55 and West Africa runs to China WS44.55. Cargoes generated from USG to China are traded at about $5.2 Million. Most of the Suezmax March program is now covered and there’s some scarcity on the available cargoes, the sentiment is softening, AG/MED is trading at WS47.38 and WAF/UKC WS77. Aframaxes sit on the quiet side with TD8 AG/SPORE below WS150 and cross med trips WS120. Owners still willing to call Russian ports are still trading with premium, i.e Black Sea / Med WS400, Baltic / UKC W550 and Kozmino (Russia) / North China $ 850’000. For Aframaxes and Black Sea/Med W250 for Suezmaxes”. 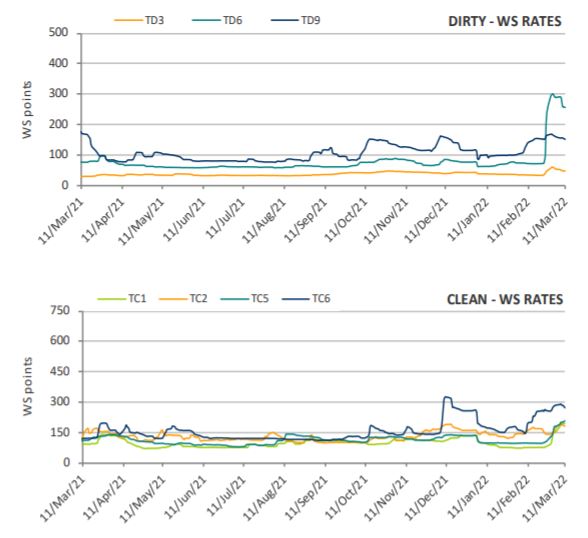 Intermodal’s broker also mentioned that “clean MR’S remain tight and perform extremely well on both markets. MR Atlantic basket is hovering slightly above USD20,000 PDPR and Pacific is holding firmly on the rates. Owners continue to be bullish along with a decrease in bunker prices this week, believing that the market will continue to be firm and tight for this week. The same applies for clean MR’s loading pacific Russia offers a premium, i.e., loading Russia to Singapore stands at $1.2-1.3 m for those willing and can do it. LR1 and LR2 sentiment is steady with AG/EAST at WS205 and WS185 respectively, LR1, loading AG with the option of discharging in WAF, Nigeria for $3.2-3.3M”, Mr. Kourtesis concluded.
Nikos Roussanoglou, Hellenic Shipping News Worldwide