The tanker market has a number of investment plays, with ship owners looking to take full advantage before the window closes. In a recent weekly note, shipbroker Intermodal said that “almost halfway through May, we see that most countries have slowly started to relax lockdown measures, which means that economies are jump starting again despite the fact that everyday life is different now compared to what it was before entering the quarantine. In Beijing and Shanghai, people avoid taking the subway and use private means of transport. According to Bloomberg, the subway ridership remains below 50% in Beijing and below 30% in Shanghai”.

Dimitris Kourtesis, Tanker Chartering Broker with Intermodal, “crude oil storage is still a very popular subject. India’s crude oil reserves for example will be nearly full by mid-May. The country’s administration is currently under discussions to draft the appropriate lockdown exit plan and with no specifics revealed yet, it is only natural that demand for crude and its products remains low. China’s crude inventories hit a record high on 17th of April. On that date the country was reported having about 940mb in its storage facilities, approximately 70mb more compared to a year ago. Chinese inventories have gradually started to shrink since then on the back of refineries drawing oil and increasing their output for gasoil/gasoline and oil products. When China’s crude inventories hit a record high, inventories in the US stood at 518mb, about 14% up from a year ago. In view of restricted travelling, US demand for jet fuel has been hit substantially, with supply year to date estimated at approximately 66% down as a result”.

According to Kourtesis, “the latest OPEC+ agreement that took effect on May 1st included generous cuts, while Saudi Arabia has also committed to increase these cuts by an extra million barrels per day during June. About a week after the agreement, we understand that the US had already started to cut production at a more aggressive pace, with reports suggesting that the additional cuts were in the region of 1.7mbd up until May 6th. Since the last week of April, when oil prices plunged to historical low levels, this is now the second week in a row that oil markets show signs of improvement”. 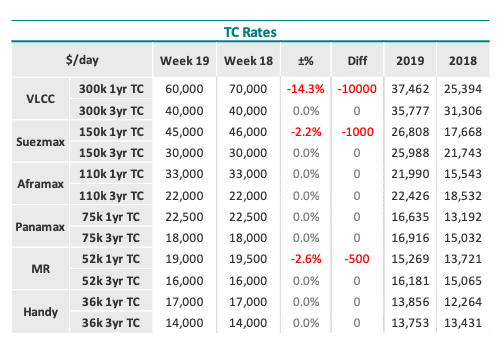 “When looking at tanker rates, it is obvious that the freight market is still moving within healthy levels despite the fact that the past couple of weeks have brought about corrections across all sizes/routes. It is worth pointing out that the VLCCs that were chartered as storage units are now slowly being delivered to their respective charterers and taking into account that recent enquiry for such employment was usually between 3 to 6 months, this means that most charterers believe that the contango market will have played out by that time. Additionally, we have been seeing many owners that were trading DPP deciding to clean their ships in order to make the most of the good CPP market, while a similar trend was also witnessed during the last months of 2019 when about 40 LR2 units switched from CPP to DPP to take advantage of the fuel play that was kicking off at the time. As countries around the world start to ease restrictions, it seems – and widely hoped – that this will be a U shaped recovery that will allow for a smooth transition to normality”, Kourtesis concluded.
Nikos Roussanoglou, Hellenic Shipping News Worldwide