Tanker freight rates have rallied during the past few weeks, in the aftermath of the attacks on Saudi Arabia’s oil facilities. With production now almost reaching pre-strike levels, it seems that the tanker market is primed for a sustainable rally, as the traditionally strong fourth quarter has officially began. In its latest weekly report, shipbroker Gibson said that “at the time of writing this report, spot TCE earnings on most benchmark crude trades stood at or close to their highest level this year, after firming spectacularly over the past two weeks, in part on the back ofthe attacks on Saudi oil infrastructure. This week’s US sanctions on two Cosco subsidiaries added more fuel to the fire. The current strength in rates has been triggered by geopolitics; however, both demand and supply factors suggest tightening tanker supply/demand balance as we approach the 4th quarter of the year”.

According to Gibson “weather related delays and disruptions traditionally offer seasonal support during the period to rates across all segments. For Suezmax and Aframax tankers, delays for passage through the Turkish Straits help to tighten tonnage availability and support earnings on regional trades. The 10-year average for both northbound and southbound delays for passing through the Straits stands at 10 days in Q4 versus 3.7 days in Q3. There are also fundamental factors. Global crude refining runs tend to increase in order to accommodate stronger demand during the winter season. This year, the approaching global sulphur cap on marine bunkers is anticipated to offer an additional boost to refining runs, with demand for distillates being the key driver. According the latest IEA monthly report, global crude refinery throughput is projected to average 83.7 million b/d in Q4 2019, up by 1.4 million b/d year-on year and up by 400,000 b/d quarter-on-quarter. While stronger demand from refineries is anticipated, the expectations are for substantial increases in crude production in the Atlantic Basin. US crude production is projected to average 12.78 million b/d in Q4, up by more than 0.5 million b/d versus the previous quarter (EIA). Pipeline capacity from the Permian Basin to the US Gulf is also expanding. 670,000 b/d Cactus II pipeline started initial operations, while 400,000 b/d Epic pipeline also commenced filling the line. Both lines are expected to ramp up throughput and export capabilities through the 4th quarter of the year. Furthermore, 900,000 b/d Gray Oak pipeline is projected to begin operations in Q4 2019. All of the above suggest strong potential for robust growth in US crude exports during the last three months of the year”. 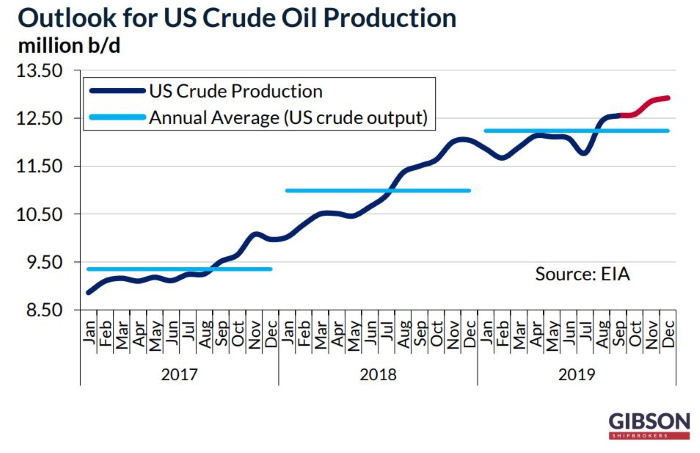 The shipbroker added that “meanwhile, across the Atlantic expectations are for sizeable increases in North Sea crude supply, following the start-up of the massive Johan Sverdrup oil field in Norway. Initial loading program shows 12 Aframax cargoes planned for October. Elsewhere, preliminary Urals loading program for October also shows a rebound in Russian crude exports out of the Baltic. This indicates an increasing surplus of crude supply in Europe, with the Johan Sverdrup start-up and more US barrels being shipped into the region being the key drivers. As refinery crude runs in Europe could remain under pressure due to economic turbulence, surplus regional production – North Sea, Black Sea/Mediterranean, Baltic or West African barrels are likely to flow on an increasing basis long haul to the East, translating into higher demand for larger crude carriers”. 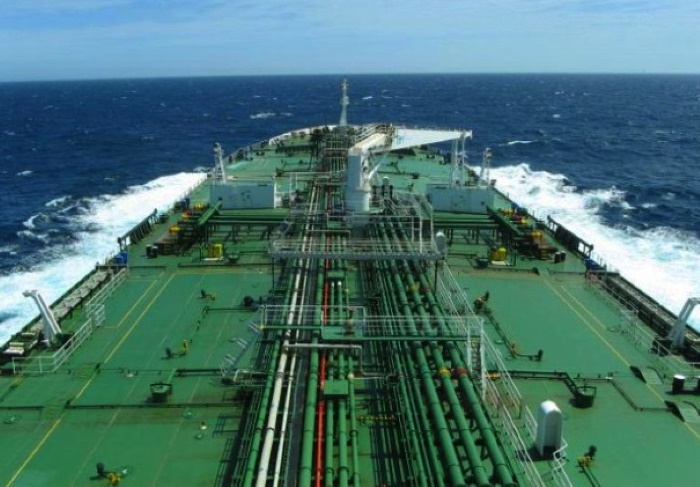 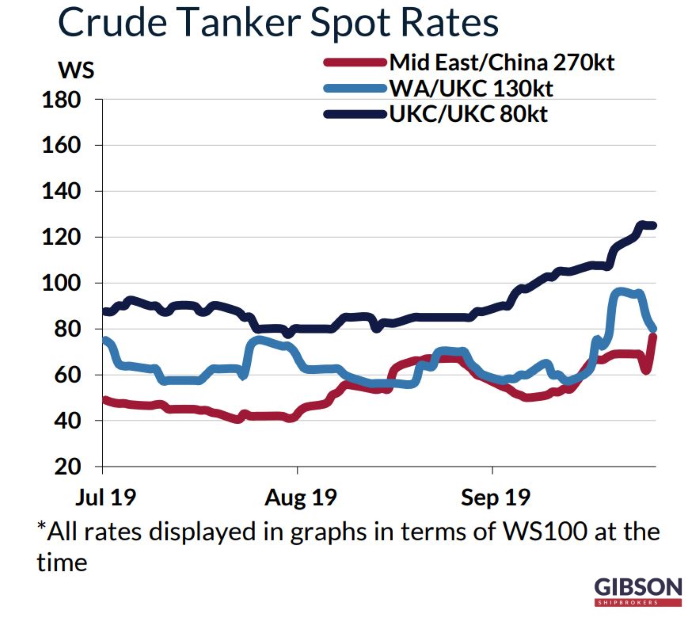 Gibson concluded that “while demand is projected to increase, there are also some positive indications on the tanker supply side. There are still 22 VLCC deliveries outstanding until the end of the year, but only 4 Suezmax and 9 Aframaxes/LR2 deliveries remaining. The market will also continue to benefit from scrubber retrofits taking place, with tonnage temporarily out of trading operations. Spectacular spikes in tanker rates have a tendency of being short-lived. Only time will show how long the current strength in the market will last. However, with market fundamentals improving in the 4th quarter, there is indeed potential for rates and earnings to maintain at least some of the latest gains”.
Nikos Roussanoglou, Hellenic Shipping News Worldwide