Tanker owners are having to cope with one of the most tense and complex geopolitical situations of recent times, when it comes to trading their fleet of vessels. Needless to say that uncertainty is prevailing at the moment. In its latest weekly report, shipbroker Gibson said that “not in a long time has the geopolitical situation in many of the worlds largest crude providers been so precarious. At the time of writing, many are still trying to understand the rationale behind the sabotage of vessels at Fujairah and drone attacks on Saudi Arabian pumping stations. With supply concerns in Iran, Libya and Venezuela already causing headaches and continued uncertainty over Russian crude shipments via the Druzhba pipeline, could potential supply disruptions put further pressure on prices?” 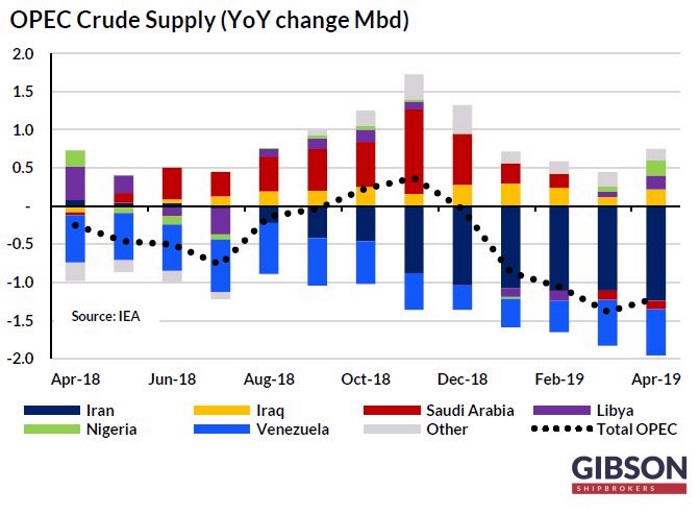 According to Gibson, “the latest IEA monthly oil report has suggested that concerns about supply could be offset by other producers who have indicated that they are willing to replace lost barrels (particularly Iranian) now the US waiver program has ended. Iranian seaborne exports in April dropped over 500,000 b/d from the previous month to just over 1.2 million b/d, down over 1.75 million b/d from the same period last year. Latest IEA figures also show that Venezuela is now producing under 850,000 b/d, the lowest figure ever seen on any database recording such figures in the past 20 years. The large drops in production from Iran and Venezuela have briefly been offset by greater output coming from Nigeria and Libya, despite ongoing unrest. However, no coordinated effort has been made to replace Iranian barrels as of yet. Current IEA figures show that OPEC alone has 3.19 million b/d in spare capacity, of which 2.21 million b/d comes from Saudi Arabia. However, despite the turmoil that seems to be escalating globally, crude prices have remained relatively stable, with Brent around $73/bbl. The biggest issue here of course is that the spare supply currently available is located where most of the geopolitical tensions currently lie”, the shipbroker said. 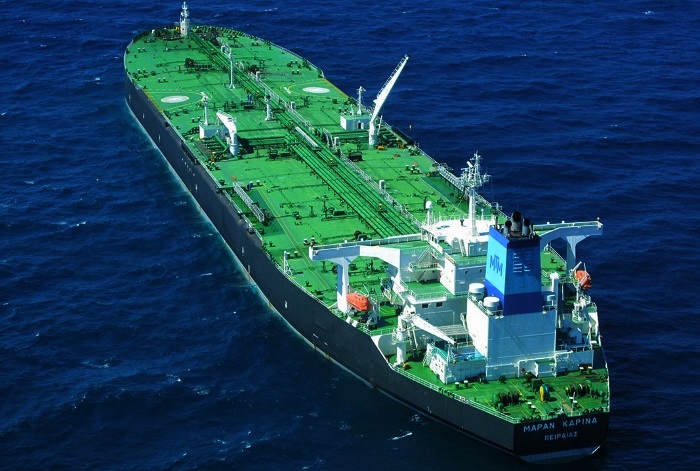 Gibson said that “alongside OPEC supply being tight, Non-OPEC production also fell 360,000 b/d in April to 63.6 million b/d. Despite this, Brazilian and US production increased. Brazil’s production was up to record levels at 2.8 million b/d, with China being their main export partner. Estimates are placing their end of year production to hit 3.2 million b/d. Strong growth from the US will also be needed in the 2nd half of the year to ensure the market remains adequately supplied in the absence of any OPEC increases”.

The shipbroker added that “with supply issues coming from some of the OPECs largest producers and non-OPEC supply growth predicted to slow to 1.8 million b/d in Q2 2019, production concerns could continue to drive up prices throughout 2019. Backwardation in crude futures has increased significantly, with front month prices $3.40/bbl higher than for 6 months out according to current ICE Brent contracts. Potential supply disruptions could mean major importers such as China look further afield for crude if traditional routes become too expensive or disturbed. Iranian exports have clearly taken a huge hit but continue to be exported under the radar, global crude supply is predicted to slow, and demand has been estimated to grow at a faster pace than supply. All eyes will be on the next OPEC meeting which is scheduled for June. Regardless of the outcome, current tensions in the Middle East will do little to comfort market participants. As it stands, markets seem to be teetering on a knife edge”, Gibson concluded. 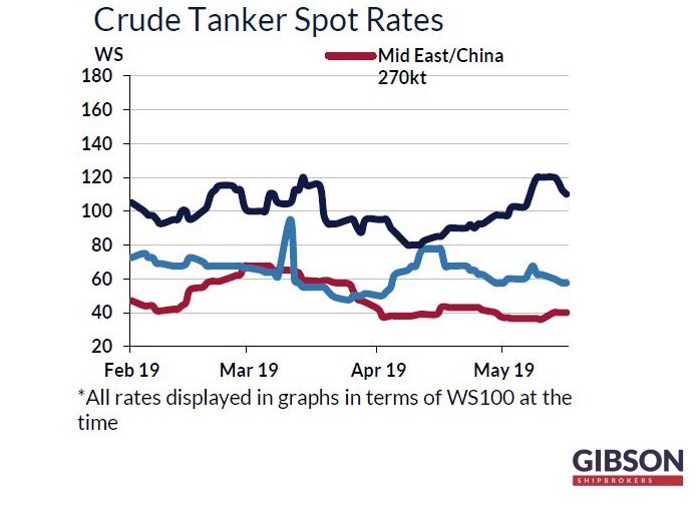 Meanwhile, according to the shipbroker, in the crude tanker market this week, in the Middle East, “with May VLCC cargoes being finalized, and fresh June programmes entering the marketplace, there was just enough volume to allow Owners to nudge rates a little higher. It remains a marginal gain; however, and Owners will need sustained, and concentrated, activity to engineer a more meaningful improvement next week. Currently, rates to the East operate at up to ws 41, with rare movements to the USGulf at little better than ws 18 via Cape. Suezmax availability continued to swamp modest demand and rates again stayed flatline at around ws 62.5 to the East and to ws 26 to the West. Aframaxes had hoped to continue last week’s upward move but demand faltered and rates quickly retreated to 80,000mt by ws 112.5, with further slippage likely”.
Nikos Roussanoglou, Hellenic Shipping News Worldwide