The tanker market ended year in lackluster mode, as rates were in downward trend for most classes. In its latest weekly report, shipbroker Affinity Research said that “despite the improvement in sentiment and momentum towards the end of last week, the VLCC market failed to capitalise this week. After the flow of cargoes, rates on TD3C inched up and there were hopes that there would be further gains this week, but instead they have remained flat. Chinese COA deals and vessels being picked off under the radar took the steam out of the market and TD3C remains at around WS 41.5. There has been some enquiry, but only enough to keep rates where they are, rather than to provide any further support. Rates in WAFR have followed the same pattern, with the Baltic Exchange calling TD15 at WS 42.5. There has been slight improvement in the USG, with TD22 up above USD 4,850,000 for the first time since early this month, but hopes of a pre-Christmas rush in the VLCC markets have been largely dashed”. 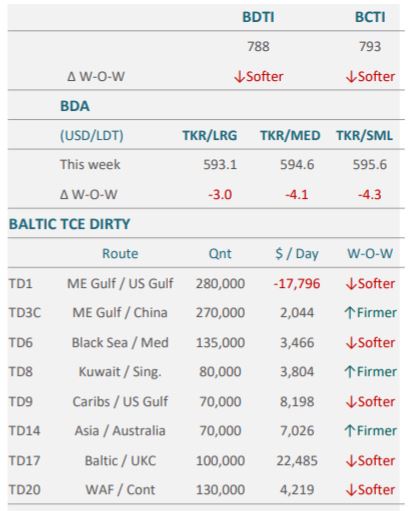 Meanwhile, Affinity said that “on the Suezmaxes, markets continued on their downward spiral this week, with enquiry drying up and sentiment continuing to soften. Charterers have taken advantage of owners not wanting to have their prompt vessels stuck over the Christmas period, and have applied pressure to rates, with TD20 down to WS 62.5 as of Thursday evening, according to the Baltic Exchange. In the Middle East, there is little change to the status quo, with VLCCs continuing to soak up most of the volume. There is little indication of any improvement emerging into next week”.

The shipbroker added that “on the Aframaxes, it’s been a largely flat and uninspiring week, with rates in the Med falling away slightly. Sentiment has softened due to a lack of activity and the Force Majeure at Zawia/Mellitah spat prompt vessels back out into the market, giving charterers more options and TD19 has been tested down from WS 115 at the beginning of the week down to around WS 110 levels. To the North, rates have been flatter. Ice business was tested down a little and dates have been well covered, resulting in last done being repeated. TD7 is at WS 110 – 112.5 levels, while TD17 is around WS 102.5 – 107.5”.

Meanwhile, “on the product side, it’s been a positive week for the AG LR2s, with owners dreaming big, despite the lack of cargoes. Tight tonnage is giving owners optimism, but there has been little demand in the market and charterers are putting off committing just yet. Nevertheless, TC1 has climbed by over 10 points since the end of last week, rising to WS 130 levels, with a WS 132.5 rumoured to be on subs. Westbound has also risen up to USD 2.55 Mn courtesy of a relatively prompt window. It has been softer on the AG LR1s, with all cargoes seemingly covered by mid-week. Towards the end of the week, the market appeared even softer; the list isn’t huge, but the lack of demand is weighing on sentiment. TC5 is down at around WS 127.5 levels. To the West, it has been a tougher week for the LR2s, with the lack of demand compounded by a lengthening tonnage list. The fixing window is well into the first half of January and the sheer volume of available tonnage has weighed on rates. Med/Japan is down to USD 2.05 Mn, and rates I the West will be tested, despite the comparative strength in the East market”. 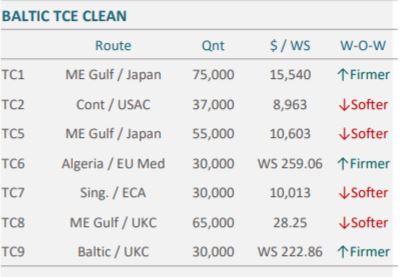 Affinity added that “in the Far East, activity on both the LR2s and LR1s was quieter this week and Korea/Singapore on LR2s is assessed at USD 575,000 – 600,000 LR1s are at USD 600,00 levels. Demand is weak, but there isn’t too much tonnage either, but the holiday lull could soften North Asia slightly. On the MRs in the AG, consistent enquiry has resulted in a solid week, but the approaching holidays pushed owners to take lower than last done when, in an ordinary week, they would perhaps have been inclined to push for higher. TC12 is assessed around WS 140, while TC17 has slipped to WS 207.5. To the West, it’s been a steady week of fixing, but TC2 has slipped down to 37 x WS 155 – 157.5 by the end of the week as owners moved to fix their vessels over the holiday period and settled for slightly lower rates. It was slow on UKC/WAFR, but the five-point premium still applies. Ice class ships on Baltic/UKC-TA are getting 37 x WS 207.5, while the Handies have held steady and ice class tonnage remaining tight; exBaltics are assessed at 30 x WS 225. In the Med, Handies have remained steady and the list on the front end has remained tight all week, with TC6 assessed at WS 260, with Black Sea/Med still at a 10-point premium. MRs had a good start to the week, but activity slowed down as the week progressed. Med/TA is assessed at WS 162.5 – 167.5”, the shipbroker concluded.
Nikos Roussanoglou, Hellenic Shipping News Worldwide