Tanker Shipping: Sky-High Freight Rates Have Given Way To A Profitable Winter Market Supported By The Fast-Approaching IMO 2020 Sulphur Cap

BIMCO expects freight rates will once again come under pressure after the end of the high seasonal demand in Q4, as well as the boost from the sulphur cap. The fleet growth of 6.3% in the crude oil tanker market and the 4.8% growth in the oil product fleet will have its consequences on the supply and demand balance.

Reported very large crude carrier (VLCC) earnings reached USD 307,888 per day on 11 October, although the following week they fell as quickly as they had risen. After the drop, rates stood at USD 74,681 per day on 1 November which, aside from the recent peak, is the highest level since early 2016.

So what drove up the rates in October? Geopolitics is the simple answer. The slightly more detailed response is that geopolitics and the refiners’ need for crude ahead of the 2020 sulphur cap on 1 January created a hefty demand cocktail.

On a geopolitical level, tighter US sanctions on certain oil tankers and shipping companies – as well as those limiting crude exports from Iran and Venezuela – and tension in the Persian Gulf and Red Sea, all had a significant impact on the market.

The geopolitics was combined with the seasonal boost that Q4 traditionally brings to the tanker market and mixed with refiners which were desperate to get crude oil to their facilities to ramp up production ahead of the new sulphur cap, which is likely to be highly lucractive.

Despite these factors, the fundamentals of the market remain unchanged, so the peak freight rates were unsustainable.

While reported earnings were more than USD 300,000 per day, anecdotal evidence suggests that all contracts higher than USD 200,000 per day quickly fell through once it became obvious the spike was very temporary. 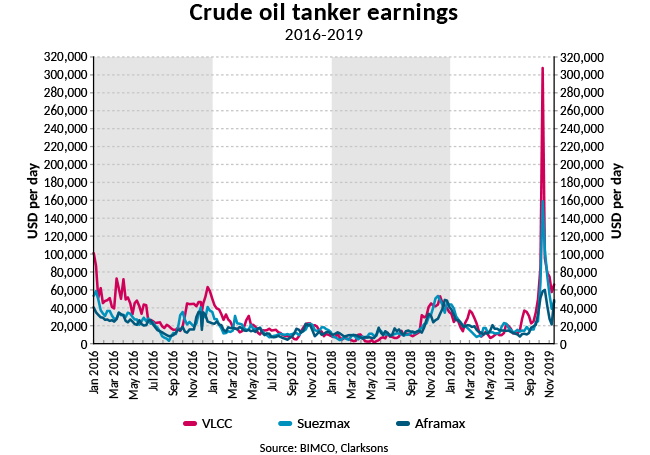 A spike in oil product tanker rates, lagged the peak in VLCC earnings by a week, but otherwise followed the same pattern: a sharp rise in mid-October, followed by falling rates. Here again, though, they remain above levels seen in recent years.

Some tankers left the scrubber fitting queue in China to take advantage of the strong market, but are expected to return to get a scrubber at a later stage. Clarksons estimates that 36% of VLCCs will be scrubber-fitted by the end of 2020. This will have an impact on freight rates and it is understood there is a premium for scrubber-fitted ships, at least on time charters. However, once the majority of ships become scrubber- fitted, it will become a discount for ships without, rather than a premium for those with.

Crude oil production by OPEC members has fallen in 2019, from 31.9m barrels per day (bpd) in 2018 to 29.4m bpd in Q3 2019. This is mostly down to the agreed supply cut, which has not been followed by all members,Iraq and Nigeria in particular.In addition, sanctions on Iran and Venezuela and the attack on a Saudia Arabian oil installation further lowered production. These changing patterns create longer distances between producers and the Asian markets, benefiting shipping.

Iranian crude oil exports have fallen substantially, although not quite to zero, since waivers on US sanctions granted to eight countries ran out. Chinese customs statistics show imports have continued, albeit at a much lower level than previously: in September, China reported imports of 0.5 million tonnes of Iranian crude oil, with exports down 45.8% in the first nine months of the year. On the other hand, the EU – where Italy and Greece had previously been large buyers – has apparently stopped all purchases of Iranian crude oil, with Eurostat not reporting any imports since December 2018. 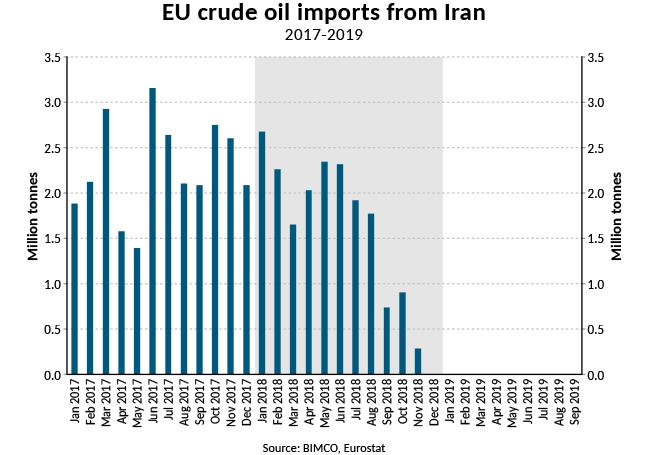 After a longer than usual maintenance season in US refineries, which has led to lower US oil product exports in the first eight months of 2019 compared with 2018, August was the first month since February in which exports were higher on a month-on-month basis. This brought year-on-year growth to -3.9%, rather than the -5.5% recorded in the first seven months of the year. 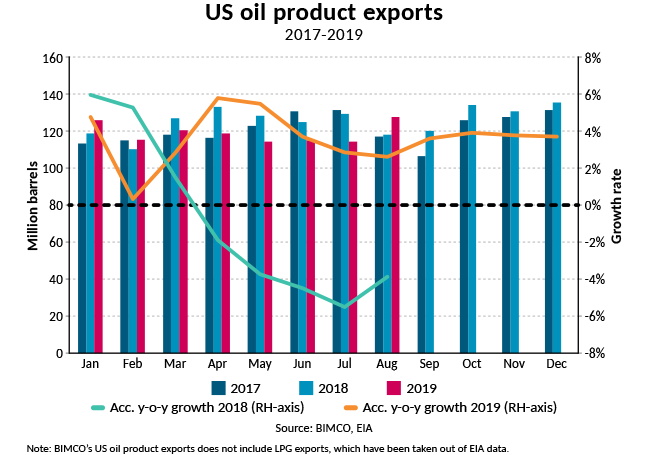 Traditionally, global refineries run maintenance in spring and winter but, this year, spring maintenance was prolonged to avoid long autumn shutdowns to allow refiners to focus on meeting increased demand ahead of the new IMO 2020 Sulphur Cap. BIMCO, therefore, expects crude oil throughput to continue growing during the last months of the year. Whether or not this will translate into higher oil product exports, and therefore boost the oil product tanker market, depends on whether or not buyers can be found. Production itself does not determine demand for oil product tankers.

Ramped up crude oil throughput has so far had little effect on US exports, with figures between August and October averaging 5.1m bpd, only 30,000 bpd higher than the average for the first six months of the year.

In anticipation of a strong demand boost from the IMO 2020 Sulphur Cap, shipowners have pushed up fleet growth – higher than needed, if judged by freight rate developments. 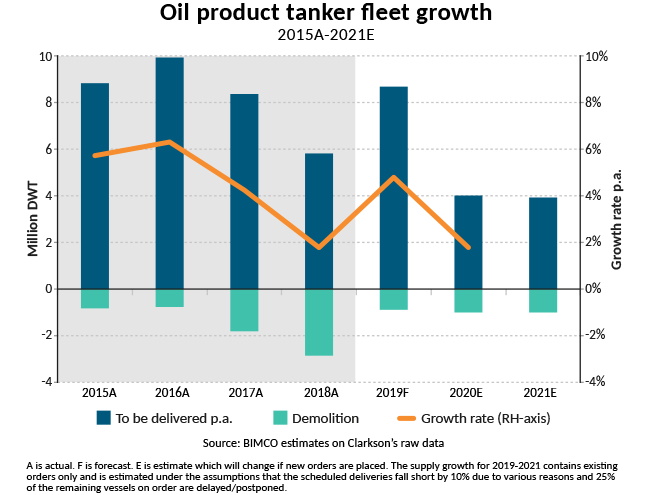 The oil product tanker fleet has seen a sharp rise in deliveries from 2018 which, combined with lower demolition, means that BIMCO now expects fleet growth of 4.8% in 2019, compared with 1.8% in 2018. Deliveries so far this year (8m DWT) have already overtaken those for the whole of 2018 by 2.2 million dead weight tonnes (DWT). BIMCO expects a further 0.6m DWT to be delivered before the end of the year. Demolitions currently stand at only 0.8m DWT, which BIMCO expects will rise to 0.9m DWT in the full year.

The largest share of the additional capacity comes from deliveries of Medium Range (MR) tankers. These average 48,549 DWT in size, bringing an extra 4.1m DWT into the fleet in the form of 85 ships. The majority of the remaining delivered capacity comes from 24 new LR2 tankers, amounting to 2.6m DWT.

The crude oil fleet is expected to see the highest growth of all of the main shipping fleets with a growth of 6.3% in 2019. In total, 27.5 million DWT of crude oil tanker capacity has been added to the market since the start of 2019, a number which towers over the 3.1m DWT that has been demolished.

BIMCO is currently forecasting that the crude oil tanker fleet will grow by around 1.5% in 2020, a marked slowdown from this year. Delivery of new tonnage is expected to be 50% lower in 2020 compared with 2019, with 15m DWT currently expected to arrive on the water; demolition activity is also set to rise. The joint effect will mean a slowing of fleet growth.

The International Energy Agency (IEA) expects OPEC production to fall by 1mbp in 2020 to 29mbp. In its latest World Oil Outlook, OPEC forecasts that, although its output will continue to fall through to 2024, worldwide oil supply is expected to rise. OPEC predicts 60% of global oil supply growth during this period will come from the US. 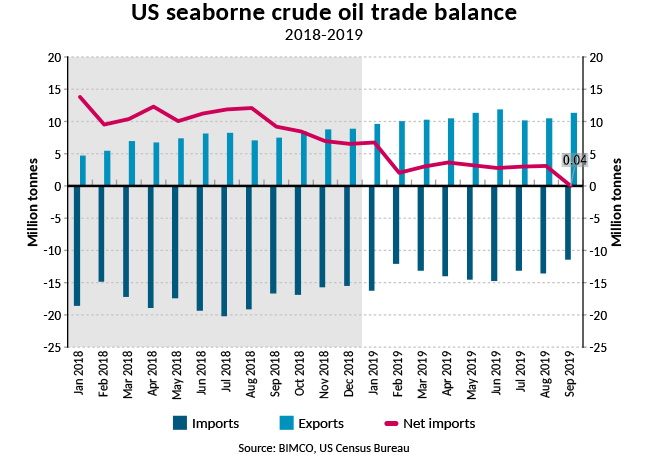 The US is currently set to continue expanding its crude oil exports in 2019, as well as the number of destinations to which it exports. Exports have consistently risen in the past few years after the US Congress lifted a ban on crude oil exports in December 2015, and increased the usage of fracking to extract it. The US is expected to become a net exporter of crude oil from Q4 2019. September was the first month in which the seaborne imports of the US were less than a million tonnes higher than exports, with net imports of just 37,304 tonnes. Average net seaborne imports per month stood at 10.2 million tonnes in 2018.

For shipping, the increasing proportion of exports from the US brings a higher tonne per mile demand as the US boasts longer sailing distances to European and Asian importing countries than many OPEC nations. This is one of the reasons why sanctions on Iran may give a boost to the tanker shipping industry. Increased US exports, including those to Asia, come despite a sharp drop in exports to China in the second half of 2018 and 2019 as a result of the trade war.

Anecdotal evidence suggests that a considerable number of VLCCs are being used as floating storage, especially in the Far East, ahead of the IMO 2020 sulphur cap added to which, ships are being taken out of the market for scrubber retrofits. Both of these developments have reduced the available capacity, supporting already high freight rates. This is however, a short term gain, as when these ships return to the market, the boost to freight rates will be gone.

BIMCO still expects the IMO 2020 Sulphur Cap to bring a boost to oil product tankers and help keep rates profitable in Q4 2019 and the first few months of the new year. Although the tanker shipping industry is likely to be the only part of the sector to see increased demand from the stricter sulphur cap, it will also face the same additional costs associated with compliance as other shipping segments.
Source: Peter Sand, Chief Shipping Analyst, BIMCO