Tanker Trade: What Does the War In Ukraine Mean?

The tanker market is already experiencing significant changes, as a result of the war in Ukraine, with trade being disrupted and crude flows expected to shift. In its latest weekly report, shipbroker Gibson said that “yesterday’s sudden invasion of Ukraine will have major ramifications, not just for the energy markets, but also for the security of Europe. Broad sanctions have been enacted by the major economies of the world. The European Union, US, UK, Japan, South Korea, Canada and Australia among other countries have targeted key members of Russia’s elite, banks and financial institutions, access to western technology and currency. However, sanctions have stopped short of direct restrictions on Russia’s energy trade. So, what does this mean for the world, and not just tankers?”

According to Gibson, “the failure to sanction energy exports does not mean that tanker trade will not be impacted. The number of companies willing to trade and transport Russian commodities has already declined regardless of the legal ramifications. Many large companies, particularly those who are public will not want to be seen supporting the Russian economy. However, with steep discounts being offered on Russian crude, and freight premiums for those willing to load at Russian ports, the trade will continue, although flows are likely to shift as both the EU and Russia are likely to be willing to reduce mutual interdependence. Urals crude fell to a -$11/bbl discount to dated Brent, whilst Aframax freight rates loading out of the Baltic hit WS350 (up WS247.5 points vs. Wednesday) and Handy tankers loading in the Black Sea saw WS140 point premiums over Mediterranean load ports. Premiums are likely to remain volatile into next week as the crisis progresses and depending on whether further sanctions are enacted”. 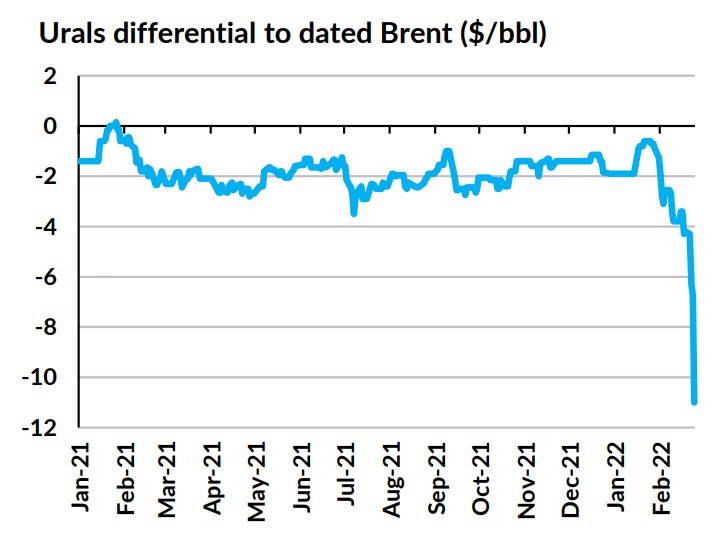 The shipbroker added that “increased flows are expected to head to Asia, in particular China which was already the largest buyer of Russian seaborne and pipeline exports. Pipeline exports directly into China averaged 800 kbd last year according to Argus, while just over 700 kbd was exported from Kozmino, with the vast majority of ESPO crude heading to China as well. Collectively Europe was the largest buyer of Russian crude exports, and it is now expected that European refineries will seek to increase intake of grades from the Americas, Mediterranean, North Sea, West Africa and Middle East. However, ongoing OPEC+ production restraint and low commercial inventories complicate matters. OPEC will almost certainly be under pressure from the West to boost production, with the group due to meet next Wednesday. However, Russia’ seat at the table within OPEC+ underscores the challenge. IEA member states will also consider releasing government-controlled stocks to ease prices, although it is unlikely to have a major impact”.

“Of course, it cannot be ruled out that the crisis will escalate further. NATO has made it clear that it will not fight Russian troops in Ukraine; however, any attack on a NATO member would trigger Article 5, which states an attack on one NATO member is an attack on all. Further sanctions have also been held in reserve. Excluding Russia from the global payment system SWIFT is a hotly debated topic, which so far has not been enacted, whilst more broader sanctions on Russian energy trade would likely be the final resort”, Gibson added. 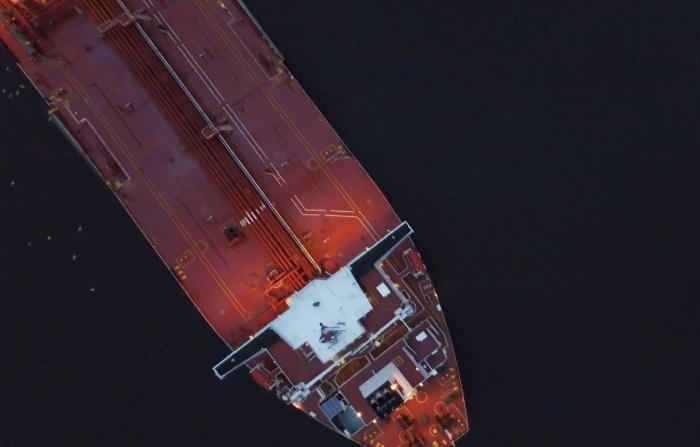 “The overall impact on the global economy and oil demand will become more apparent over the coming weeks, if not months. Higher prices will threaten to slow the recovery in oil demand, whilst it is uncertain what impact reduced mobility/trade might have on demand levels. For tankers, those willing to trade Russian cargoes are likely to continue to ‘enjoy’ freight premiums; however, it is unclear how long trading Russia will remain sanctions free. Russian trade remains under threat and much here depends on how the conflict evolves over the coming days. If sanctions bite, then Aframax and Handy tankers will be the biggest losers, although increased longer haul imports into Europe will support tonne mile demand, if the volumes are comparable to any losses from Russia. Uncertain times ahead”, Gibson concluded.
Nikos Roussanoglou, Hellenic Shipping News Worldwide