The tanker market edged higher during the final month of the first quarter of 2021. According to the latest monthly report from OPEC, dirty tanker rates picked up in March, as gains in Suezmax and Aframax rates outpaced a further slight decline in VLCCs. Increases in the these vessel classes were driven by tighter tanker supply as the blockage of the Suez Canal kept ships waiting on both sides of the waterway amid uncertainties regarding when the disruption would be resolved. After the container ship ‘Ever Given’ was dislodged at the end of the month, rates fell back toward levels seen at the start of the year. The upcoming 2Q seasonal refinery maintenance in Asia also reduced support by the end of the month. Clean tanker rates in March saw an improved performance East of Suez, while West of Suez routes around the Med eased from the higher levels seen last month.

Spot fixtures
Global spot fixtures declined m-o-m in March, falling around 1.4 mb/d, or more than 8%, to average 14.7 mb/d. Spot fixtures were around 5.2 mb/d, or 26%, lower than the same month last year. Uncertainties about the duration and impact of the Suez Canal shutdown encouraged charterers to delay bookings, amid an environment of ample tonnage availability, certainly once the situation was resolved. An increase in Middle East to East fixtures were more than offset by declines to the West and outside the Middle East.

Sailings and arrivals
Sailings improved m-o-m in March, with OPEC sailings averaging 21.3 mb/d. This represented a gain of 1.0 mb/d, or almost 5%, m-o-m. Y-o-y, OPEC sailings fell 2.5 mb/d, or over 10%. Middle East sailings increased 0.5 mb/d, or more than 3% m-o-m, to average 15.9 mb/d. Y-o-y, sailings from the region were down 1.2 mb/d, or 7%, compared with the same month last year. Crude arrivals were higher y-o-y on most routes in March, but experienced mixed movements compared with the previous month. 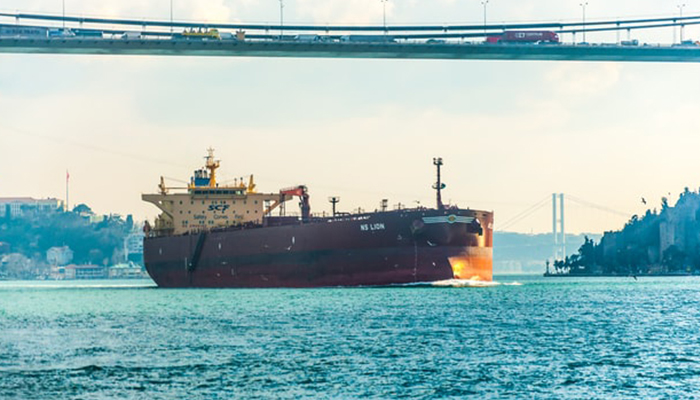 Very large crude carriers (VLCCs)
After declining the month before, VLCC spot rates slipped in March, down just 1% m-o-m, although were 75% lower compared to the same month last year. Rates were less impacted by uncertainties regarding the closure of the Suez Canal and more by the decline in taker demand with the onset of 2Q seasonal maintenance in Asia.

Suezmax
The Suezmax class rose for the fourth month in a row in March to show a gain of 17%. Compared with the same month last year, average Suezmax rates were 45% lower. The further m-o-m gains were triggered by uncertainty caused by the disruption of the Suez Canal. On the morning of 23 March, the 220,000-tonne container ship ‘Ever Given’ ran aground in the canal, blocking all traffic through a waterway that carries about 12% of global trade. By the time the vessel was finally dislodged on 30 March, some 367 ships were awaiting transit through the canal, up from 14 immediately after the ship’s grounding, according to Egypt’s Leth Agencies. These included an estimated 35 crude and 14 product tankers, as well as 16 LNG and 10 LPG carriers. Suexmax tankers are the primary vessels used to carry crude through the canal, averaging around 45 per month. Uncertainty regarding the impact and duration of the disruption temporarily boosted rates for this class and at the same time delayed some cargoes as charterers awaited a clearer picture on how long flows would be disrupted. With the blockage resolved, Suezmax rates fell back from higher levels. While the routes listed in the chart below were not directly impacted by the Suez Canal disruption, they did see some support from an overall tighter market, on the principle that rising tides lift all boats. Suezmax rates averaged WS62 points in March on the West Africa-to-US Gulf Coast (USGC) route, representing a 23% gain from the month before. Y-o-y, rates were still 50% lower than in March 2020. Meanwhile, spot freight rates on the USGC-to-Europe route rose 12% m-o-m to average WS60 points but remained 39% lower compared with the same month last year.

Aframax
Aframax rates showed the best performance m-o-m in March relative to the larger classes. Gains were seen across all routes, with average rates rising 32% m-o-m. However, rates were still 17% lower compared with the previous year. Support came from the disruption in the Suez Canal, picking up rates from very low levels.

The largest monthly gains were seen in Asia and the Americas. The Indonesia-to-East route rose 39% to average WS90, which was some 26% lower y-o-y. Higher refinery run rates in the region just ahead of the April maintenance season provided some support to rates. The Caribbean-to-US East Coast (USEC) route also enjoyed a 39% m-o-m increase to average WS137. A return from disruptions caused by the closure of US Gulf ports due to freezing weather in February supported the recovery. Y-o-y, rates on the route were still 17% lower. More directly impacted by the situation in the Suez, Med routes experienced increases in March, having been previously supported by weather disruptions in the Turkish straits. The Mediterranean-to-Northwest Europe (NWE) route rose 25% m-o-m to average WS121, which still represented a decline of 13% y-o-y. The CrossMed route rose 27% m-o-m to average WS125, representing a 12% drop y-o-y.

East of Suez rates rose by 27% in March but still showed a 15% loss y-o-y. The Middle East-to-East route rose 38% in in March to average WS112. This represented a 26% decline compared with the same month last year. On the Singapore-to-East route, clean freight rates recovered from the previous month’s losses, up 20% m-o-m in March. With an average of WS146, rates were still 5% lower compared with March 2020. West of Suez experienced an 8% decline m-o-m in March and was 24% lower y-o-y. Declines were seen on the Cross-Med and Med-to-NWE routes, which fell 13% each to average WS142 and WS150 points, respectively. In contrast, rates on the NWE-to-USEC route increased 5% m-o-m, to average WS140 points, but remained around 25% lower compared with the same month last year. The monthly gains were driven by increased demand for European product exports to the US East Coast, particularly for gasoline. This has been a longstanding trade pattern for decades and one that that was more accentuated in March due to disruptions from once-in-a-generation freezing temperatures in the US Gulf Coast, home to the country’s refining complex.
Nikos Roussanoglou, Hellenic Shipping News Worldwide