TECO 2030 ASA leads a consortium with partners Umoe Mandal and BLOM Maritime to develop a hydrogen powered high-speed vessel with zero emissions. The consortium will receive up to 5 million NOK in funding support. The vessel will combine the class-leading fuel cell systems from TECO 2030 and energy-efficient catamaran design with SES technology from Umoe Mandal. The vessel will have the capacity to transport 200-300 passengers at speeds above 35 knots while sailing over long distances.

In the project “High-speed vessel of the future”, the county municipalities of Finnmark, Nordland, Trøndelag and Vestland aims to develop groundbreaking technology in several areas. One of the technology segments is to develop, build and demonstrate the world’s first hydrogen-powered high-speed vessel. The consortium of TECO 2030, BLOM Maritime and Umoe Mandal is one of three qualified consortiums.

“We are humble and proud to be qualified for developing the high-speed vessel of the future, powered by hydrogen and TECO 2030 Fuel Cells. This proves our ability to lead advanced vessel developments and design either it is retrofit or newbuilds through our maritime expertise,” says Tore Enger, Group CEO, TECO 2030. 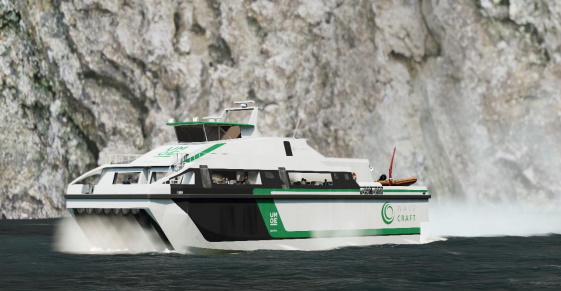 TECO 2030, Umoe Mandal and BLOM Maritime will base the high-speed fuel cell vessel design on energy-efficient hulls with SES technology.

“Umoe Mandal has over 30 years of experience in delivering light-weight and energy-efficient vessels, based on the SES (Surface Effect Ship) Technology. . This includes the world’s fastest combat ship, the Skjold class corvette, and the Wavecraft CTV series for the offshore wind market. We are excited for this opportunity to develop and approve a hydrogen-powered zero-emission version of our vessels” says Tom Harald Svennevig, CEO, Umoe Mandal.

The contract contains two phases, where the consortia in 2022 and 2023 will first develop and get their solutions approved. In the next phase, one supplier will be chosen to build and demonstrate the newly developed vessel. The vessel will be in pilot operation from 2025.

2022-07-05
hellenicshippingnews...
Previous: Korean shipyards at order heyday cannot keep up due to labor shortage
Next: FSL Trust Completes Disposal Of One Chemical Tanker