The Norwegian cleantech company TECO 2030, which is developing solutions to help cut emissions from ships and other heavy-duty applications, has today taken over the building that will become home to its new fuel cell giga factory in Narvik in northern Norway.

TECO 2030’s planned combined fuel cell factory and innovation centre in Narvik will become Norway’s first large-scale production of hydrogen-based fuel cells. The plant will be established in a facility that was previously home to a factory operated by solar company REC.

“This building is highly advanced, ready to be put to use and is perfect for us. We will now spend the next couple of months evaluating what of the existing infrastructure there we can use, before the detailed planning of the plant and the production lines starts in the autumn,” said Erling Hoftun, chairperson of TECO 2030 Innovation Center AS.

“We will start the process of hiring people to work at the plant in the first half of 2022, and we plan to begin manual pilot production of fuel cells at the factory already later the same year,” said Hoftun.

The engine of tomorrow

Hydrogen fuel cells are the engines of tomorrow and convert hydrogen into electricity while emitting nothing but water vapour and warm air. By installing hydrogen fuel cells, ships and other heavy-duty applications that currently get their energy from diesel engines or diesel generators can switch from fossil fuels to climate-friendly hydrogen and become completely emissions-free.

TECO 2030 is developing fuel cell technology in cooperation with the Austrian powertrain technology company AVL, which will also contribute to the planning and establishment of the combined factory and innovation centre in Narvik.

The building where the plant will be located is owned by the property company Teknologiveien Eiendom AS, which is renting it out to TECO 2030 ASA on a long-term lease agreement with a purchase option. 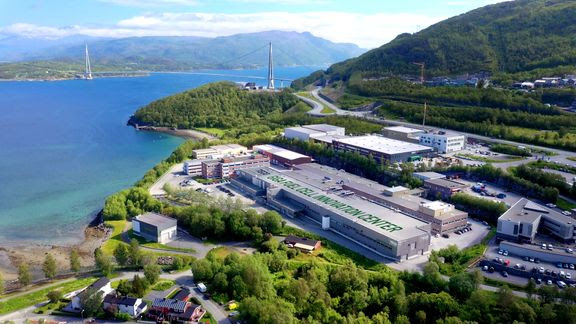 High levels of support from the local community

TEC0 2030 announced in March that the company had decided to establish its planned fuel cell giga factory and innovation centre in Narvik, and has since been met with a lot of enthusiasm from the city’s local community.

“We are very grateful for the support we have received from the local community in Narvik. We have experienced enormous levels of excitement from the people living in the city and its surroundings, and we have received many inquiries from people who want to help us with establishing the factory,” said Hoftun.

TECO 2030 is currently in the process of evaluating different financing alternatives for the giga factory and innovation centre and is exploring different possibilities for getting public funding for the project.

Will create up to 500 new jobs in Narvik

Over the next ten years, TECO 2030 expects total investments in the plant in Narvik to amount to up to NOK 1 billion. During that period, up to 500 new jobs may be created in Narvik within development, pilot production and full-scale production.

TECO 2030 expects to have around ten employees at the plant already by the end of 2022 and about 100 before the end of 2025. As many of these as possible will be recruited locally. People with different kinds of skills and competences will be needed, such as electricians, mechanics, plumbers, engineers and civil engineers within process, electric power, electronics and automation.

“The establishment of our combined factory and innovation centre in Narvik will not just be good for the climate because the fuel cells that will be produced there will contribute to reducing emissions from the maritime sector. It will also contribute to economic growth in northern Norway,” said Tore Enger, Chief Executive Officer of TECO 2030 ASA.

“The new factory will lead to the creation of new jobs in northern Norway and will increase Norwegian competence in the production of fuel cell systems,” said Enger.

The production of fuel cells for use within the maritime industry is still in early stages, and TECO 2030 will therefore give research communities – such as universities and other non-profit organisations – the opportunity to use the plant’s fuel cell element testing facilities during periods when they are not used.

TECO 2030 plans to produce fuel cells with a total capacity of 10 MW at the factory in 2022 and intends to gradually scale up the plant’s output over the following years. By 2030, the factory will be able to produce 1.2 GW of fuel cells every year, which will lead to several billions of NOK in annual turnover.

Fuel cells with a combined capacity of 1.2 GW can produce as much electricity is a large nuclear power plant.

When ships replace their diesel engines with these fuel cells, the result will be annual emission savings of around 4 million tonnes of CO2, which is equivalent to the total annual emissions of approximately 870,000 diesel and petrol cars, according to numbers from the U.S. Environmental Protection Agency.

International shipping is vital to world trade but leads every year to high levels of greenhouse gas emissions and pollution.

To create a more sustainable maritime industry, the International Maritime Organization (IMO) aims to reduce carbon intensity in international shipping by 40% by 2030, and to cut the total annual greenhouse gas emissions from the sector by at least 50% by 2050 compared to 2008.

Across the world, ships will therefore have to do something to reduce their climate and environmental footprints. By developing technology that helps ships to reduce their emissions, TECO 2030 aims to contribute to the green transition within the maritime sector.

TECO 2030 ASA was founded in autumn 2019 and the company’s ambition is to become one of the leading suppliers of zero-emission technology for ships. The company has its roots in TECO Maritime Group, which has delivered technology and services to the global shipping industry since 1994.

TECO 2030 is headquartered at Lysaker, just outside of Norway’s capital Oslo, and was listed on Euronext Growth on Oslo Stock Exchange in autumn 2020. The company currently has around 20 employees.
Source: TECO 2030 ASA