TECO 2030 (OSE: TECO) has been granted NOK 50 million in Norwegian government support for its development of hydrogen fuel cells, which will lead to the creation of up to 500 new jobs in northern Norway by 2030 and contribute to reducing greenhouse gas emissions.

“What TECO 2030 is doing is pioneering work that has the potential to change shipping, cut emissions and create new jobs in northern Norway. This is inspiring work, and I wish TECO 2030 the best of luck with their exciting project,” says the Norwegian Minister of Trade and Industry, Jan Christian Vestre.

“I am convinced that many of the good and green solutions that will contribute to changing the world will come from Norwegian workplaces. That is why I find TECO 2030’s development project incredibly exciting,” says Vestre.

The support has been granted by Innovation Norway, which is the Norwegian government’s most important instrument for innovation and development of Norwegian enterprises and industry. 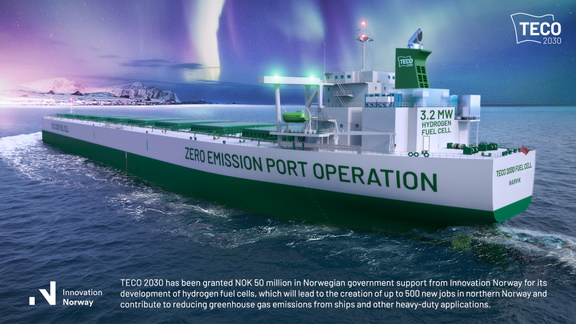 TECO 2030 has been granted NOK 50 million in Norwegian government support for its development of hydrogen fuel cells, which will lead to the creation of up to 500 new jobs in northern Norway by 2030 and contribute to reducing greenhouse gas emissions.

Highest amount awarded to one single project so far in 2021

The funding Innovation Norway has now awarded to TECO 2030 is the highest amount it has granted to one single project so far this year.

The funding will go towards the development and testing of the TECO 2030 Marine Fuel Cell, the first fuel cell system in the world that is specifically designed for use onboard ships and on other heavy-duty applications.

“Our support to TECO 2030 is one of several contributions to the green transition in Norway,” says Håkon Haugli, Chief Executive Officer of Innovation Norway.

“At the same time, we see that their project could in the long run create a significant number of jobs in Narvik. Our task is to contribute to business development throughout Norway, and we believe that TECO 2030’s solutions have great potential, both in the Norwegian market, and internationally,” says Haugli.

“We are absolutely thrilled that Innovation Norway has decided to support our work on developing hydrogen fuel cells. This clearly shows that the Norwegian government believes in our technology and our plans, and we are very happy and grateful for that,” says Tore Enger, Chief Executive Officer of TECO 2030 ASA.

“With support from the Norwegian government, we will continue our work on developing fuel cells and establishing a factory in Narvik where these will be produced. This plant will contribute to economic growth and the creation of new, green jobs in northern Norway,” Enger says.

“The fuel cells we will produce here will help to reduce the environmental and climate impacts of ships and other heavy-duty applications and enable them to cut their emissions to zero,” he says.

A prerequisite for receiving the support from Innovation Norway is that TECO 2030 raises around NOK 160 million in additional funding from other investors before the end of March 2023.

TECO 2030 has already been granted up to NOK 5.4 million in indirect government support in the form of tax deductions for developing the plant’s first semi-automated production line, as announced in September.

Will create up to 500 new jobs in Narvik

Over the next ten years, TECO 2030 expects total investments in the plant to amount to up to NOK 1 billion. During that period, up to 500 new jobs may be created in Narvik within development, pilot production and full-scale production.

The capacity will be gradually scaled over the following years, and the goal is that by 2030, the plant will be able to produce up to 1,200 MW of fuel cells every year, which could lead to several billions of NOK in annual turnover.

Will cooperate with research communities

TECO 2030 has signed an agreement with UiT The Arctic University of Norway – which has a campus in Narvik – to cooperate on enhancing research and education in Norway on hydrogen and fuel cells.

As part of the agreement, TECO 2030 will in cooperation with UiT give research communities the opportunity to use the fuel cell element testing facilities at the TECO 2030 Innovation Center during periods when they are not used in the production.

Will produce the engine of tomorrow

TECO 2030 is developing fuel cells together with the Austrian powertrain technology company AVL. Hydrogen fuel cells are the engines of tomorrow and convert hydrogen into electricity while emitting nothing but water vapour and warm air.

By installing fuel cells, ships and other heavy-duty applications that are powered by diesel engines or generators can switch from fossil fuels to hydrogen and reduce their greenhouse gas emissions to zero.

With hydrogen fuel cells, ships can sail emissions-free either on the whole journey or on shorter distances, such as when sailing into and out of ports.

Hydrogen fuel cells can also be used during port-stay, loading and discharging, enabling zero-emission operation at berth, without having to connect the ship to an onshore power supply.

A zero-emission alternative to batteries

Hydrogen fuel cells offer a zero-emission alternative for applications for which batteries are not a good option. Batteries are large and heavy, have a limited range and take a long time to charge. This is not suitable for all ships, and fuel cells may therefore for many be a better solution.

Fuel cells have a longer range, weigh less, and take up less space than batteries. They do not need to be recharged and can instead be refuelled with hydrogen.

TECO 2030 plans to test pilot versions of its fuel cells on the new hydrogen-powered tugboats and transport barges of the Dutch shipowner Chemgas Shipping, which will operate on the Danube, the second longest river in Europe. The first delivery is scheduled to take place in 2023.

Green transition in the maritime industry

Ship-owners across the world will therefore have to do something to make their vessels more climate-friendly, and TECO 2030 will help them with that.

TECO 2030 is delivering technology that helps ships to reduce their environmental and climate impacts. In addition to hydrogen fuel cells, the company is developing carbon capture and exhaust gas cleaning systems for the maritime industry, which will enable ships running on fossil fuels to reduce their environmental and climate footprints.
Source: TECO 2030