U.S. and international business executives and senior government officials gathered in Washington, D.C. on June 18-20, 2017 for the largest-yet SelectUSA Investment Summit, the highest-profile event promoting foreign direct investment (FDI) in the United States. Among the new FDI companies in attendance was GT USA, the cargo terminal operator that recently began operations in Florida.

In line with the 2017 Summit theme “Grow with US”, GT USA CEO Peter Richards met with Barbara A. Leaf, U.S. Ambassador to the United Arab Emirates, and other government and corporate representatives to provide an update on operations since the opening of the company’s first North American investment. 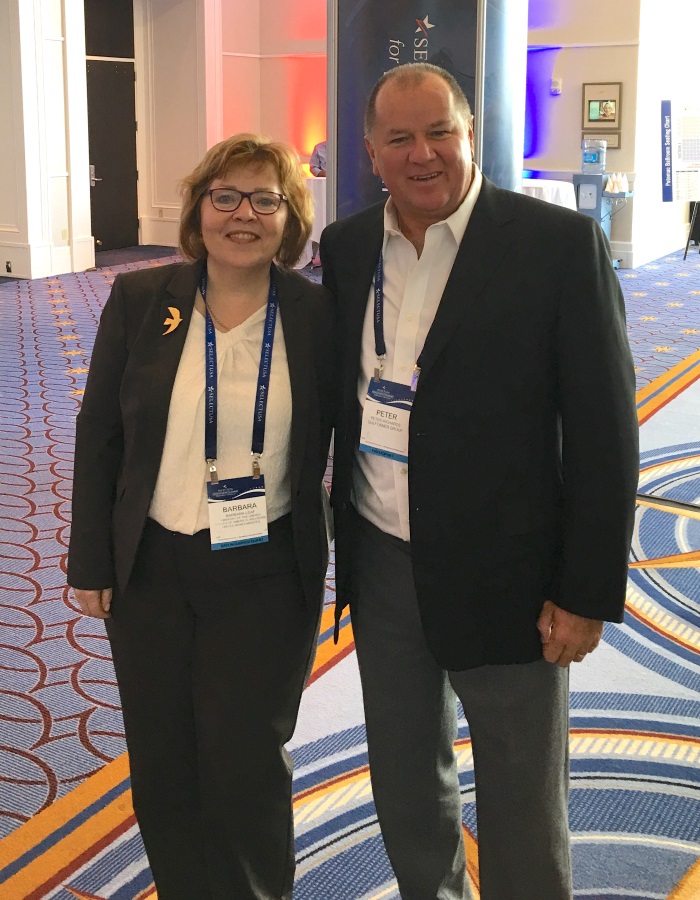 Barbara A. Leaf, U.S. Ambassador to the United Arab Emirates, meets with Peter Richards, CEO of GT USA, during the SelectUSA Investment Summit in Washington.

“Based on the success Gulftainer has found at Port Canaveral, we continue to look for future investment opportunities in the United States as we expand GT USA’s market presence and forge new partners in trade,” Richards said.

Among the key topics, the summit brought together experts in the field of public-private partnerships together to discuss the challenges and opportunities of American infrastructure investment.

Capitalizing on a strong international reputation, Gulftainer signed a historic 35-year agreement with Canaveral Port Authority to develop and operate a multipurpose cargo and container terminal at Port Canaveral. Gulftainer, the largest privately owned, independent terminal operator and logistics company in the world, is based in the UAE.

At the recent U.S. Chamber of Commerce Invest in America Summit in Washington, Gulftainer’s multimillion-dollar investment in GT USA was heralded by Saud Al Nowais, commercial counselor for the United Arab Emirates to the United States, as an example of the high potential for UAE business ventures in the United States. He noted that the UAE has moved up to 7th place in the list of the fastest-growing sources for attracting direct foreign investment to the United States.

As a startup multi-purpose cargo and container terminal, GT USA is bringing significant, growing and sustainable economic impact to the region in line with the Canaveral Port Authority’s vision to establish a new gateway for trade and a catalyst for business growth on Florida’s East Coast.
In addition to containers, the terminal customer base also includes vehicles, break-bulk and heavy lift cargo. GT USA enhanced its supply chain capabilities in 2016 to serve domestic and international shipping lines with the addition of more than 40,000 square feet of covered storage at Port Canaveral. GT USA provides a full range of logistics services, including trucking, cross docking, storage and inventory control and last mile distribution.

Operating the terminal and moving cargo in and out of Port Canaveral, GT USA’s hiring includes over 45 employees involved in administration, stevedoring, logistics, safety, security and IT, who subsequently work with dozens of third party workers who provide a multitude of services.
Source: GT USA

2017-06-22
hellenicshippingnews..
Previous: Cargo loading, unloading at Iranian ports up by over 10%
Next: Qatar’s bunker move not enough to replace displaced Fujairah demand