The costs of greenhouse gas reduction in shipping

Who wouldn’t want to know how much reducing shipping’s greenhouse gas (GHG) emissions will all cost? It’s a buzz word (or a statement) resonating amongst stakeholders, public policy forums and private industry alike.

Following the achievement made by the IMO in April in MEPC 72, which agreed to cut annual GHG emissions by ‘at least’ 50% by 2050 on 2008 levels, there is an increased appetite to know what policy measures and technological solutions will be required to meet this ambitious aim — and of course at what cost.

The IMO roadmap has specifically asked for inputs on costs and benefits (ISWG GHG 1/2) and to that end the IMarEST responded with two papers on costs of GHG reduction in international shipping (ISWG GHG 2/4 and ISWG GHG 3/3) – see graph below. 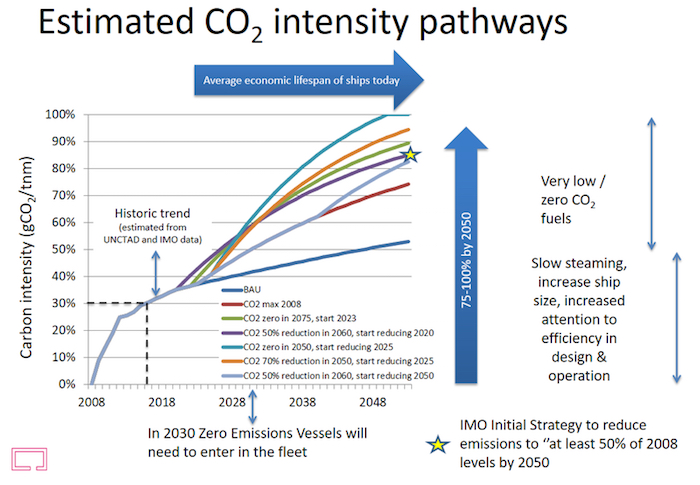 What is clear is that enabling absolute GHG reductions whilst supporting growth in trade will mean that high rates of operational carbon intensity (grams of CO2 per tonne mile) reduction are required, in the range of 75%-100% reduction.

This means that operational efficiencies from slow steaming and technical energy efficiency measures will not be adequate and this gap will need to be fulfilled with very low/zero-CO2 fuels, such as hydrogen, ammonia, biofuels and batteries, in a range of different fuel and machinery combinations.

A recent report by Lloyd’s Register and UMAS, ‘Zero Emission Vessels 2030’, aimed to assess the viability of these low/zero-emission fuels and technologies through the economic lens (i.e. profitability). The report looks at five ship types and several ship sizes, in three different scenarios. It shows that costs at the ‘ship level’ would vary widely between the different fuel and machinery options when compared to a conventional ship of today, for which the study uses the example of a 9,000-TEU containership – see graph below. 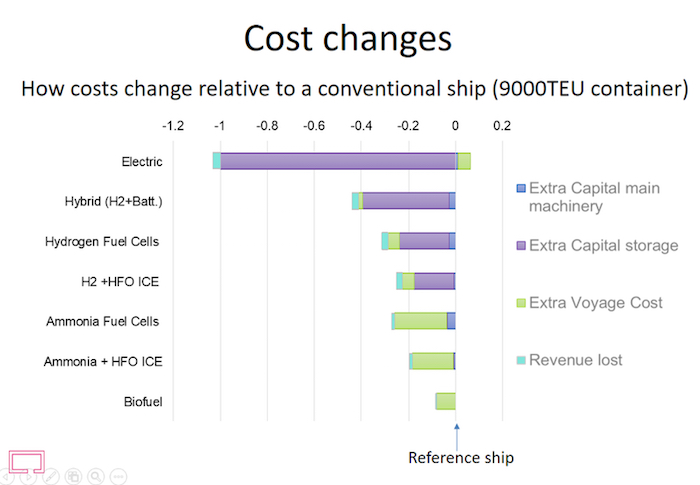 Biofuels appear to be the clear winner (noting the availability and sustainability issues surrounding biofuel supply), the next best options are hydrogen with an internal combustion engine and ammonia with a similar configuration, with the trade-off being around cost of CAPEX (for hydrogen) and OPEX (for ammonia).

At the system-wide level, GloTraM, a techno-economic model, has been used to evaluate future scenarios of the shipping industry to estimate the CO2 emissions from shipping, among other metrics. GloTraM models four scenarios, focusing on the price of renewable energy; availability of bioenergy, fossil fuel price and hydrogen prices (as in ISWG GHG 3/3).

In the scenario with a low renewable price (e.g. in the case of hydrogen, where hydrogen production is cheap), the Marginal Abatement Cost Curve (MACC), a graphical depiction of what the carbon price might be to achieve certain levels of CO2 reduction, shows that by 2050 a carbon price of $100/t of CO2 leads to almost 75%-85% reduction in CO2 emissions – see graph below. 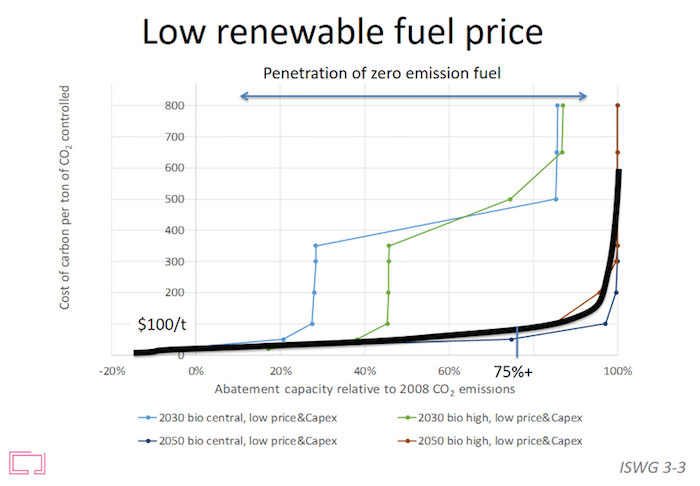 This estimate is not too dissimilar to the findings of an international team led by the well-known economists Stiglitz and Lord Stern. This study suggested that the carbon price for the economy as a whole required to achieve the Paris Agreement temperature goals and using a carbon price to create the economic incentive for change, would need to be between $50-100/t of CO2 in 2030, with expectations that it would continue to rise thereafter.

The analysis shows that the cost of decarbonisation in shipping is also largely a function of the cost of zero-emission fuels.

To give some context, $100/t of CO2 at today’s heavy fuel oil (HFO) prices would add approximately an additional $300/t of HFO, equalling bunker prices that shipping faced during 2008.

We also know that renewable hydrogen prices are rapidly falling. Analysis by the International Energy Agency (IEA) shows the costs are predominantly driven by the cost of renewable electricity. Current projects in Chile, Morocco and the Middle East, for example, are able to secure prices of approximately $25/MWh. At such low prices, the production of renewable hydrogen becomes cheaper than its production using natural gas, and the hydrogen price (per unit of energy) becomes equivalent to present day HFO prices.

We also have evidence (from IEA) that there is significant potential to produce renewable electricity — mainly using solar — in Africa, Latin America, Middle East and Australasia.