The Euro Has the Power to Challenge the Dollar

European Commission President Jean-Claude Juncker isn’t a nationalist populist, but he devoted his State of the European Union address on Wednesday to the defense of “European sovereignty.” This means, among other things, using the euro to challenge the U.S. dollar’s global dominance, particularly in an era of growing American unilateralism.

“The euro must become the face and the instrument of a new, more sovereign Europe,” Juncker said. “It is absurd that Europe pays for 80 percent of its energy import bill — worth 300 billion euro a year — in U.S. dollar when only roughly 2 percent of our energy imports come from the United States. It is absurd that European companies buy European planes in dollars instead of euro.”

Juncker’s complaints about the dollar-denominated contracts are justified. For example, the EU is the biggest importer of crude oil. 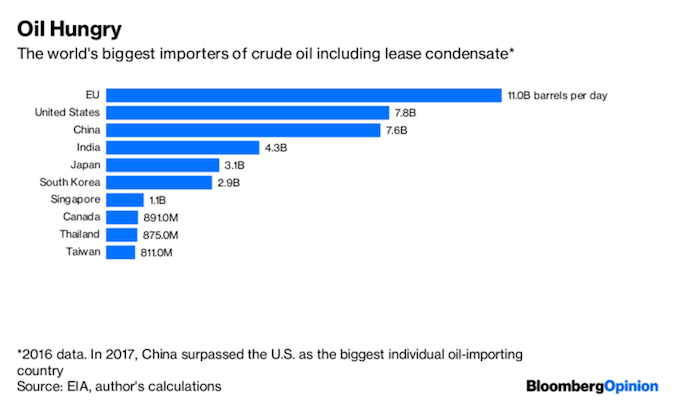 Yet, according to Eurostat, a vast majority of these imports is invoiced in U.S. dollars. 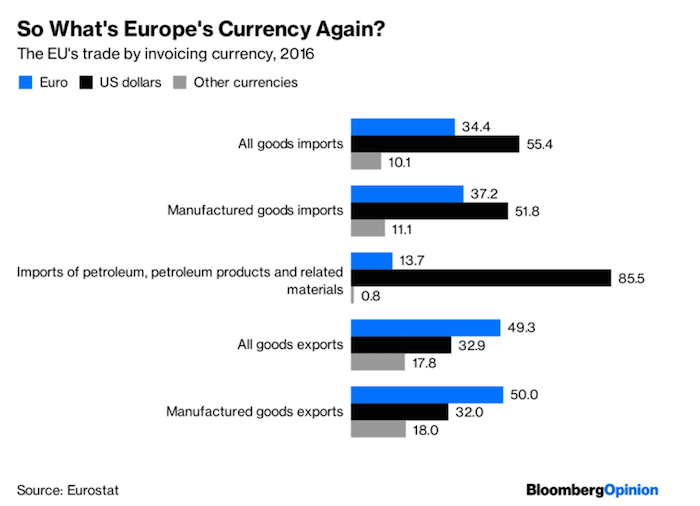 Moreover, half of Europe’s exports are sold in dollars rather than euros. Most of Airbus’s revenue is dollar-denominated, while its costs are incurred mainly in euros, a situation that airplane maker describes as a risk in its financial accounts. The company has even reportedly called on some European suppliers of parts to invoice in dollars.

This makes little sense, given that the euro is the world’s second-biggest reserve currency and, unlike the dollar, its share of global foreign exchange holdings is growing. A European Commission study of invoicing currencies published in 2016 found that even in the oil and aircraft industries, where dollar invoicing is especially prevalent, executives see no regulatory, legal or accounting obstacles to dealing in euros. This isn’t a matter of thin volumes in currency markets, either: Nobody has a problem buying or selling euros as necessary.

Yet many European industries see little reason to switch to euros. In some fields, such as energy and aircraft manufacturing, the dollar stands for business as usual. That’s especially important in the oil industry. Some major producing countries — Saudi Arabia, the United Arab Emirates, Oman and Qatar — have dollar-pegged currencies. Besides, the price benchmarks for crude oil are set on two U.S.-based exchanges — the New York Mercantile Exchange and Intercontinental Exchange.

China has tried to challenge the dollar’s dominance in the oil trade. Earlier this year, it launched yuan-denominated oil futures contracts on the Shanghai International Energy Exchange. But they are relatively thinly traded and more volatile than the dollar contracts, in large part because of the currency risk they involve.

Europe, as a bigger oil buyer than China and the issuer of a far more powerful currency than the yuan, would probably stand a better chance of establishing an alternative to the U.S.-based futures markets. And there’s an additional factor that might help: the geography of Europe’s oil sources.

“Any change from the dominance of the US dollar with respect to the pricing and invoicing of the industry would probably be a political issue in which governments of oil-producing countries had an important say,” the 2016 European Commission report said. About 28 percent of EU oil imports come from Russia, which is eager to undermine the dollar’s dominance. Invoicing these supplies in a currency other than the dollar should be feasible, and it would put pressure on other suppliers to shift as well.

Energy isn’t the only area where the euro could challenge the dollar. Collectively, the EU accounts for 15 percent of all international trade in goods, on par with the U.S. and China as a global trade participant. About 93 percent of U.S. trade is invoiced in dollars. If the EU managed to reach that proportion with the euro, it would mean 1.9 trillion euros ($2.2 trillion) a year in additional euro transactions at last year’s trade levels (less without the U.K., but still a mind-boggling amount).

For now, the euro is punching considerably below its weight. According to a European Central Bank report released in July, it has almost caught up to the dollar as a global payment currency, but it’s still far behind in other aspects of global prevalence. 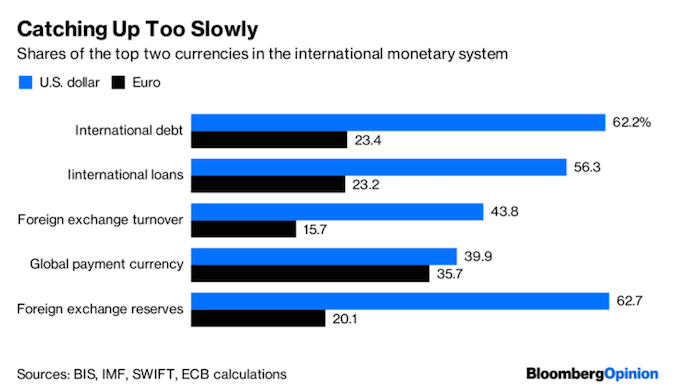 The main reason is inertia. But another major problem is that the EU isn’t seen as a single entity by its global competitors. Juncker understands this. In his speech, he argued that strengthening the euro’s international role requires completing the EU’s economic and monetary union. That task includes common economic policies and budgets, but perhaps a tighter banking and capital markets union would do the job. A common capital market in Europe would have the depth to challenge the U.S. and to establish credible euro-denominated benchmarks.

The July report from the ECB says developing the banking and capital markets union are the two key conditions for increasing the euro’s prevalence.

It’s not impossible to tip the balance in the international monetary system away from the dollar, and it would be easier for the EU than for China, which is starting in a less advantageous position and is fearful of liberalizing its financial markets. European leaders concerned about President Donald Trump’s erratic behavior and the dangers of continued American dominance should listen to Juncker and the ECB and work on realizing the euro’s full potential.
Source: Bloomberg