On 23 May, ECSA’s Maritime Security Working Group met with the EU NAVFOR Somalia Operation Atalanta at their operation headquarters in Rota, Spain.

Representing the European shipping industry, the ECSA delegation met with the EU NAVFOR’s team to discuss the current state of piracy off the coast of Somalia. The delegation also visited the naval assets participating in Operation Atalanta. For the past ten years, EU NAVFOR has deterred and prevented acts of piracy and armed robbery off the coast of Somalia, protected vessels of the World Food Programme (WFP) and African Union Mission Somalia (AMISOM), and monitored acts of illegal fishing. 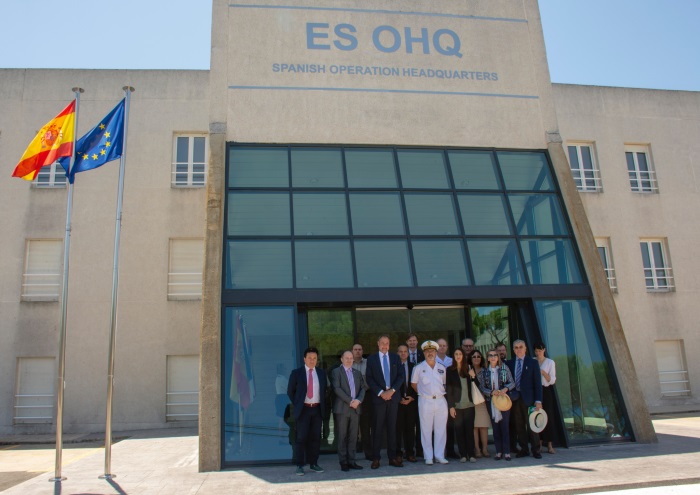 Meeting reiterates: threat of piracy not eradicated off the Horn of Africa.

While it is true that today the number of attacks is minimal, this is only a result of the industry’s implementation of Best Management Practices along with the combined action of different actors and organisations, notably the states in the region.

“We know for a fact that pirate networks maintain the intent, the means and the capability to deploy and attack merchant vessels,” said R. Adm. Antonio Martorell Lacave. “It is up to us – military operations, coalitions and regional states – to uphold deterrence, operate in a flexible and agile manner and keep the seas safe.”

“Operation Atalanta has been a key element in the decrease of piracy attacks,” Flemming Dahl Jensen ECSA’s Maritime Security Working Group Chair mentioned. “We need to ensure there are sufficient resources allocated to guarantee its successful continuation.”

EU NAVFOR remains committed to deterring, preventing and suppressing piracy and emphasizes that the Maritime Industry must continue to adhere to BMP measures in order to maximize the safety of the ships and crews whilst transiting the high-risk area.

The European shipowners expressed their support to EU NAVFOR Operation Atalanta and their close cooperation with other international actors. The shipping industry will continue to cooperate with the EU NAVFOR team to ensure that Somali-based piracy stays suppressed.
Source: ECSA