The Fed’s tentative steps to tapering

Progress… just not enough
The July FOMC statement was notable for its acknowledgement that “progress has been made” towards achieving the Federal Reserve’s maximum employment and price stability goals. At the time we wrote that “this is a significant step in the policy normalisation process”, but of course it isn’t “substantial further progress” that the Fed wants before policy action will be triggered and that was reinforced within the minutes to the FOMC meeting.

On the economy Fed members noted the firmer economic activity with growth “expected to remain strong over the second half of the year”, but they recognised that “supply disruptions and labour shortages are likely to persist over the second half of the year”. At the time the jobs story wasn’t consistent with the “substantial progress” they want to see with some evidence of recovery being “uneven” across sectors, demographics and income groups while there was still a sense that inflation would largely be “transitory”.

As for risks to the outlook there was clear concern about slowing vaccination rates and the rise of the Delta Covid variant across much of the nation potentially impacting the growth story. There was also concern amongst “some participants” that inflation is subject to upside risks from supply disruptions and labour shortages. As usual “elevated valuations across many asset classes” got a mention as a potential threat.

Inching towards action – with caveats
Regarding QE tapering there was a lot of discussion about whether the threat of higher inflation should prompt an earlier tapering or whether the Delta variant of Covid could “damp the recovery” and justify a delay to tapering. “Various participants” suggested a QE reduction would be warranted “in coming months” but “several” others suggested in may be more appropriate “early next year”.

Interestingly there was a characterisation that QE tapering should be emphasised as merely meaning “monetary accommodation would be provided at a slower rate” rather than being assessed as a tightening of conditions that would ultimately lead to a “predetermined course of raising the federal funds rate”. There was a heavy emphasis that the QE decisions is separate from a decision on interest rates so as to not alarm the public who may be unable to “disentangle deliberations”.

So essentially, movement in the right direction, but no imminent announcement and no real decision on how the tapering would take place regards to its composition – “most… saw benefits” from reducing agency MBS and Treasuries proportionally to end at the same time but “several” saw the benefits of focusing on MBS first. This is going to be something for the Jackson Hole conference to hammer out we suspect.

Overtaken by events?
Of course, a lot has happened since the July 28th FOMC decision. The July employment report was very strong with payrolls adding more than a million jobs when revisions are included, the unemployment rate falling and wages picking up. We have also seen more evidence casting doubt of the “transitory” view surrounding inflation with pipeline price pressures still building, corporate pricing power on the rise and inflation expectations looking decidedly less well anchored at 2% than the Fed continues to lead us to believe (see chart below).

On the negative side we have also seen the resurgence of Covid take greater hold and the seventh largest ever drop in the University of Michigan sentiment is an obvious concern for the outlook, at least in the near-term. 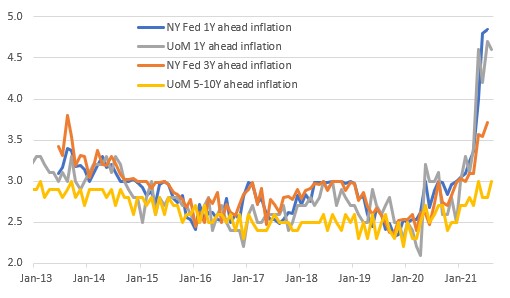 Fed officials increasingly favour earlier action
Just as importantly, the comments from Fed officials have notable swung in favour an earlier and swifter taper since the robust July jobs report. A “dialling back” on the level of support has been a key phrase used by San Francisco Fed Chief Mary Daly, and Esther George at the Kansas Fed with St Louis Fed President James Bullard going as far as saying “it’s not clear to me that we’re really doing anything useful here”.

Eric Rosengren at the Boston Fed agreed saying that “I don’t think the asset purchase program in the middle of labour market shortage and material shortage is necessarily as effective a tool as it was coming out of the financial crisis”. Meanwhile Robert Kaplan at Dallas argued “these [QE] purchases are not well suited to the environment we’re in now … I think the best thing to do is, early, begin weaning off that medication”.

Thomas Barkin at the Richmond Fed suggests they are “closing in” on the taper with several other, including Charles Evans (Chicago) and Raphael Bostic (Atlanta) suggesting another one or possibly two months of decent jobs growth could seal the deal.

Neel Kashkari (Minneapolis), arguable the biggest dove on the committee, is far more reticent to push ahead though and The Fed Governors, including Chair Jerome Powell, are yet to lay their cards on the table. The upcoming key event is next week’s Jackson Hole Conference where Fed officials will gather and reflect and debate the latest news and we will be looking out for his views on the situation in particular.

Fed taper – early and swift
We are tentatively of the view that the Federal Reserve will announce QE tapering at the September FOMC meeting with the slowing of purchases starting in October. Comments from Fed officials suggest it will be fairly swift and most probably conclude in 2Q 2022.

That is, of course, contingent on the resurgence of Covid not leading to a reversal in economic performance. So far, high frequency data is hinting at a topping out based on airport security checks, restaurant bookings and people movement data from the likes of Google’s mobility data. This could make some policymakers more cautious and potentially lead to a delay of a month or two on the taper announcement, but with Covid cases starting to head lower in some of the recently hard hit states such as Arkansas and Missouri we expect any economic softness to be short lived.

There will obviously be a gap before rate hikes, but we remain upbeat on growth and expect employment will be back to pre-pandemic levels next year. Meanwhile, lingering supply chain issues will add to costs in an environment of decent corporate pricing power while higher wages will add an extra impetus that continues to keep inflation well above target. This would allow the Fed to start hiking rates in late 2022.

The Fed gets technical on rates
With respect to the fall in market yields, the Fed notes policy communication, investor positioning and the pandemic as driving factors. There was no particular role noted for the macro economy, or data impact. Rather the Fed preferred to focus on the technical explanation of a fall in the term premium reflecting the above mentioned factors. There was not much more discussion beyond that on why rates are where they are or to what extent they signal anything if at all.

The Fed’ minutes contained some interesting discussion on the Fed’s permanent repo facility. This is a new facility, one that effectively allows the market to generate reserves by posting collateral at the Fed. In simplistic terms it makes bonds equal to cash for eligible counter-parties, which is huge. It’s not relevant for here and now of course, as the market is long reserves and short collateral – hence the USD1trn of excess cash going back to the Fed o/n on a daily basis on the reverse repo facility.

In contrast the permanent repo facility will allow the market to post excess collateral (or just collateral) for cash. This will become more important when the Fed completes its tapering process, and really becomes relevant should the Fed decide to take reserves out of the system by lowering its holdings of bonds (whether slow grind: not re-investing in roll-offs, or fast track: actual bond sales).

There was some discussion around the USD500bn limit to the facility, and whether such a cap was necessary. The was also a counterparty limit set at USD60bn, but there was less discussion on this. There was general support for the facility, although one member would have preferred access to foreign players to be made available during periods of market stress, rather than through a standing facility.

Ultimately the permanent repo facility should help to make for a less spiky market for short-term rates, allowing the Fed more control over the repo market, or in a sense provide the market with the means to control it independently.
Source: ING

2021-08-20
hellenicshippingnews..
Previous: Amid U.S. Afghan debacle, Russia and China know what they are doing
Next: U.S. second-quarter growth likely to be revised higher after slew of strong data