The main bunker fuel for ships is High Sulphur Fuel Oil (HSFO, with sulphur up to 3.5% m/m (mass by mass)). This will all change on 1 January 2020 when the IMO’s regulation to reduce the limit for sulphur content in fuel oil used in ships to 0.5% m/m comes into effect. The reduction to the sulphur content limit is predicted to lead to a massive drop in the consumption of HSFO, which in turn, we surmise will impact the price of piped natural gas in Asia and its competitiveness against LNG.

The International Maritime Organisation (“IMO”) is a specialised agency of the United Nations, responsible for the safety, security and environmental performance of international shipping. The International Convention for the Prevention of Pollution from Ships (“MARPOL”), developed by the IMO, aims to preserve the marine environment by minimising pollution of the oceans and seas. MARPOL Annex VI (Prevention of Air Pollution from Ships), which sets limits on sulphur oxide and nitrogen oxide emissions from ship exhausts and prohibits deliberate emissions of ozone depleting substances was adopted in 1997, entered into force on 19 May 2005 and was revised in October 2008.

On 27 October 2016, the IMO announced that the effective date for the reduction of marine fuel sulphur content under MARPOL Annex VI to 0.50% m/m limit would be 1 January 2020 (hereafter “IMO Sulphur 2020 Limit”).

3) switch from HSFO to a more expensive low sulphur fuel; or

Given these options (HSFO will only continue to be used in options 1 and 4), it is predicted that there will be a significant decline in the consumption of HSFO: ship owners indicate that compliance will be high and that abatement technology is an unattractive option as it is costly and may require the vessel to be taken out of service during its installation. This leaves switching to low sulphur fuels and a growing fleet of LNG-fuelled vessels (new build vessels and vessels gradually converted during periodic dry dock inspections). ICIS estimate that HSFO demand will drop by approximately 170 million tonnes per year in 2020 (see chart below), Platts estimate a drop of 3 million barrels per day in 2020, and IEA estimate a 2 million barrels per day drop in 2020 demand. 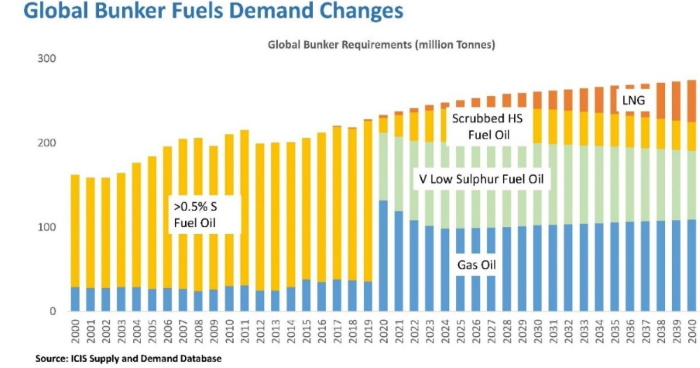 The IMO 2020 Sulphur Limit and its potential impact on demand for HSFO has been known for some time and, globally, many refineries have been upgrading or changing their feedstocks to manage this impact. However, such a huge drop in HSFO demand is expected to impact the price of HSFO in two key ways:

2) increased volatility, at least through 2020 (and possibly longer term), due to lower demand and reduction in supply volumes.

How does the IMO 2020 Sulphur Limit impact the price of piped gas in Asia?

In many parts of the world, the price of pipeline gas is linked to the price of HSFO; whereas gas produced from LNG is more commonly linked to Brent or other crude oil prices. In Asia for example, many of the pipeline gas sales in Thailand are HSFO linked and the pipeline gas sales from Indonesia to Singapore are also HSFO linked. For example, the Singapore Gas Network Code uses 110% of HSFO as the default price a shipper must pay if there is a gas supply imbalance.

However, many of these countries also import LNG. If the price of pipeline gas (HSFO) falls relative to Brent, then pipeline gas will become the more cost competitive option to LNG. Using 24 October 2019 values for gas sold in Singapore as an example:

Applying the Singapore gas network code price formula to the current price of HSFO gives a pipeline gas price $8.13 /mmBtu. Yet if the HSFO were at its more usual differential to Brent of $6/bbl, e.g. $51.2/bbl or $370 /MT, then the Singapore gas price would be $9.92 /mmBtu.

So the relative decline of HSFO prices versus Brent has already made pipeline gas in Singapore more competitive than LNG. Clearly, if the price of HSFO falls further relative to Brent, the price advantage for pipeline gas will be considerable, thus driving up its demand at the expense of LNG supplies.

In the shorter term, we surmise that the impact of the IMO 2020 Sulphur Limit is likely to increase demand for pipeline gas at the expense of LNG, at least in Asia. In the longer term, the reduced demand for HSFO and the expected increase in volatility may: (i) make hedging the pipeline gas price costlier; (ii) make gas supply planning more complicated, e.g. a buyer’s fuel source choice (LNG or pipeline gas) depends on price difference between them, which will become harder to predict; and (iii) result in cessation of published values for HSFO.

Pipeline gas sales agreements occasionally include price review mechanisms to manage the gas prices in changing market circumstances, in which case 2020 may be a year in which they are applied. More often, however, pipeline gas sales agreements typically only include mechanisms to change the price marker used to determine the gas price if the original price marker is no longer published rather than as a result of excessive volatility or lack of underlying liquidity. At what point do these negative effects cause sellers or buyers of pipeline gas to exercise their price review rights or agree that it is time to change their price marker from HSFO to a more liquid price marker? Always a tricky negotiation and one for which expert advice can pay dividends.
Source: King & Spalding