Dennis A. Daggett, who since November is the General Coordinator of the International Dockworkers’ Council (IDC) after the General Assembly that the Global Federation held in Lisbon (Portugal), met a few days ago in the United States the Zone Coordinators and representatives of some of the relevant Unions of the Organization, to present the Council’s Action Plan for the next years.

The Daggett meeting began with a message of gratitude to the delegates present at the General Assembly for their unanimous support for his election, in which he was unable to be present because of family problems. At the meeting, held at ILA Headquarters in New Jersey, were the Zone Coordinators for Oceania/Asia (Paul McAleer), the East and West Coasts of North America (Kenneth Riley and Bobby Olvera Jr., respectively), Latin America and the Caribbean (Cesar Luna) and Africa (Guigrhehi Pierre). The European Zone Coordinator (Anthony Tetard), was unable to attend the meeting due to the port strikes in France, which were strongly supported by those present. Delegates from Coordinadora (Spain), ILA and ILWU (United States), Unite (United Kingdom), Sutap (Argentina) and ACV-Transcom (Belgium) were also in New Jersey. 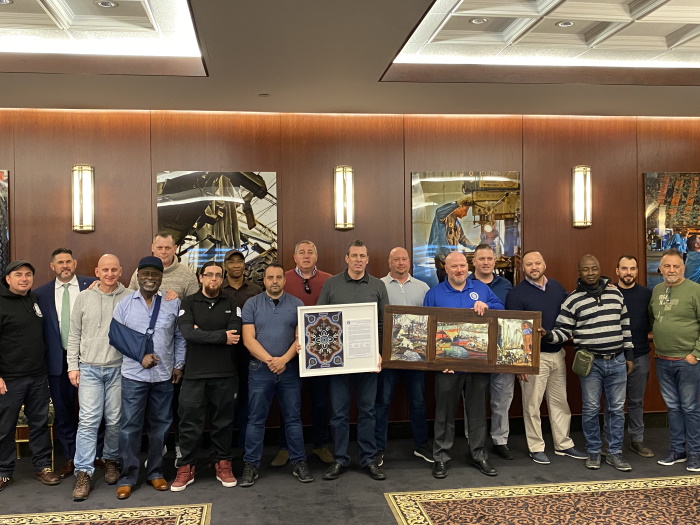 Those present unanimously approved an Action Plan to adapt the IDC to growth, as proposed by Daggett, which aims to manage in a more pragmatic way the great expansion that the Dockers International is having on a global scale. According to the General Coordinator, the current 140,000 affiliated dockworkers (following the entry of the British representation last December) might reach over 200,000 by the end of their mandate and in line with their agenda, thus strengthening the IDC as the leading international Dockers’ Organization.

Therefore, the Secretariat of the International Dockers’ Council will expand its functions, in continuous contact with the Zone Coordinators and with Dennis A. Daggett who will coordinate the actions to be implemented, from the United States, where he is the Executive Vice-President of the International Longshoremen’s Association (ILA).

In this sense, the General Coordinator’s project “looks to adapt the International Dockworkers Council to the extraordinary rate of growth that it has experimented in the last years and that is expected in the future”, according to Daggett, but also to increase its position and relevance before international maritime and port authorities and organizations, large corporations, shipping companies and ship-owners, or shipping and/or cargo lobbies.

It is important to point out that the International Organization has maintained interactions with highly representative Trade Unions in more than a dozen countries, which have shown interest in the defense of the Profession done by the International Dockworkers’ Council and which could become part of the IDC, with the new approved structure. In addition, the New Jersey meeting discussed some of the issues that are most relevant and important for all dockworkers at an international level: the problem of Automation, Health&Safety, and Trade Union participation and representativeness, as well as the commitment to the health of professionals in their jobs.
Source: International Dockworkers Council