The oil market outlook: Lasting scars from the pandemic

After plummeting in April, oil prices have partially rebounded in response to a steep drop in production, particularly among OPEC and its partners. While consumption has risen from its lows in 2020Q2, it remains well below its pre-pandemic level. The pandemic is expected to have a lasting impact on oil consumption, with demand only likely to fully recover by 2023. Oil prices are forecast to rise to $44/bbl in 2021 from a projected $41/bbl in 2020, as the gradual rise in demand coincides with an easing of supply restraint among OPEC+. The main risk to the oil price forecast is the duration of the pandemic, including the risk of an intensifying second wave in the Northern Hemisphere, and the speed at which a vaccine is developed and distributed.

After rebounding from April lows, oil prices stabilized in 2020Q3

After plunging in March and April, crude oil prices saw a robust recovery in May and June, and averaged $42/bbl in 2020Q3. However, they remain almost one-third lower than their 2019 average. 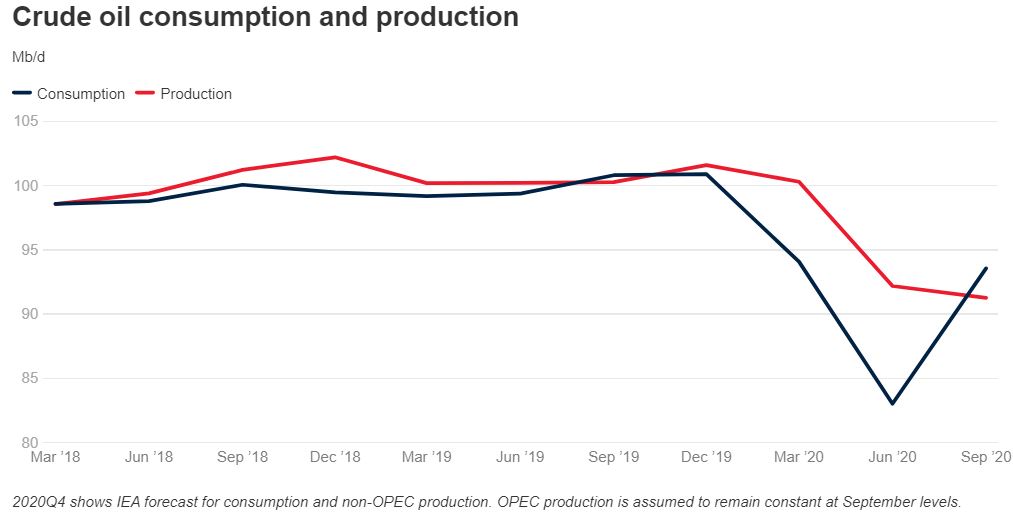 The recovery in prices was driven by a sharp reduction in production, especially by OPEC and its partners, known as OPEC+. The group agreed to cut production by 9.7mb/d, almost 10% of global oil supply. Supply also fell sharply in the United States and Canada. The rise in oil prices was also helped by a recovery in consumption as lockdown measures were eased and travel and transport began to pick up. 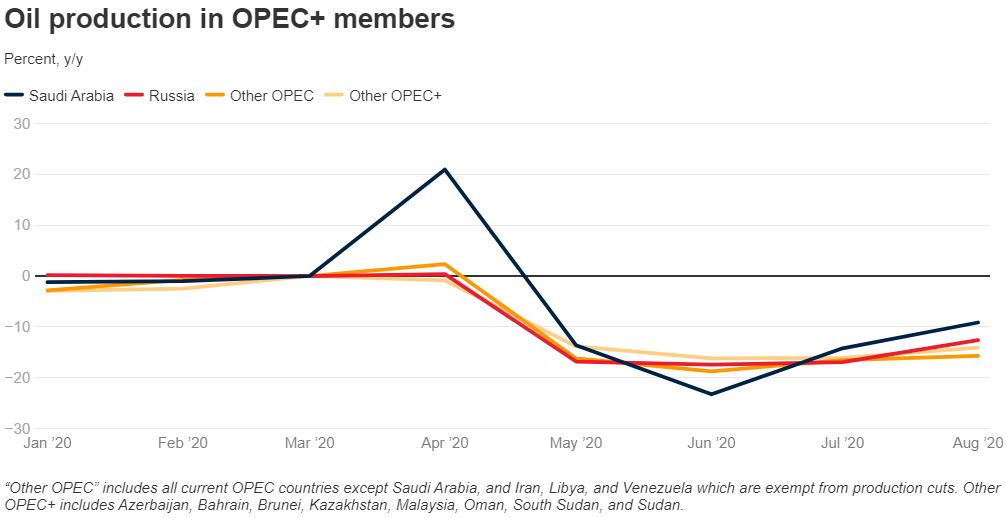 Global oil production plummeted by 12% in May, falling from 100mb/d to 88mb/d, and has remained well below its pre-pandemic level. The fall was driven by OPEC+, which collectively agreed to production cuts of 9.7mb/d. Compliance with the cuts has been high, particularly compared with previous agreements. The group agreed to ease the restraints over two years, and this began in August with increased production of 2mb/d. A further increase of 2mb/d is planned for January 2021, although this increase could be delayed if oil prices do not see a further recovery. One additional factor is production in Libya, which is a member of OPEC but is not subject to the OPEC+ agreement. Libya had seen production fall close to zero in mid-2020 as a result of internal geopolitical conflict, from an average of 1.1mb/d in 2019. However, a nationwide ceasefire was announced in October and a robust recovery in oil production is possible in coming months. 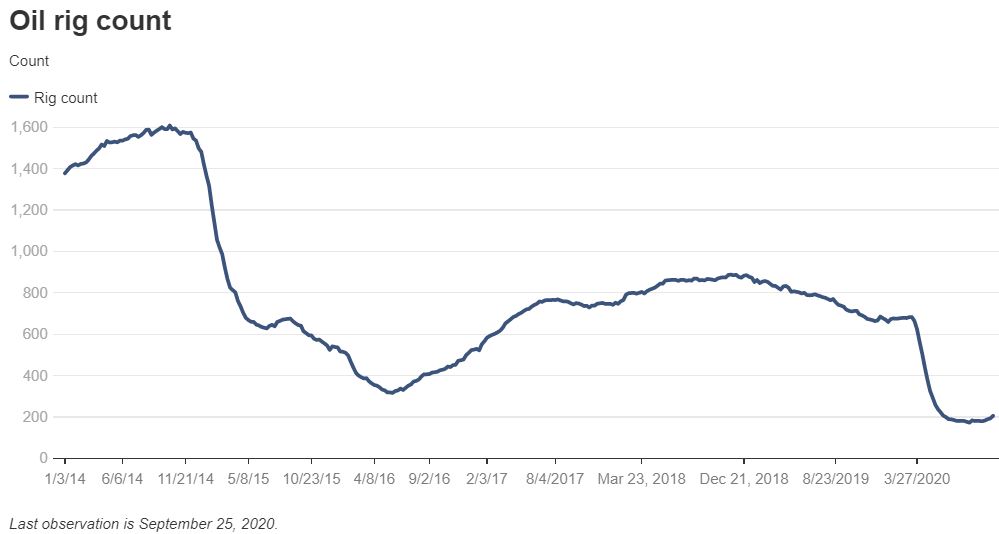 Oil production in the United States dropped by one-fifth in May amid plummeting demand and prices. While output has since recovered, it remains around 10% below its 2019 level. Investment in new oil production in the U.S is also very weak. The oil rig count, a measure of new drilling activity, fell by 75% to reach an all-time low in August, although it has since seen a modest recovery. Survey results from the Federal Reserve Bank of Dallas suggest most U.S. shale companies do not expect a major increase in new drilling until the price of WTI increases above $50/bbl—$10/bbl above its current level. As a result of low levels of new investment, oil production is expected to average nearly 3% lower in 2021 relative to 2020. 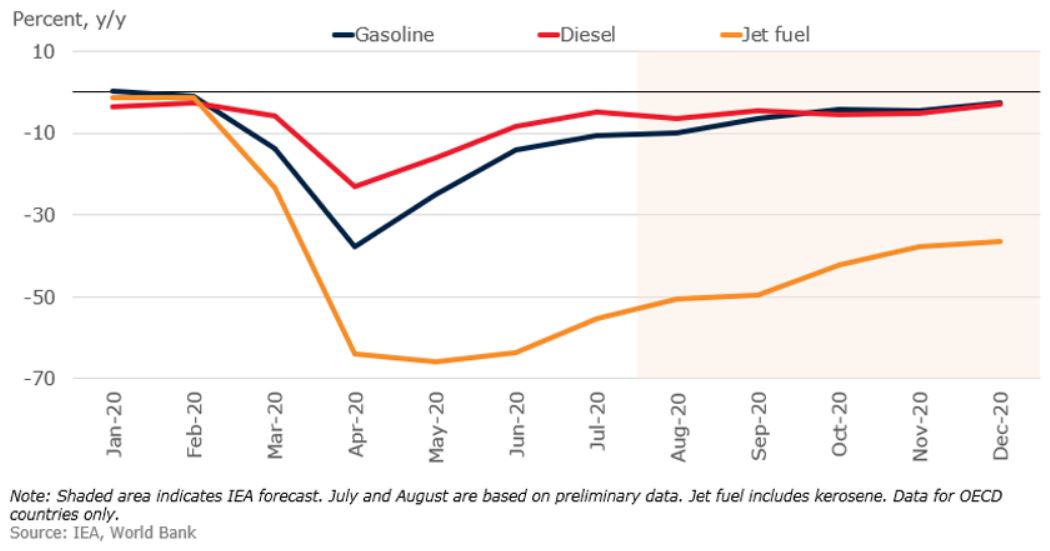 Two-thirds of oil consumption is accounted for by transport. Of the three main transport fuels, jet fuel has been the most affected by the COVID-19 pandemic, given the collapse in air travel. Diesel, in contrast, has been the least affected , as it is used for shipping and road transport of freight, which have been boosted by e-commerce. After reaching a trough in April, gasoline and diesel consumption in OECD countries have seen a recovery in demand and are expected to almost reach pre-pandemic levels by the end of 2020. However, the weakness in jet fuel consumption is expected to be significantly more persistent. 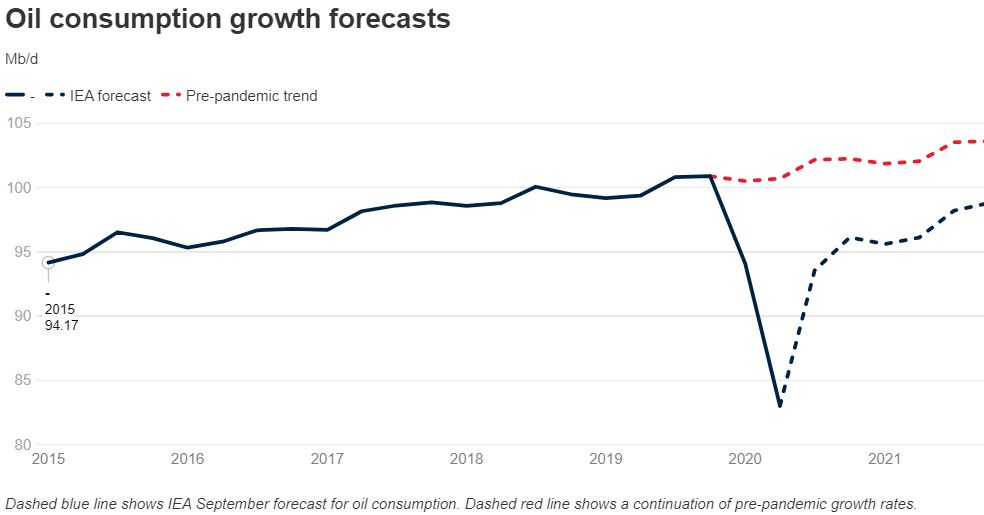 The pandemic is expected to have a lasting impact on oil consumption. Over the next few years, consumption is forecast to remain well below its pre-pandemic trend. In the longer-term, the pandemic is likely to affect oil consumption via a shift in people’s behaviors. Air travel could see a permanent reduction as business travel is curtailed in favor of remote meetings, reducing demand for jet fuel. A shift to working from home may reduce demand for gasoline, but this could be somewhat offset by increased use of private vehicles if people remain averse to using public transport. While the overall impact is difficult to quantify, concerns about future oil demand are already impacting corporate investment decisions. Some industry scenarios indicate that oil demand may have peaked in 2019, and several major oil producing companies have announced changes in long-term strategy, including a significant reduction in investment in new hydrocarbon projects, albeit with long horizons.
Source: World Bank