The polarized struggle among states for ambitious climate policy on shipping

As IMO’s critical meeting on climate change progresses, new research explores how around 25 key nations with a spectrum of positions jostle to influence the outcome. The IMO body responsible for climate policy, the Marine Environment Protection Committee (MEPC) meets in London April 9-13 to finalise its strategy. Crucially it will decide whether there will be binding greenhouse gas targets.

Leading the push for ambitious climate reform are the Marshall Islands, Germany, France, Belgium, the UK and Sweden. Leading the opposition are China and Brazil and the very powerful influencing of Japan and South Korea. Saudi Arabia and Panama are also highly oppositional. The role of the US has potentially moved towards the opposition. It could be a wild card this week and will be watched.

Japan scores as by far the most actively engaged country on climate based on IMO data. It has taken over as MEPC chair from open registry state Panama for the current meeting and the two have a close commercial relationship on shipping and at the IMO. Japan is by far the largest owner of Panama-registered shipping (42%) and Panama is the IMO’s largest funder. Panama registers 18% of the world’s shipping tonnage yet accounts for less than 0.1% of global GDP. Of the eight delegates Panama sent to the key 2017 MEPC meeting it chaired, three were representatives of the company operating its shipping registry, the Panama Maritime Authority, of which Japanese shipping owners appear to be major clients. 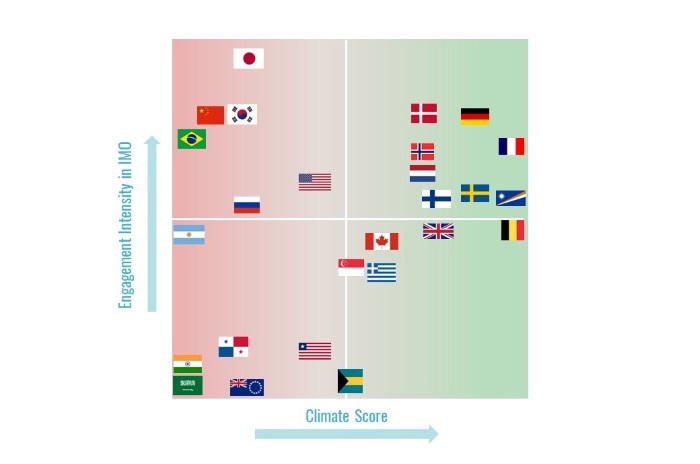 The research also assesses a country’s economic exposure to shipping by aggregating metrics of ships registered and owned and the importance of trade in goods to their economy. Japan and China score highly on this metric with their export-orientated economies and shipping ownership. Brazil however lags with a very low trade-to-GDP ratio and comparatively low shipping ownership.

Brazil’s opposition appears largely driven by corporate vested interests. Mining giant Vale, one of the world’s largest users of bulk shipping dispatched 13 delegates to the IMO’s MEPC meetings between 2015 and 2017, the most for any single company. Denmark also has a low economic interest score. It is, however, home to the most important single private sector player in global shipping Moller-Maersk, a company known for its claims on fleet efficiency. Maersk sent the second highest number (11) of delegates from a single private company to the four meetings.

The IMO’s biggest source of income comes from the so-called open registry states of Panama ($31mn) Liberia ($18mn) and the Marshall Islands ($13mn) over 2013-16. This represents nearly 40% of the IMO’s budget with fees computed based on tonnage of shipping registered. Between them these three have close to 42% of the world’s registered shipping yet contribute less than 0.1% of global GDP.

“This week is really crucial for the credibility of IMO. In Paris, all countries have accepted that they need to reduce their emissions towards net zero in the second half of this century. International shipping was given the opportunity to take comparable obligations on board through IMO. If this week they fail again, countries will have to take their own actions again. No sector is excluded from meeting our climate targets. Bas Eickhout, Member of the European Parliament

“Our data suggests powerful shipping nations like Japan are using their economic influence over open registries such as Panama to push against ambitious climate policy. This power-dynamic raises questions about the IMO’s status as a democratic UN body. Its inaction on climate is clearly a symptom of its inertia and institutional bias towards vested shipping interests. Thomas O’Neill, Research Director, InfluenceMap