The PORT OF KIEL concludes the last year with good results

The PORT OF KIEL achieved a sound result last year. Underpinned by a strong cruise season the number of passengers rose by 8.4 to nearly 2.4 million travellers. The cargo sector achieved an increase of 1.9 % to 6.8 million tons handled on the terminals operated by the PORT OF KIEL. In addition, there is the bulk cargo business at independent facilities so that all in all the 7 million ton mark could be affirmed despite the decommissioning of the local coal power station. Dr Dirk Claus, Managing Director at the PORT OF KIEL: “The port of Kiel was able to pursue its growth course in its core business areas – the ferry traffic and the cruise business sector. At the same time, the focus of our investments lies on the implementation of the BLUE PORT strategy – on the shore power plants and the intermodal traffic, so that the port of Kiel will be climate-neutral by 2030.” About 15 million Euros are currently being invested in the construction of shore power plants so that they will be ready for operation at all three ferry and cruise terminals in the city port in the course of this year. The Color Line ferry has been supplied with shore power at the Norwegenkai Terminal on a daily basis since early summer 2019 and is a forerunner in Kiel. 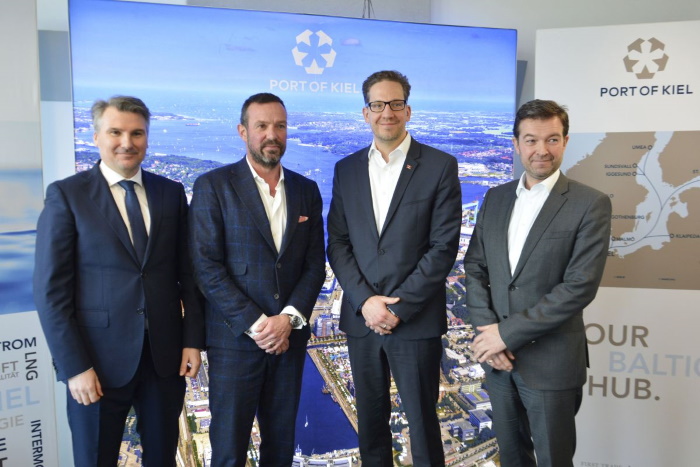 FERRY TRAFFIC CONTRIBUTING MORE AND MORE TO OVERALL TRANSHIPMENT RATE
The core business of the port is the general cargo handled in the ferry traffic sector and with nearly 6 million tons it accounts for 85 % of the overall transhipment activities by now. The biggest volume handled was on the Kiel – Klaipeda (Lithuania) service of the DFDS shipping company once again. For the first time, 2.5 million tons of cargo were transhipped here and the frequency had even been augmented with an eighth weekly departure in autumn. Since April 2019, more trucks destined for Russia have been transported on this route after the weekly ferry service to St. Petersburg had been suspended. Dirk Claus: “The timber import from Russia is executed now with conventional seagoing-vessels and could also be increased.” About 92,500 m³ of Siberian larch were transhipped and put into storage last year.
The company of SCA Logistics GmbH, whose own roro-ferries coming from the Swedish east coast head for the forest product hub of the Ostuferhafen twice a week, had a challenging year by its own account. This came along with a very positive development of the cargo volumes transported either by sea or into the hinterland. At the same time, the company has achieved substantial improvements in its logistical processes and logistical quality; it could further extend and stabilize its supplier and customer base with a long-term perspective and compose a more close-knit logistics network. Jörn Grage, Managing Director at SCA Logistics GmbH: “With a very positive development of the corporation in Sweden, the inauguration of one of the largest pulp mills in the world and the planned expansion of one of our Kraftliner mills to become the largest one in Europe, we look to the future and to the future development of Kiel as a location with high confidence.” 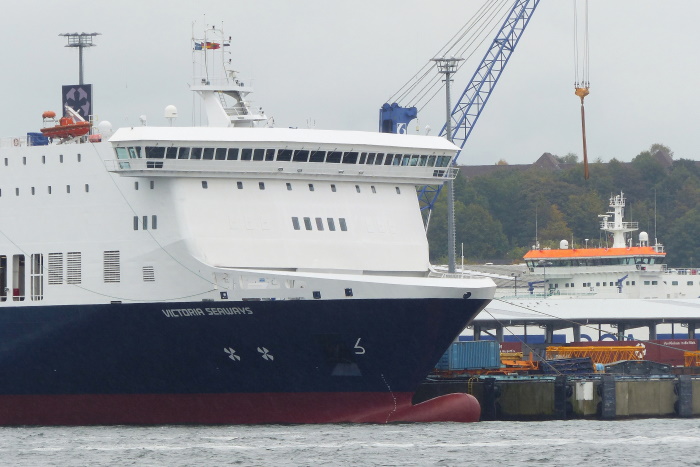 In the ferry traffic sector to Norway resp. West Sweden the service of an additional freight ferry has a positive impact on the route Kiel – Oslo whereas fewer unaccompanied trailers were transported between Kiel and Gothenburg last year. Dirk Claus: “In order to push the ecologically advantageous shift of transport units from the roads to rail and sea, some important infrastructural foundations could be laid last year. The investments by the German Railway at the shunting station Kiel allow for longer trains and new direct connections.” Hence, trains with an overall length of 750 m (55o m before) can now enter the Rbf Kiel-Meimersdorf and a third shunting track is about to be completed at the Schwedenkai Terminal. At this terminal, no less than 25 % of the hinterland transport units are transhipped by rail these days already. After nearly 24,000 load units were transhipped by rail last year this number is expected to increase to well over 32,000 this year. At the end of the year 2019 an additional direct train link to Verona in Italy was set up and next week a new connection to Bettembourg in Luxembourg will be inaugurated, operating from the Schwedenkai Terminal. This direct connection will serve every direction three times a week with 740 m long trains. The PORT OF KIEL expects a transport volume of 8,000 units on this route alone this year.

The PORT OF KIEL is currently investing nearly 30 million Euros in terminal facilities and environmental protection. After the apron in Ostuferhafen was completely redesigned last year in order to optimize logistical processes and to create more space for trucks, trailers and passenger cars, the construction projects now focus on the city port. The construction works at the new terminal building for cruise passengers at the Ostseekai are now in the final phase. The interior construction of the new terminal measuring 3,700 m2 is in full swing while the works on the exterior façade are nearly finished. The 10 million Euro building will be inaugurated in spring with the beginning of the season and thus it is going to further enhance the service quality in Kiel.

However, the largest single investment of the PORT OF KIEL is the shore power supply plant for the Ostseekai and Schwedenkai terminals amounting to 13 million Euros. Construction works at the shore power supply plant started last autumn and the structural as well as the civil engineering is currently in progress. The technical equipment will follow so that the power plant can start test operations still during the season. Dirk Claus: “The shore power plant at the Ostseekai will be the first one to supply power both to a cruise ship and a ferry at the same time. It is our aim to supply shore-side power to 60 to 70 cruise ships during the first full operational year. In the future, 60 % of the energy demand by the ships visiting Kiel is supposed to be met by shore-power from regenerative sources.” 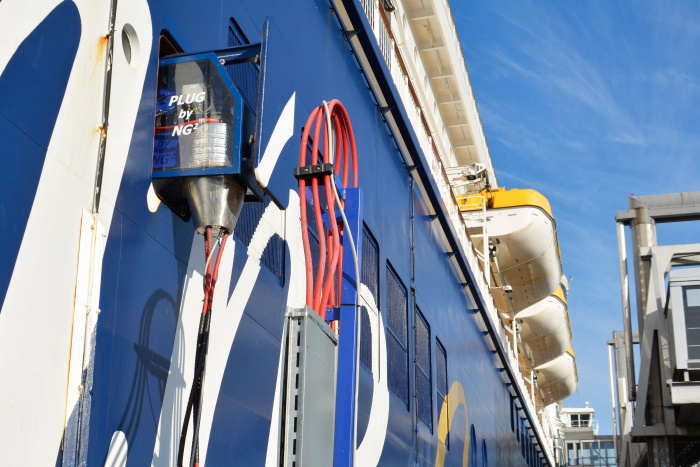 Last year, Kiel was visited on 175 separate occasions (169 in 2018) by 32 different cruise ships with a total gross tonnage of more than 15 million. More than 803,000 cruise passengers boarded or left a cruise ship at the different terminals. Dirk Claus: “For the coming season nearly 200 cruise visits have been registered. Due to the fact that a second MSC cruise ship, the “MSC Splendida”, will be based in Kiel, there will also be passenger turnaround procedures taking place in Ostuferhafen on Sundays.” There are 198 visits by 36 different vessels announced in Kiel to date. Total gross tonnage will increase to nearly 16.7 million and the number of passengers could reach 880,000. The most frequent guests this season will be the ships of AIDA/Costa, TUI Cruises and MSC, with AIDA and TUI Cruises calling at the port with 4 different ships each. The biggest cruise ship of the season will again be the “MSC Meraviglia”, which can be spotted on the fjord as of 2nd May on a regular basis. Dirk Claus: “Kiel is famous for its geographic location, the terminal infrastructure and the easy access by rail. Together with our partners we are working on the expansion of local train and long-distance train connections especially at the weekends.” New visitors to Kiel will be amongst others the “Marella Explorer 2” with mainly English-speaking guests as well as the new expedition cruise liner of Nicko Cruises called “World Voyager”. During the Kiel Week from 20th to 28th June the port expects 21 cruise ship visits, among which will be the “Costa Favolosa” going on 10 cruises starting in Kiel this year. The season will begin on 27th March with a call by the “Viking Star” cruise ship and will be concluded during the advent cruise of the “Albatros” vessel by the Phoenix Seereisen cruise shipping company on 21st December.
Source: Port of Kiel