The prestigious German Design Award 2020 given to Vindskip®

Vindskip®, developed by company Lade AS, Ålesund, Norway, is the winner of the German Design Award 2020 in the category Excellent Product Design – Conceptual Transport.

Organised by the German Design Council and judged by an international jury of experts, it is one of the most renowned design competitions worldwide and enjoys an excellent reputation far beyond circles of experts. The prize will be awarded in Frankfurt on February 7, 2020.

The jury consists of 37 recognized experts from various fields of industry, academia, science and design.
In the jury’s statement, they emphasize on the exceptional and futuristic design of the hull, which also serves as a sail, combining advanced lightweight construction with outstanding aerodynamics and water displacement. An extremely futuristic ship that impresses both formally and functionally. 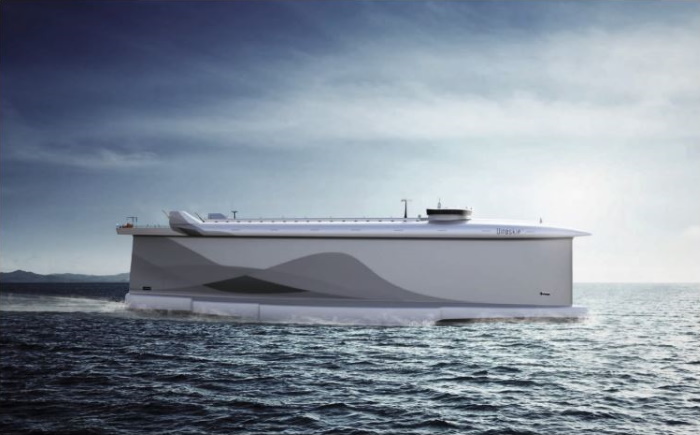 The Vindskip® concept: The novelty of the ship is the design of the hull, with the hull itself acting as a symmetrical wing section. A propulsion power control will keep the required speed, allocating necessary power from the engines automatically. A weather routing module accounts for the innovative approach using the aerodynamic lift generated by the apparent wind as a propulsive force.
STATEMENT OF THE JURY
The exceptional design of the hull – which also serves as a sail – combines advanced lightweight construction with outstanding aerodynamics and water displacement. An extremely futuristic ship that impresses both formally and function- ally. Image: Lade AS

Combining disciplines
With Vindskip®, the founder Terje Lade has combined the discipline of speed sailing and aviation. The goal was to develop a ship that dramatically reduces greenhouse gas emissions compared to a reference ship running on heavy fuel oil.
Instead of fighting against the forces of nature, Vindskip® utilizes wind, currents and waves to the greatest possible extent as a propulsive force.
In addition, the ship has engines running on liquefied natural gas (LNG), which seamlessly contributes to the propulsion of the ship as needed. In this way, the ship can maintain a steady speed and course regardless of weather and wind. LNG can be exchanged with biogas when it becomes commercially available. Solar cells and battery will also contribute to the energy consumption on board.
In addition, a completely new data management system has been developed helping the captain choose the best route at any time, meeting the estimated time of arrival, ETA, with the lowest possible fuel consumption. Thus, the ship can be operated autonomously.

In the development of Vindskip®, Lade AS has worked closely with Norwegian and international companies and research institutions.

Reduction in emissions
The first version of Vindskip® is a car carrier with a capacity of 6,600 passenger cars.
The objective is to offer the lowest emissions for sea transport available in the deep-sea car carrier segment. To be measured in emission per car per transported 1000 km.
The electrification trend is already enveloping the automotive industry. The idea is to offer the car manufacturers the most environmentally friendly transport of electric cars across the Atlantic, with nine round trips between Europe, the US and Mexico a year.
While NOx emissions are greatly reduced and SOx emission are almost zero, Vindskip® are saving emissions with 16,000 tonnes of CO2 per year, compared to a reference ship.
An average fossil car with average annual mileage and emissions has to drive for 10,800 years to produce as much CO2 as Vindskip® is saving per year.
When biogas becomes commercially available, annual savings per ships will be approx. 30,000 tonnes of CO2.
Vindskip® meets all current and future requirements for international shipping on emissions reductions (MARPOL Appendix VI)

A green showcase
When the first Vindskip® is being built, it will become a green showcase. And could mean the beginning of a new era in the transportation of environmentally friendly cars overseas.

The concept can also be used for other types of ships, such as large passenger ferries, cruise ships, ro-ro ships, etc.