The questions to weigh before ordering a newbuilding tanker

Placing a newbuilding order is a complex enough procedure on its own merit, given the fact that a ship owner has to accurately predict the market a few years down the line. But in today’s business environment, these decisions have additional layers of complexity, after the latest regulatory regulations on reducing shipping emissions. In its latest weekly report, shipbroker Gibson said that “ordering a new tanker is undoubtedly a big decision. More often than not the investment is driven by robust industry earnings, although at times the main reason is attractive asset prices, regulatory developments and/or the need for replacement tonnage. As the vessel’s trading life is typically around twenty years, the decision to order should also be considered against the backdrop of projected developments in tanker demand both in the short and in long term. Factors such as slowing growth in world oil demand and environmental concerns should also be taken into account”. 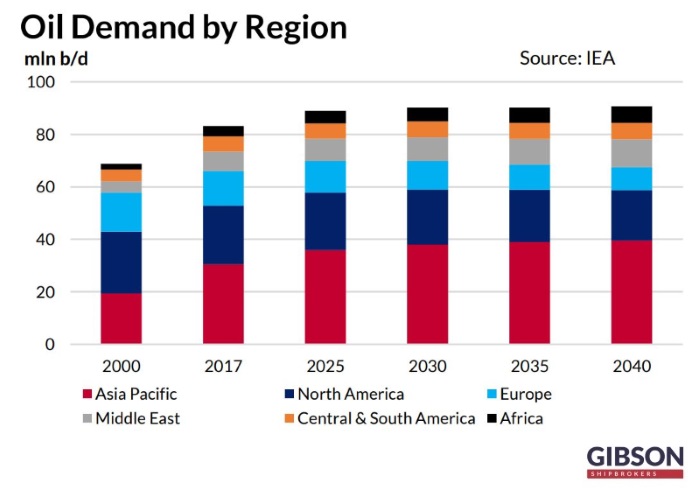 According to Gibson, “the IEA has recently published its annual long-term energy outlook, offering a view of developments in oil demand and supply through to 2040. In the New Policies Scenario, which is considered by many a baseline forecast, the agency takes into account not only the current policies but also ambitions, including those set out in Paris agreement, together with the likely evolution of known technologies. Here, global oil demand is projected to increase by around 1 million b/d per year to 2025, slowing notably thereafter to around 0.25 million b/d. The expectations are for robust growth in demand from the petrochemical sector, trucks and the aviation sector; while oil usage in cars is expected to peak around 2025, declining afterwards as the uptake of electric cars accelerates globally. Gains in global demand will entirely be coming from developing economies, largely Asia and the Middle East. China is anticipated to overtake US as the largest oil consumer, importing over 13 million b/d of by 2040. Strong increases are also seen in India and the Middle East, with consumption in both regions rising above the EU needs around 2030”.

The London-based shipbroker added that “in terms of supply, production in North America is forecast to increase substantially to 2025 and then plateau around 2030. Thereafter, output is expected to ease back; yet, an even bigger decline is projected in regional oil demand, meaning that exports out of the region will continue to rise. In Central/South America oil supply is projected to increase consistently throughout the forecast period, with likely strong increases in net exports between 2025 and 2040. As most of the demand growth is coming from Asia, this suggests ongoing growth in long-haul trade out of the Americas”. 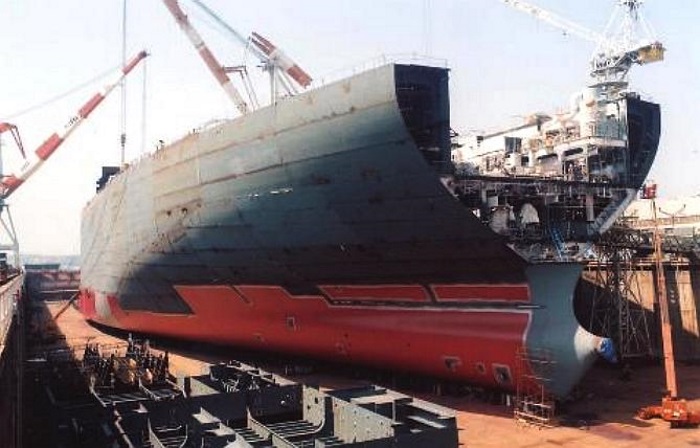 Meanwhile, “when it comes to the refining sector, the IEA expects around 17 million b/d of new refining capacity to come online, almost entirely in Asia Pacific and the Middle East. As new plants are more competitive, the bulk of global refining throughput is projected to shift from the Atlantic Basin to East of Suez towards the end of the outlook period, focusing on growing integration with the petrochemical sector. Less competitive refining capacity in Europe, North America, Russia, Japan, Korea and China could be under threat. From the product tanker market perspective, the potential closure of inefficient and aging refineries in the West highlights the potential for growing regional product imbalances and hence rising product tanker demand”, Gisbon said. 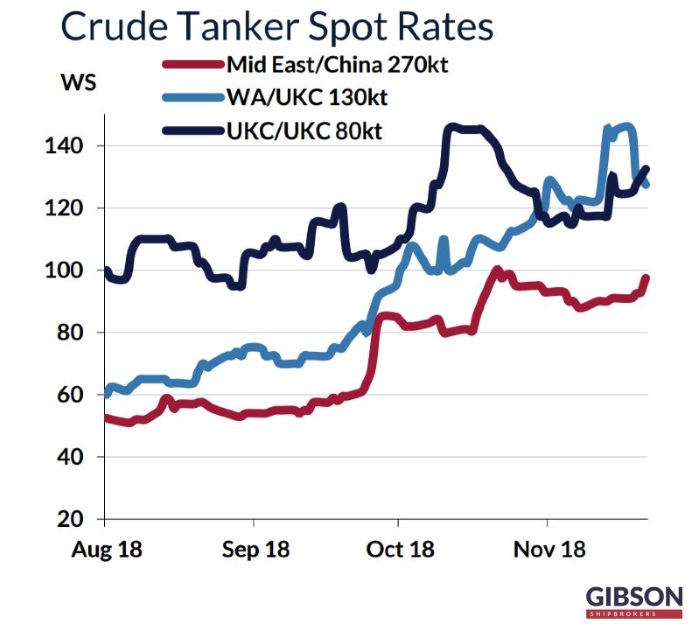 Concluding its analysis, Gibson noted that “on the face of it, the IEA base case outlook remains positive for tankers, particularly for larger units. Oil demand is not expected to peak until 2040, although a notable deceleration in growth rates in the very long term reduces the ability to quickly absorb excess tanker capacity during the industry down cycles. Apart from trade demand prospects, shipowners should also be mindful of the IMO targets to reduce greenhouse emissions by at least 50% by 2050. Although measures to achieve these targets are yet to be defined, there is clearly a growing possibility that further regulations will be forthcoming, with potential major consequences for the global shipping fleet”.
Nikos Roussanoglou, Hellenic Shipping News Worldwide