Home / Shipping News / Port News / The railway already takes more than 160,000 lorries off the road in the València-Madrid corridor

The railway already takes more than 160,000 lorries off the road in the València-Madrid corridor

The railway already takes out of the race 160,000 lorries a year with containers (calculated in TEUs, or units equivalent to 6.1-metre containers) that make the journey between the Port of Valencia and Madrid. A commitment to the use of the train from the Valenciaport facilities that will be reinforced by the rail motorway that will link the port area with the Spanish capital.

The president of the Port Authority of Valencia (PAV), Aurelio Martínez, has valued the signing of the protocol that he signed yesterday with the president of the Administrator of Railway Infrastructures (ADIF), María Luisa Domínguez, and the president of the company TRAMESA, José Ramón Álvarez. “The Port of Valencia has been making a commitment for many years to move part of its cargo by rail, especially with Madrid. Now, 160,000 containers are taken off the road to be transported by rail to Madrid, which accounts for 80% of this traffic in the Port of Valencia”, explained Aurelio Martínez, who continued that “from the PAV we wanted to take a leap forward to transport lorry platforms, especially for ro-ro traffic, as it gives a lot of flexibility, reduces energy consumption and environmental impact”.

“Yesterday – indicated the president of the PAV – we signed the first rail motorway in Iberian gauge, which is an additional boost to this type of traffic. An agreement that includes new rolling stock and loading and unloading points in Valencia and Madrid. An infrastructure that will carry special wagons that will allow a crane to pick up the entire platform, lift it and place it in a wagon adapted to lorries”. Along these lines, Martínez explained that with this agreement, the parties are going to work on “adapting all the infrastructures to make them viable, such as in our railway terminal, where a gantry crane will have to be installed to load and unload these platforms”.

Aurelio Martínez expressed his views on the rail motorway during a meeting with a hundred businessmen from the Valencia Chamber of Commerce’s business club, who toured the port facilities to see first-hand how the Port of Valencia operates. Specifically, they visited by boat the terminals of the South dock and the north extension that was executed in 2012.

During the visit, the president of the Valencia Chamber of Commerce, José Vicente Morata, stressed that “having a direct rail link between Madrid and Valencia where the platform can be raised is necessary to increase the volume of the train. We need logistical solutions to reduce times, to be more competitive and sustainable. Having port and rail infrastructures are key to the competitiveness of companies, but also to create jobs, attract investment and improve the quality of life”.

For his part, the president of Unión Gremial, Juan Motilla, indicated that “we must support this open window to the Mediterranean and international trade, especially thinking about the companies that can take advantage of this infrastructure for the entry and exit of goods”.

More use of the railway

In the first half of the year, a total of 2,089 trains -a monthly average of 356- have entered/left the docks of the Port of Valencia. By rail as an intermodal means, 982,165 tonnes and 103,926 containers have been moved, in both cases, 6% more than in the same period of 2020. Madrid is the main point of origin/destination of rail traffic in the Port of Valencia, with 80% of total rail transport.

This rail motorway, which will link Spain’s main container port with the capital, will increase the share of rail transport and intermodality, making the most of the available rail and port assets and offering quality infrastructures that meet the needs of the transport and logistics sector. This rail motorway will help reduce the environmental impact of the Madrid-València freight corridor, which is heavily used by road, reduce energy consumption and improve road safety. A particularly relevant service for ro-ro traffic (trade of goods by ship that is loaded and unloaded with its own wheels like lorries or any other type of motor vehicle) that use the motorways of the sea that link the Port of Valencia with, for example, Italian or Balearic ports, so that the start-up of this rail motorway will enable these cargoes by train to be extended by a further 350 kilometres.

The trains that will operate this rail motorway will run between the East Dock Quay of the Port of Valencia and the intermodal terminals of ADIF Madrid-Abroñigal and Vicálvaro-Mercancías. Given the estimated deadlines for the availability of specialised wagons, it is expected to be ready to start the rail motorway transport service on the Valencia-Madrid corridor by the second quarter of 2023.

This protocol also contemplates the extension of this corridor for traffic with origin and destination the Port of Sagunto and the Entroncamento terminal (Portugal) via Fuentes de Oñoro or Badajoz, in the latter route with the intervention of the Portuguese infrastructure administrator. 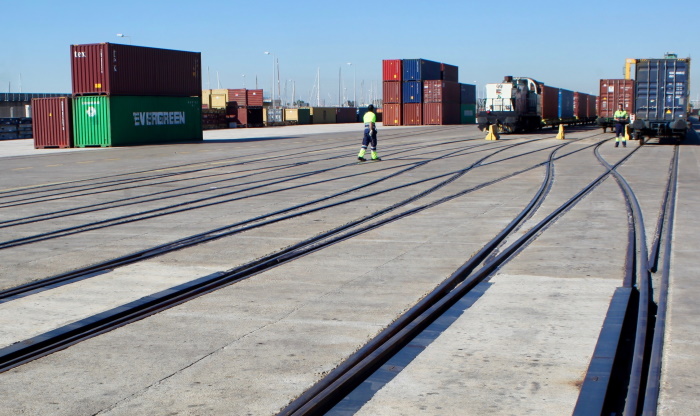 The railway, a strategic objective

The PAV’s objective for the coming years is to continue increasing the use of trains in freight traffic arriving and departing from Valenciaport, hence the importance of undertaking the necessary actions to adapt railway accessibility. Thus, the APV is making investments to take advantage of the synergy between maritime and rail transport to promote competitiveness and contribute to the reduction of CO2 emissions.

Specifically, for the coming years, investments of around 240 million euros are planned to promote accessibility and improve Valenciaport’s rail network. These actions are destined to the remodelling of the railway network in the Port of Valencia, the electrification of tracks, the adaptation of the network to the European gauge, the railway access to the Port of Sagunto or the improvement of the Valencia-Teruel-Zaragoza line, among others.

In the first seven months of the year, 7,399,529 tonnes of ro-ro traffic goods have been moved through the docks of Valenciaport, which represents an increase of 14.36% compared to the same period the previous year. 53% of these goods correspond to national traffic, 27% to exports and 20% to imports.
Source: Port of Valencia