The Rise in Bunker Prices Has Come to a Halt & the Question now is ‘What Happens Next?

In all our previous notes and podcasts we have been relatively bullish on bunker prices rising from their extreme lows at end April, even though at some stages there was a stuttering in the upward trend. The sentiment was driven by tightening oil fundamentals; demand began to rebound and OPEC+ made major cuts to oil production. But these signals have taken a turn. In our Integr8 podcast 3 weeks ago we did take a more nervous approach to any further short term rises in price, but bunker prices have taken more of a hit and have dropped $40/ton (for VLSFO in Singapore) in the past 14 days. 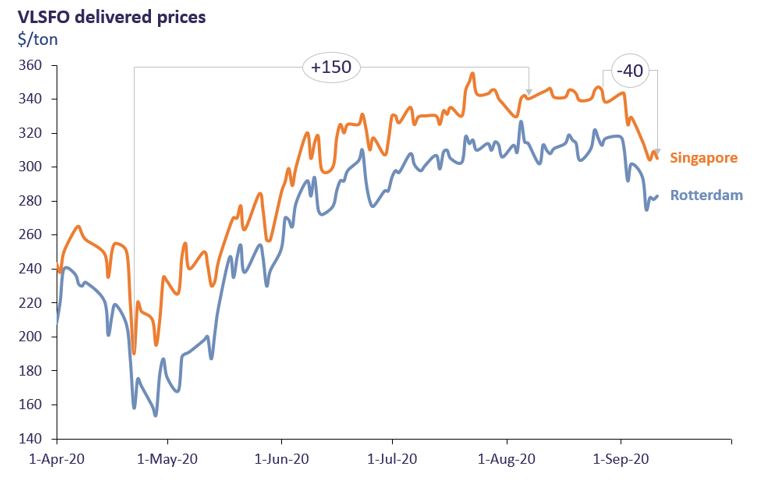 Looking at oil fundamentals at the moment, there are far fewer concerns about oil supply, with the OPEC+ countries producing at close to the agreed levels; it is much more about demand now. The reversal in crude prices has come from a far greater concern about the ‘rebound’ in total oil demand, with the emerging threat of a second covid-19 wave and the associated lockdowns taking place.

Since mid-May VLSFO prices have closely tracked the price movements in Brent futures, with Singapore prices very close to 102% of the Brent price throughout the period (on a weight basis). So, as the crude price has moved up or down, this has led VLSFO up or down by a similar amount. 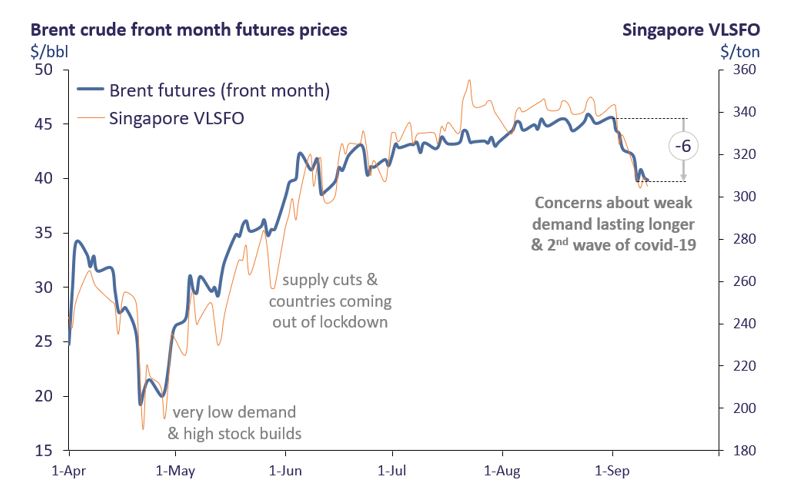 Although VLSFO prices have closely tracked movements in the Brent price for the past 4 months, this is not the case for HSFO. The price of HSFO has strengthened considerably against crude (and so VLSFO), going from 66% of the Brent price in early May to 84% currently. The drivers here are that demand for HSFO has been relatively flat and one of the least affected products from covid-19, and at the same time refinery runs have fallen and the OPEC+ production cuts have focused on heavier, higher sulphur crude grades; all this has led to a ‘constrained’ supply of high sulphur fuel oil. 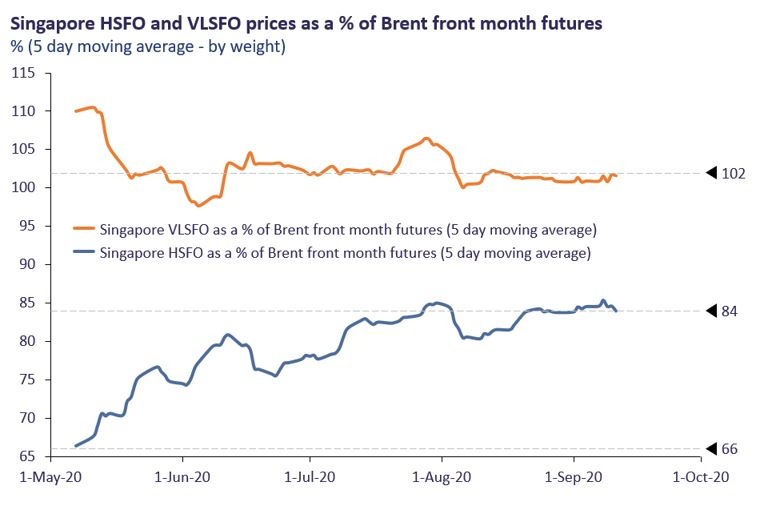 Between early May and now the price of HSFO in Singapore has risen by around $100/ton, with $55/ton of this accounted for by the underlying rise in crude prices, but a further $45/ton gain because of the relative strength in HSFO. It is these dynamics that have squeezed the VLSFO/HSFO differential over the past 3½ months.

The very recent drop in oil prices reflects the changing perspective of how fast oil demand can recover and how long the covid-19 impact could last. Over the past few months most analysts have downgraded their views on future oil demand, with for instance demand estimates for the third and fourth quarters this year reduced by 1.6-1.8 million b/d since July. Also, expectations for next year are relatively flat and 1 million b/d below levels projected in July. The current demand position is ‘the rapid rebound has come to an end and any future increase will be far more muted’. Hence, the drop in oil prices over the past 2 weeks. 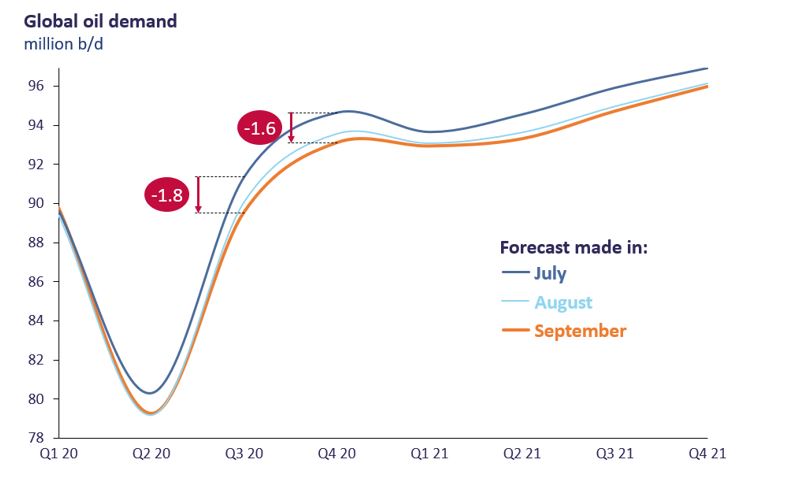 Looking at different oil products, it is clear the demand impact on the bunker market has been far less than for other sectors. In the graph below the orange line represents the change in total fuel oil demand on a monthly basis vs the corresponding month in 2019. This shows fuel oil demand running at around 0.5 million b/d below 2019 levels throughout this year and next year. 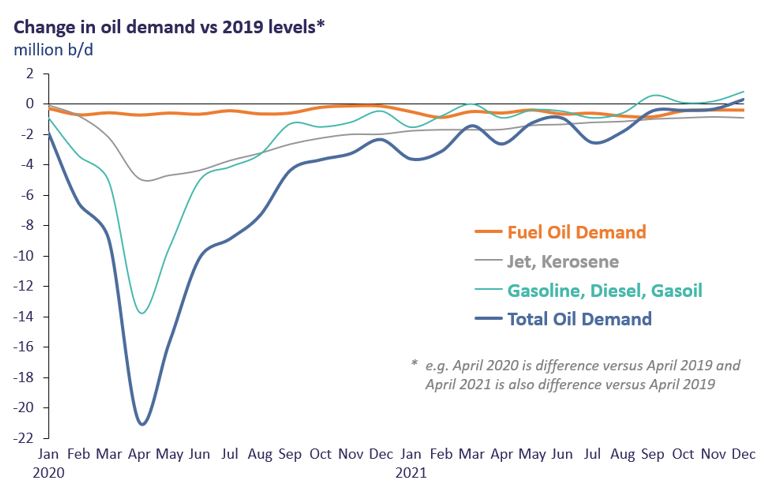 In contrast jet/kerosene demand collapsed in April and even by the end of next year is still expected to be below 2019 levels (the airline industry is looking at 2024 to stand a chance of getting back to earlier demand). It is then the road transportation sector where the biggest swings in absolute demand are taking place. Gasoline, diesel, gasoil has accounted for the biggest part of the demand loss and the biggest rebound since April. However, only minor gains are forecast between now and the end of 2021. The possible second covid-19 wave is hanging heavily over this and economies generally.

Putting all these demand developments together, total oil demand is not expected to get above 2019 levels until the end of next year, or possibly into 2022. Hence the bearish sentiment in today’s market.

In past notes, we have looked at changes in US oil stocks as an early indicator of how well oil demand is doing. This will remain an influence, but low refinery margins and higher covid-19 infection rates and lockdowns have had a bigger (negative) impact.

It could be the case that prices fluctuate around recent levels, but for the next major leap upwards in price there has to be the sign and confidence of a successful covid-19 vaccine. Mixed into the recent news was a halt in one of the key, advanced, vaccine trials (which is typical for such trials) and this has been taken as a bearish signal in the oil markets.

So, in addition to all the other oil indicators we have highlighted before, we must add pharmaceutical developments to the list. There are close to 200 covid-19 vaccine trials currently underway and 9 of these are in their final phase large-scale trial before possible approval. Some analysts are suggesting Q1 next year as a potential time-frame for a vaccine to hit the market. This may be the case, but this is an area where those carrying out the clinical trials and those in a position to approve (or not) a vaccine are far better placed to know than the rest of us.

As before, headline news on US oil stocks, refinery margins and US/China/Russia/Saudi Arabia politics will all steer oil prices, but the current signal for any big hike in bunker prices (and oil prices generally) is likely to be the emergence of a covid-19 vaccine.
Source: Integr8 Fuels

Previous: LNG tanker queues develop on USGC as exporters ramp up production
Next: Tanker Market On the Back Foot in August