The rising hurdles for investment in upstream

How will the oil and gas industry spend its new-found cash flow? Early Q1 company results confirm our prediction that 2021 could prove to be a record year for free cash flow. All the indications are that companies are still fixating on capital discipline, using any surplus cash to pay down debt or buy back shares.

If and when the mood changes, there’s a sizeable pool of investment options in conventional oil and gas. But to progress in the current environment, these projects will have to meet both tough economic hurdle rates and increasing scrutiny against emissions reduction targets. Rob Morris, Principal Analyst Upstream Research team, shared his thoughts on the prospects for FIDs.

First, there’s a logjam of projects that could achieve FID in the next two or three years. If all were to go ahead, it would reverse the downward trend in global upstream investment, which sank to a 15-year low of US$350 billion in 2020. Collectively, the new projects would boost investment by 20% and deliver 14 million boe/d of oil and gas production late this decade – adding almost 10% to global oil and gas supply.

We’ve zoomed in on the 26 conventional projects that could be FID’d in 2021, including three that are already sanctioned. This year is a good time to sanction new projects – costs are at the bottom of the cycle following last year’s last decades-long low in FIDs.

The 2021 batch of projects holds a total of 27 billion boe of reserves and will need investment of US$110 billion. It’s a diverse suite, with LNG (including Qatar’s recently sanctioned North Field East Project) the biggest resource theme by a distance, with over half of the reserves. Deepwater projects account for another 10%, conventional onshore and shelf make up most of the rest and there’s one sour gas project.

The high weighting of gas is an unfolding trend. Shell and Eni are already suggesting that the share of gas in their portfolios will increase in future, and we expect more companies to move in that direction.

Second, the economics look attractive. Returns average 15%, fractionally below last year’s crop of pre-FID projects but above the run rate since 2015. That’s some achievement on a Brent price of US$50/bbl, well below the price we assumed prior to 2020. The industry has driven down costs to achieve these returns. Capital costs average just US$5/boe; while improvements in project execution – managing costs and time to first production – have also contributed significantly.

The average return, though, masks a wide divergence across different types of projects. The highest IRRs are made on short-cycle projects, which are mostly small oil fields that pay back within four years. A few bigger deepwater oil projects in Brazil and Gulf of Mexico generate attractive returns and payback in under 10 years. The six large-scale LNG projects (which include backfill and brownfield investments) that dominate reserves are capital-intensive with paybacks of 10 to 15 years. If LNG prices continue to track oil, returns for these barely scrape into double-digits and drag the peer group average down.

Third, carbon emissions and carbon intensity are now key metrics in any FID decision. The average emissions intensity for the 26 projects is just over 40 kgCO2e/boe, about one-third higher than the average for fields already in production globally. The high emissions associated with liquefying gas is the main factor.

Buyers increasingly want carbon-neutral LNG and developers are starting to address the problem. Santos (Barossa/Caldita) and Qatar Petroleum (North Field East) plan to build carbon capture and storage facilities in parallel to their projects, though that will add to development costs. Low Scope 1 and 2 emissions are quickly becoming a competitive advantage for LNG projects.

Fourth, a host of other factors stand in the way of the projects getting the green light. The external environment is one, with Covid-19 still hampering the recovery in oil demand. The energy transition and climate goals are also influencing decision-making. Most companies now price in carbon to their economic screening; while BP and Shell are among those which have imposed time limits on payback for new projects.

Pre-FID projects now compete for capital with renewables and other low-carbon investments. Some Euro Majors have ring-fenced renewables investment and will be forced to cut E&P spend if prices retreat – a clear indication of the strategic direction. 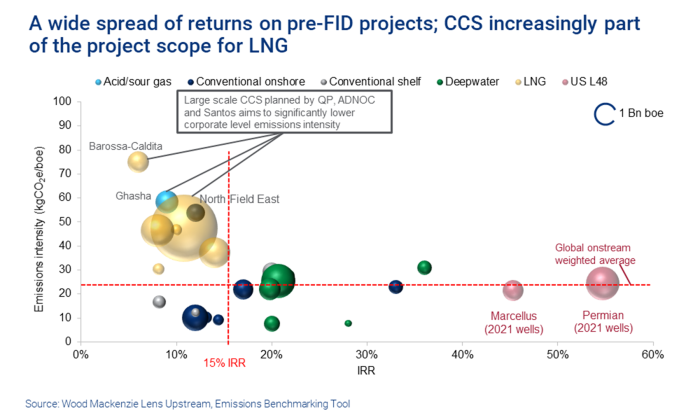 Finally, the big test of capital discipline will come if oil prices stay strong through 2021 and beyond. We see little sign yet that the mood is changing, and it’s a new thing for the industry to generate surplus cash flow but lack the appetite to invest. But the longer investment stays low, the higher the risk of tighter supply later this decade and higher prices.
Source: Wood Mackenzie