The U.S. exported 2 million barrels per day of crude oil in 2018 to 42 destinations

In 2018, U.S. exports of crude oil rose to 2.0 million barrels per day (b/d), nearly double the 1.2 million b/d rate in 2017. Export volumes by destination changed significantly during the year, as U.S. crude oil exports to China fell and exports to other destinations such as South Korea, Taiwan, and Canada increased. 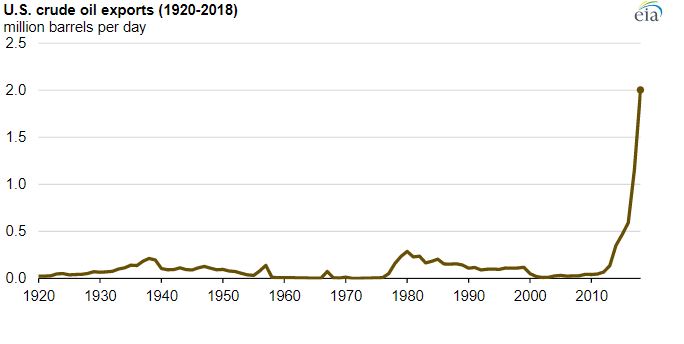 In early 2018, the Louisiana Offshore Oil Port (LOOP) in the Gulf of Mexico was modified to enable the loading of vessels for crude oil exports. LOOP is currently the only U.S. facility capable of accommodating fully loaded Very Large Crude Carriers (VLCC), vessels capable of carrying approximately 2 million barrels of crude oil.

After LOOP was modified to also allow exports, the increase in cargo scale led U.S. crude oil exports to surpass 2 million b/d for 25 weeks in 2018 compared with just 1 week in 2017. In addition to LOOP, other U.S Gulf Coast export facilities in and around Houston and Corpus Christi, Texas, have been investing in increasing the scale of U.S. crude oil export cargos.

In the summer of 2018, as part of ongoing trade negotiations between the United States and China, China temporarily included U.S. crude oil on a list of goods potentially subject to an increase in import tariffs. Around that time, the difference between the international crude oil benchmark Brent and the U.S. domestic price West Texas Intermediate (WTI) futures prices narrowed: Brent prices went from $9 per barrel (b) higher than WTI in June to $6/b higher than WTI in July.